The NCW has written to the Delhi Police to expedite its action in the case against the 'Bulli Bai' app, floated for trolling and harassing the victims, to ensure that such crimes do not recur. 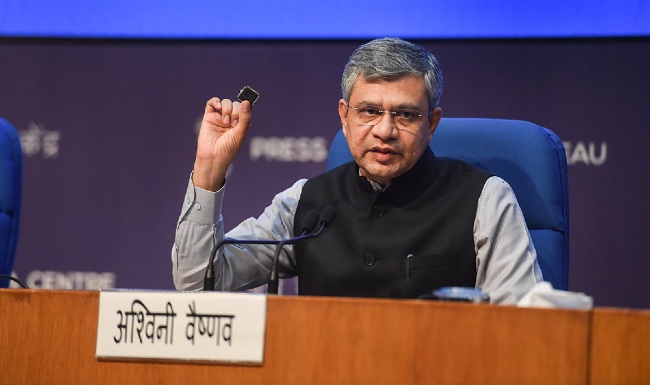 As outrage mounted over a dodgy app that has posted pictures of Muslim women, including many prominent personalities, "for auction", IT minister Ashwini Vaishnaw said on Sunday that the government is working with police in Delhi and Mumbai in the matter and the National Commission for Women too stepped in.

Hundreds of Muslim women were listed for "auction" on the app with photographs sourced without permission and doctored. It has happened for the second time in less than a year. The app appeared to be a clone of Sulli Deals which triggered a similar row last year.

Politicians, netizens and women's rights groups demanded strict action against the makers of the app and many blamed it on right-wing elements. Congress leader Rahul Gandhi called upon people to raise their voice against "'insult of women" and communal hatred.

"The insult of women and communal hatred will stop only when we stand against it in one voice. The year has changed, the situation should also change. It is time to speak up," Gandhi tweeted using the hashtag 'no fear'.

As the issue snowballed, IT Minister Vaishnaw tweeted on Sunday, "Government of India is working with police organisations in Delhi and Mumbai on this matter." Police of both the metropolitan cities have registered cases in the matter.

NCW chief Rekha Sharma, on Twitter, "noted" a tweet from a journalist whose photo was used in the app. The journalist also raised a complaint with the Cyber Cell of the Delhi Police. "@NCWIndia has taken cognizance of this incident. Chairperson @sharmarekha has written to @CPDelhi to immediately register FIR in the matter. The process must be expedited so that such crime is not repeated," the NCW tweeted.

"The action taken in both the cases must be apprised to the Commission at the earliest. A copy of the letter has also been sent to Dy Commissioner of Police, Delhi," the NCW said in another tweet. The Delhi Police has registered an FIR against unknown persons for allegedly uploading a doctored picture of the woman journalist on a website.

An official said Mumbai Cyber police has also registered an FIR against developers of 'Bulli Bai' app and Twitter handles that promoted this application. The case was registered on Saturday under sections 354-D (stalking of women), 500 (Punishment for defamation) and other sections of the Information Technology Act, he said.

The West region of Cyber Police registered the FIR against Twitter handle holders and the 'Bulli Bai' app developers hosted on GitHub," the official said. Vaishnaw has said GitHub has confirmed blocking the user and that the Computer Emergency Response Team (CERT) and police authorities are coordinating further action in the matter.

PDP president Mehbooba Mufti alleged that ''fringe elements'' who were targeting Muslim women online had the ''official patronage''. "Appalling that the criminals behind such derogatory & demeaning actions against Muslim women are given a free run," the former chief minister tweeted.

Shiv Sena MP Priyanka Chaturvedi had on Saturday flagged the 'Bulli Bai' app, seeking action from Mumbai police and Vaishnaw. The All India Progressive Women's Association alleged that "Hindu supremacists" were behind this and expressed solidarity with the victims.

Many netizens took to Twitter to raise the issue. "The Indian government, police, media, society at large ignored Sulli deals. And now you have #BulliDeals, a horrifying cruel depraved sadistic "auction" of Muslim women using their pictures. The more you ignore these things, the more sure you can be that it'll be your family soon," a netizen tweeted.

Once the app is opened, a Muslim woman's face is randomly displayed as Bulli Bai. Muslim women with a strong presence on Twitter, including journalists, have been singled out and their photos uploaded.