RT-PCR tests were conducted on the pilgrims as part of the measures to check the spread of the virus at Gangasagar Mela. 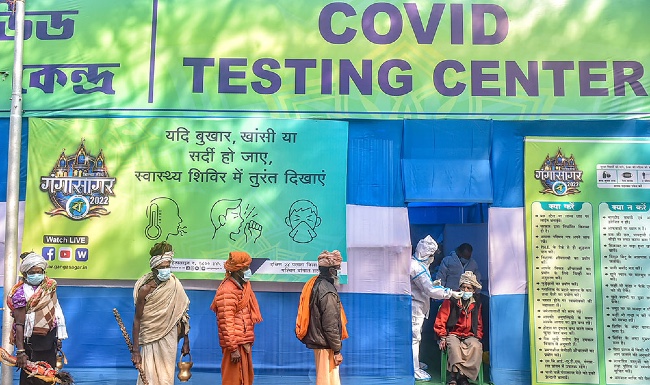 Over three lakh pilgrims have reached Sagar Island on the occasion of Makar Sankranti to take a holy dip at the confluence of river Ganga and the Bay of Bengal, and 0.63 per cent of them tested positive for Covid-19, an official said on Thursday.

A senior official of South 24 Parganas district administration said that the two-member committee formed by the Calcutta High Court to monitor adherence to COVID-19 norms at the fair inspected the site during the day.

The committee, comprising Retd Justice Samapti Chattopadhyay and a member of state legal services authority, asked the administration to prevent overcrowding, the official said. A total of 3.2 lakh pilgrims from West Bengal and elsewhere in the country have undergone RT-PCR tests at various embarkation points on the way to Sagar Island and only 0.63 per cent were reported covid positive, the official said.

State power minister Arup Biswas and women and child development minister Shashi Panja were camping at the spot, coordinating with the district magistrate and other officers to ensure that the fair passes off smoothly, he said. He also stated that the number of pilgrims thronging the island is relatively less compared to the previous years.

Shankaracharya of Puri, Nischalananda Saraswati, who visited the island, told reporters that unfair attempts to politicise the pandemic situation and the holy event have been made. He said that he and other seers were following the guidelines laid down by the government.

Three women pilgrims were separately airlifted to a Howrah hospital from the islands due to medical emergencies. While two of them - Gita Devi and Reena Krishna - are from Bihar and Uttar Pradesh respectively, Swarnalata Mondal hailed from Sagar Island itself.

Every year, pilgrims from various parts of the country and abroad gather at Sagar Island, about 100 km from Kolkata, to take a holy dip on the auspicious occasion of Makar Sankranti which falls on Friday this year. Chief Minister Mamata Banerjee on Wednesday urged the devotees to abide by COVID-19 protocols.