Over 90,000 teenagers get coronavirus jab in Himachal Pradesh

The vaccination campaign was launched at the Government Vijay Senior Secondary School (Boys) in Mandi with Class 12 humanities student Ravi Kumar becoming the first student to get the first dose of Covaxin. 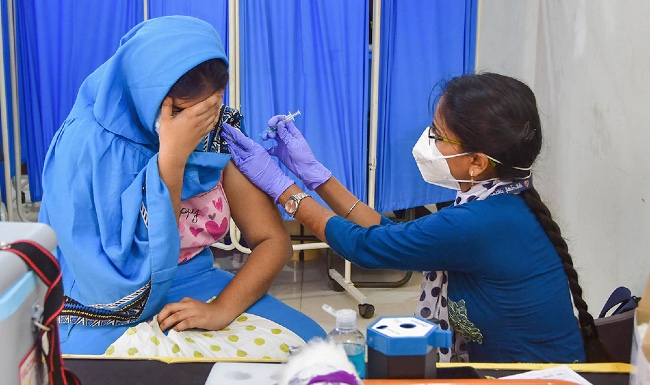 Over 90,000 teenagers were administered coronavirus jab in Himachal Pradesh on Monday, after Chief Minister Jai Ram Thakur launched from Mandi the COVID-19 vaccination campaign for those in the age group of 15 to 18, a government spokesperson said.

A total of 695 sessions were planned across the state in various schools. Teenagers in the eligible age group can get vaccinated at a nearby school. The spokesperson urged the teenagers to bring along with them their government ID card or student ID card at the vaccination session site for registration.

Meanwhile, interacting with media after launching the campaign from Mandi, Chief Minister Thakur appealed to people to come forward for anti-Covid inoculation to protect themselves from the virus. About 3.57 lakh youngsters in the age group of 15-18 years are eligible for vaccination in the hill state, he added.

The state government is keeping an eye on both the Delta and Omicron variants of the coronavirus and all preventative measures have been taken to check their spread, he added. MLAs Anil Sharma, Rakesh Jamwal and Inder Singh Gandhi, Mandi Mayor Deepali Jaswal, Deputy Commissioner Arindam Chaudhary, SP Shalini Agnihotri and Chief Medical Officer Dr Devender Sharma were also present on the occasion.