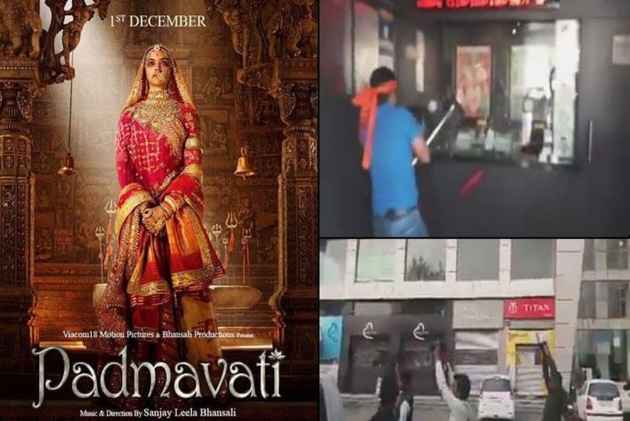 Nearly 50 activists of Shri Rajput Karni Sena on Tuesay rampaged through a cinema hall in Kota to protest the screening a teaser of Sanjay Leela Bhansali's next movie 'Padmavati', which the group say distorts historical facts.

They were also reported to have pelted stones at the theatre.

The activists dispersed after the police used light force against them. Eight people have been detained following the violence and proceedings were on against 30-40 other people, a police official said.

No case has been registered in connection with the violence.

Yadav said they were waiting for a complaint from the manager of the cinema hall.

The activists were angry at the screening of a teaser of 'Padmavati' - an epic drama based on the life of Rani Padmavati - at the theatre.

Following the protest, the screening of the teaser has been stopped at the theatre, the police officer said.

A few Karni Sena activists had submitted a memorandum to the theatre manager demanding him stop the screening of the trailer.

Earlier in the day, several activists of Sarv Hindu Samaj and Karni Sena marched through the Kota District Collect orate against the soon-to-be released film.

In their memorandum, the activists said the Hindu society will not tolerate distortion of historical facts and the cultural heritage and values of Rajasthan.

The movie would not be allowed to release until it is pre-screened to them, the memorandum read.