Popular artists operating in Basel include Dare, Smash-137, Bustart and Dream - all pen names for individuals’ wishing to keep their real identities a secret. 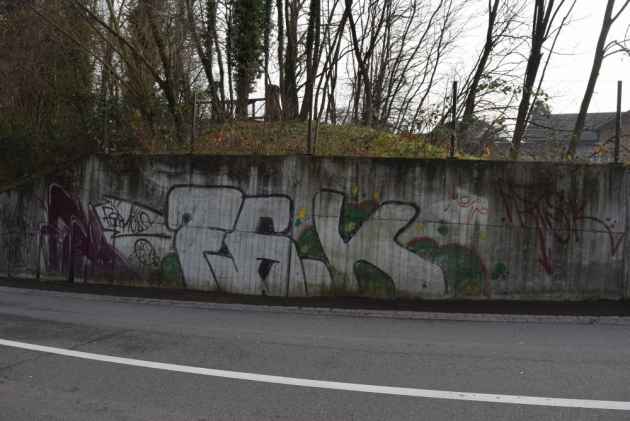 In January 2013, a 23-year-old was caught with spray paints in his bag in Basel, a city in northwestern Switzerland, situated close to the country’s borders with neighbouring France and Germany. The Basel Criminal Court convicted him for defacement of public property and sentenced him to pay 210 daily rates of 30 francs.

The youngster was simply one of around one hundred active graffiti artists in Basel.

Swiss cities are known the world over for their order and cleanliness - so it may come as a surprise that Basel, like many cities in Switzerland, has a prolific street art scene.

Developed in New York in the 1960's, graffiti or street art in general, was part of the greater counter-culture movement and stood in opposition to conventional social, political and economic principles of society. Thus, since its inception, it has been a vividly provocative art form associated with rebellion against society.

It takes up a confrontational stance against virtually any audience as it is an illegal art form with no authority over the space it claims. The consequences of this are two fold. Firstly, the illegality of the practise ensures that it is anonymous. Most street artists choose to keep their identities a secret and operate using pseudonyms. Every time they spray a wall, they leave behind their signature. Short pseudonyms are popular probably because they are easy to replicate, indicating a faster spraying rate and a reduced likelihood of being caught red-handed.

Secondly, the illegal nature of the art form accentuates transience. It ensures that graffiti occupies a temporary place on the walls of society as it is under constant threat of erasure by public authorities. Due to this, one of the most significant characteristics of street art is an unpredictable dynamism.

Electrified by the emergence of the breakdance culture coming out of New York in the 1980s, Basel’s teenagers were quick to tap into the accompanying graffiti scene and make it their own. Grabbing spray cans, they hit the streets and plastered the walls of the city, all part of an underground subculture shrouded in secrecy.

Popular artists operating in Basel include Dare, Smash-137, Bustart and Dream - all pen names for individuals’ wishing to keep their real identities a secret.

For instance, the street artist Dare was a man called Sigi von Koeding. He died in 2010 but in spite of this, there are several tags of his along the railway line, popularly known as the Basel line in street art circles. Dare’s case, however, is an exception. More often than not, people are unaware of the individual behind the pseudonym.

‘FTP’ is another acronym proliferating in the Basel art scene. The letters are devised by Dare and have acquired widespread significance. They stand for ‘Fuck The Police’, expressing strong anti-establishment sentiment. The acronym is scattered all over the city, where almost any sprayed wall has a tiny ‘FTP’ somewhere in its corner. Later, there surfaced derivations of this acronym, the most popular being ‘FYA’- ‘Fuck You All’.

Like most graffiti artists, Dare predominantly sprayed his pen-name. Similarly, anyone who wants to make a name for themselves on the street must spray their name on a significantly large number of walls before they are recognised within city circles. As Mike, who started his exploits in graffiti at the age of 14, states, “There is a side to graffiti that is a bit ego, another that it a bit territorial”.

In Basel, in particular, graffiti does not seem to be concerned with the overtly political. Rarely does street art engage with concrete political issues and take a stand on them. More often than not, the spraying revolves around an egotistical obsession with one’s own name, where artists are primarily concerned with spraying their pseudonym on as many surfaces as possible—perhaps a political act in its own right.

Andreas Pecnik, head of project Welcome, a Basel based organisation working to remove illegally applied paint from urban surfaces, agrees. According to Pecnik, the graffiti being practised by Basel’s youngsters is nothing but self-conceit. Removing it from urban surfaces “not only increases the quality of stay, but also enhances safety in public spaces”. To support his statements, Pecnik cites the Broken Windows theory which states that any small damage in a neighbourhood, such as a broken window or an unclean wall, promotes neglect of the entire neighbourhood and, in turn, encourages rowdy behaviour. If walls of a particular neighbourhood are sprayed with graffiti, people take that as license, for example, to urinate on the walls. “Sprayers are a lack of social control” says Pecnik, “and they need to be controlled.”

In an effort to control street artists, there have been an increasing number of initiatives to bring graffiti within the legal ambit. For instance, it is now possible to legally spray at a few designated places in Basel, including the Tramwendeschlaufe (Tram station) at Schänzli. Moreover, organizations like ‘Urbane Kunst’ (Urban Art) are attempting to overcome the covert nature of street art by organizing artist-led events, workshops, wall designs and other commissioned work. The organization represents a selection of local and international artists, and functions as the point of contact for patrons who wish to get in touch with artists. Inasmuch as this, it attempts to remove graffiti from the shroud of illegality and bring it out into the open by offering artists a platform to express themselves within the ambit of law.

However, many sprayers want no part of this new legality. They want nothing to do with money or the market; even commissioned work, for them, is a sign of betrayal.

When asked whether he would do commissioned work, the voice of Fabio—a resident Basel graffiti artist—gets louder. “The wall is painted and sealed and it should stay that way? No change! What's that for?” he asks. To him, a painted wall that stays the same is no more exciting than a gray one. “If they say: ‘Here, on these 20 meters you can paint, not more’, then I do not accept that” he states.

Fabio’s way of looking at things resonates with many street artists. Graffiti, without an element of underground subculture is, for them, not graffiti at all. It is simply painting on a wall. It is the illegality of the art form—associated with rebelling against, rather than conforming to, social norms—that causes artists to flock to it. As Fabio says, “Graffiti is not a hobby, it is a way of life.”