Asia Bibi's case hit the headlines after former Punjab governor Salman Taseer, who spoke out in support of her, was killed in 2011 in Islamabad by his police guard Mumtaz Qadri who was executed in 2016 for murder. 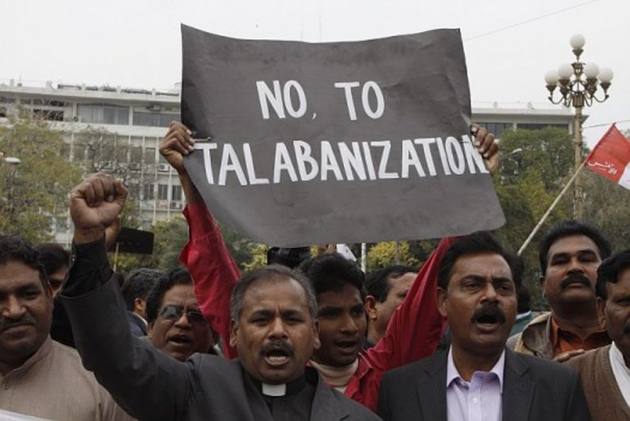 Pakistan's Supreme Court on Monday reserved its judgement on the final appeal against the execution of Asia Bibi, a Christian woman sentenced to death in a blasphemy case.

Asia Bibi was accused of committing blasphemy in 2009 and was convicted in 2010. Her appeal against the death sentence was rejected by the Lahore High Court. She had filed the final appeal to the apex court against the original conviction.

A special three-member bench of the Supreme Court comprising Chief Justice Saqib Nisar, Justice Asif Saeed Khosa and Justice Mazhar Alam Khan Miankhel reserved the verdict on the appeal of mother of five against the execution.

Chief Justice Nisar cautioned the media against commenting on or discussing the case until the detailed judgement has been issued.

No date has been announced by the court about when it will announce the verdict on the appeal.

Earlier, Asia Bibi's lawyer Saiful Mulook briefed the court that the case based on verbal clash between Bibi and a group of Muslim women was filed by a prayer leader of Katanwala in Nankana Sahib. He said the June 14, 2009 incident was reported on June 19.

"Are these things on the record?" the chief justice asked.

Mulook said no permission to file the FIR was taken from the district coordination officer or the district police officer, which was against the law.

The lawyer also highlighted the contradictory statements of the Muslim women witnesses.

"What we can conclude from your statements is that the prayer leader himself did not witness the incident as it happened," Justice Khosa observed. "No blasphemous language was uttered in the presence of the prayer leader."

"According to the prayer leader, a panchayat [to discuss the matter] was held in a house. It was said that 1,000 people were gathered for the meeting," Dawn reported, quoting the chief justice.

Asia Bibi and two Muslim women had a heated exchange, the lawyer told the court. The reason behind it was that the women had refused to drink water from the same dish as Asia Bibi.

The statements of the Muslim women, Asma and Isma, are contradictory, the lawyer said.

Chief Justice Nisar wondered whether the assistant superintendent of police's probe could be relied upon, to which the lawyer replied that police had wrongfully registered the case, according to Asia Bibi.

"The witness testimonies did not state that she had used blasphemous language for the Quran," he said.

"No blasphemous words were used at all. Asia, in her statement, said that she could not even conceive of committing blasphemy," Mulook was quoted as saying by the paper.

"She simply had an argument with two women. During that argument, they exchanged harsh words," the lawyer said.

Asia Bibi's case hit the headlines after former Punjab governor Salman Taseer, who spoke out in support of her, was killed in 2011 in Islamabad by his police guard Mumtaz Qadri who was executed in 2016 for murder.

Asia Bibi's supporters maintain her innocence and insist it was a personal dispute, and the Vatican has called for her release.

The apex court last time took up her appeal in October 2016, but had to adjourn it without hearing after one of the judges recused himself.

If the apex court bench eventually upholds Asia Bibi's conviction, her only recourse will be a direct appeal to the president for clemency.

If that fails, Asia Bibi could become the first person in Pakistan to be executed under blasphemy laws which were enacted by former military ruler Zia-ul Haq in 1980s.

Asia Bibi has already spent eight years in prison and her family has been subjected to continuous threats and harassment.