A single party will need at least 137 of the directly elected seats to be able to form the government on its own. 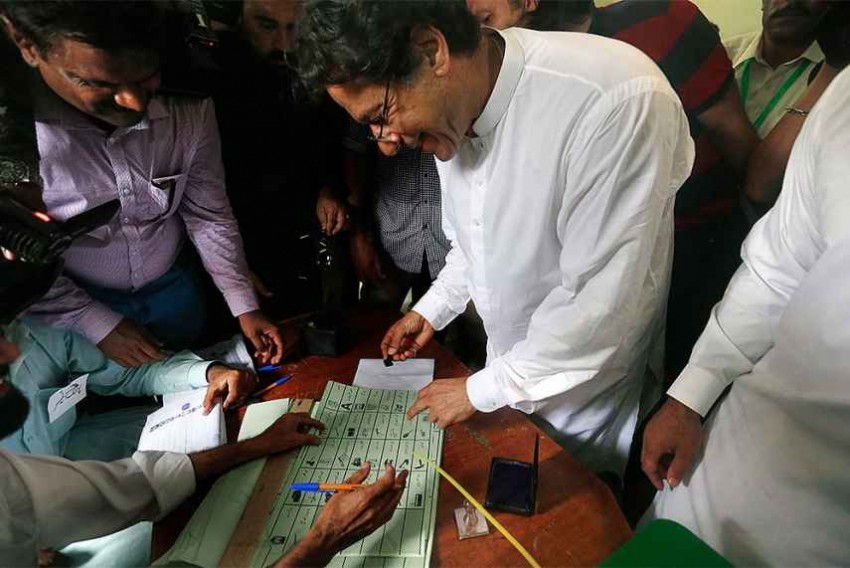 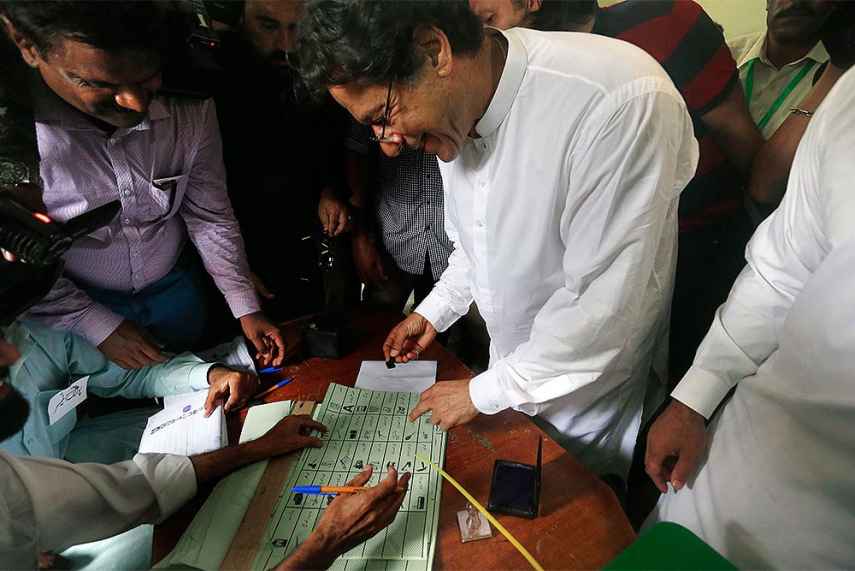 Imran Khan's Pakistan Tehreek-e-Insaf emerged as the single largest party in the National Assembly today with its candidates winning 76 seats and leading in 43 others according to the latest unofficial results and trends in the parliamentary polls, amid rival political parties' claim of "blatant" rigging.

A single party will need at least 137 of the directly elected seats to be able to form the government on its own.

The Muttahida Majlis-e-Amal (MMA) -- an alliance of traditional religious parties such as Jamaat-e-Islami, Jamiat Ulema-e-Islam-Fazl, Jamiat Ulema-e-Pakistan and Tehreek-e-Jafaria -- and Muttahida Qaumi Movement (MQM) were leading in eight seats each.

In the eastern city of Lahore, capital of Punjab province and the country's political heartland, PTI supporters rejoiced by waving flags and raising party slogans as results trickled in after the voting yesterday.

The Election Commission of Pakistan (ECP) officially announced the first result at 4.00am.

While final results are expected in the coming hours, initial outcomes show that the PTI was emerging as the single largest party in the National Assembly.

Pakistan's National Assembly comprises a total of 342 members, of which 272 are directly elected whereas the rest - 60 seats reserved for women and 10 for religious minorities - are selected later through proportional representation among parties with more than five per cent of the vote.

A party can only form the government if it manages to clinch 172 seats in total.

The two main parties - PML-N and PPP - have raised questions on the transparency of the vote counting process, alleging their polling agents were not allowed to verify vote counts as is mandated by law.

PML-N president Shehbaz Sharif, who is hoping to become the next prime minister after the jailing of his brother and former prime minister Nawaz Sharif in a corruption case, rejected the election results, alleging "blatant" rigging.

He did not say who he believes could have rigged the polls, but allegations of manipulating the elections have been made against the country's influential military.

"Some five other parties including the PPP have raised the rigging issue in polls. After consulting them, I will announce the future course of action. Pakistan has suffered today," Sharif told journalists.

He has convened a meeting with other parties this evening to discuss the issue and formulate a common strategy.

"We will fight this injustice and use all options," he said, adding that there has been a "blatant violation" of the mandate.

He, however, acknowledged that the delay in announcement of election results has "caused some annoyance". He stressed the delay was on account of a new system - Results Transmission System - introduced by it.

Asked about the doubts and the allegations, he said: "We will prove ourselves that we did our job right."

"These elections were fair and we have not received any complaint. If anyone has proof, we will take action," he asserted.

The provincial trends showed that the PTI was leading in 120 seats in Punjab followed by the PML-N with 119 seats in the provincial assembly of 299 members.

In Sindh, the PPP was heading towards a two-thirds majority in its traditional bastion. The party was leading in 72 seats according to the latest trends available for 113 of the provincial assembly's 131 seats.

In Khyber-Pakhtunkhwa, the PTI was heading towards a two-thirds majority with its candidates leading in 67 seats. The KP assembly has 99 seats.

The election marks the second democratic transition of power in the nation's 70-year history. The military has ruled Pakistan through various coups for nearly half of the country's history since independence in 1947.

The run up to the elections had seen a massive crackdown on the media and allegations that the military has secretly backed the campaign of Khan while targeting his political opponents.

The ECP was also criticised for deploying the Army both inside and outside of polling stations.

Controversy has also arisen over allowing militant groups to participate in the election. The leading among them are Mumbai-terror attack mastermind Hafiz Saeed-led banned Jamat-ud Dawa's candidates who suffered humiliating defeats.

Indian Student Killed In Australia After Date With Teenager