'There is no 'safe haven' for terrorists on our soil' 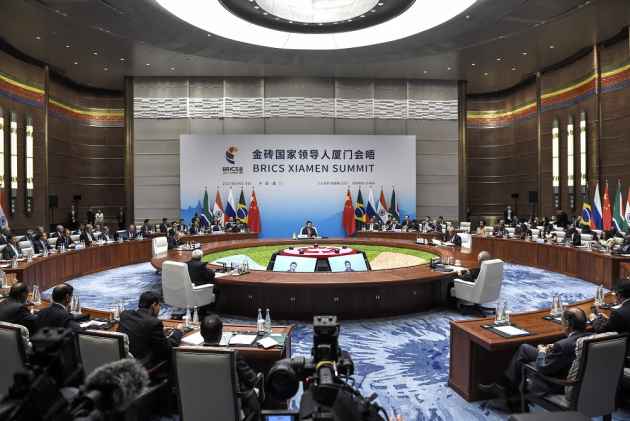 Pakistan on Tuesday rejected the BRICS declaration saying that there was no 'safe haven' for terrorists on its soil.

Pakistan's Defence Minister Khurram Dastgir dismissed the BRICS declaration naming terrorist groups in the region by leaders of member countries at the BRICS Summit in China on Monday.

"We reject the declaration [released by member countries at the BRICS Summit, Geo News quoted Dastagir as saying during a meeting of the National Assembly's Standing Committee on Defence.

Highlighting that 40 percent of Afghanistan is a safe haven for terrorists, the minister said Pakistan has taken action against all groups on its soil and only the remnants of some are left.

He further said that the Pakistan will consult regional partners and then proceed to the US for talks on the recent 'anti-Pakistan' comments by US President Donald Trump.

Dastagir said this will result in better engagement as Pakistan is in favour of resolving all matters peacefully since any American action in Pakistan will cause instability in the region.

BRICS leaders on Monday unveiled the Xiamen Declaration in which member countries unequivocally condemned terrorism in all of its forms and manifestations and called upon all states to adopt a comprehensive approach in combating the menace, including countering radicalisation, recruitment, and movement of terrorists, including foreign terrorist fighters.

The Xiamen BRICS Declaration signed by the BRICS members specifically stated, "BRICS express concern on the security situation in the region and violence caused by the Taliban, ISIL/DAISH, Al-Qaida and its affiliates including Eastern Turkistan Islamic Movement, Islamic Movement of Uzbekistan, the Haqqani network, Lashkar-e-Taiba, Jaish-e-Mohammad, TTP and Hizb ut-Tahrir."

"BRICS deplore all terrorist attacks worldwide, including attacks in BRICS countries, and condemn terrorism in all its forms and manifestations wherever committed and by whomsoever and stress that there can be no justification whatsoever for any act of terrorism. We reaffirm that those responsible for committing, organising, or supporting terrorist acts must be held accountable," it added. (ANI)