Pakistani Minority Persecution Issue To Be Raised At US Capitol Hill

Members of the US Senate and House of Representatives, representatives of various ethnic and religious groups in Pakistan, members of think tanks and South Asia experts will attend and speak at this event. 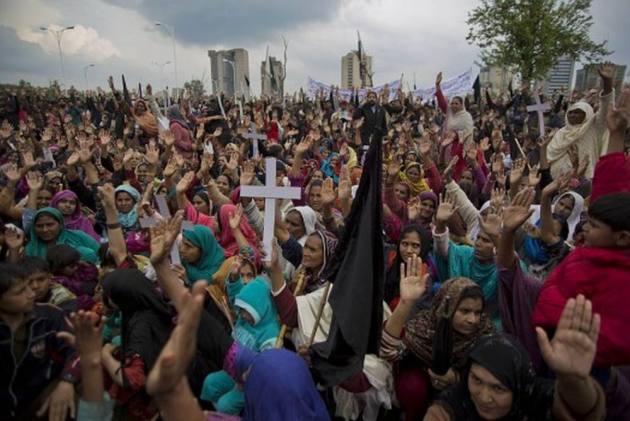 South Asia Minorities Alliance Foundation (SAMAF) and Voice of Karachi (VOK) will jointly hold an event at the United States Capitol Hill on September 5 to highlight the issue of religious freedom and minority rights in Pakistan.

During the event titled 'Day on The Hill' solidarity will also be shown with the Afghan people, United States troops and their families, as announced by VOK and SAMAF Chairman, Nadeem Nusrat in a statement.

Members of the US Senate and House of Representatives, representatives of various ethnic and religious groups in Pakistan, members of think tanks and South Asia experts will attend and speak at this event.

In the statement, Nusrat said, "Since the 1980s, the restive region between Pakistan and Afghanistan has become a safe-sanctuary for some of the world's most wanted men, including Osama bin Laden and Mullah Omar. Not many people know that it was a plot hatched inside a cave in Afghanistan that resulted in the 9/11 attacks in the mainland USA which killed around 3,000 Americans."

Despite United States' involvement in its longest running war in Afghanistan and the presence of US troops on Afghan soil, the Pak-Afghan border region remains extremely volatile, as thousands of armed Taliban fighters use it as a safe haven.

Nusrat further noted that the 1947 partition of India saw one of the biggest mass migrations in human history. "The Soviet invasion of Afghanistan was followed by another mass exodus from Afghanistan to neighboring countries. The growing religious and ethnic persecution coupled with lack of political stability in South Asia, Pakistan in particular, is a recipe for disaster. Failure to assess and prevent this might lead to another refugee crisis in the region. The world needs to react before it is too late," he added.

He also highlighted that religious and ethnic minorities are facing an imminent existential challenge in Pakistan, a country where the freedom of religion, freedom of speech, freedom of press, freedom to have a fair trial, and freedom of assembly, is all under threat. In Pakistan, the lines between religious and ethnic persecution are often blurred, as the state machinery is using religious extremists to suppress ethnic minorities, such as Mohajirs, Balochs, Pashtuns and the people of Gilgit - Baltistan and Hazara.

Pakistan's biggest city and its financial hub, Karachi, has seen a steady rise of religious extremists. While Pakistani military establishment continues to brutally crush secular Mohajir leadership and their political party, religious extremists have been allowed to carry out their campaign of terror and religious hatred in the city.

Nusrat believes that the upcoming event at Capitol Hill will send out a strong message to the world that oppressed minorities of South Asia, Pakistan in particular, are united for their rights and stand in solidarity with the people of Afghanistan and US troops. He concluded that the world needs to realise the miseries and injustices that religious and ethnic minorities are facing in Pakistan.

SAMAF and VOK are advocacy groups based in USA, striving to bring global attention to the injustices, persecution, and ethnic and religious cleansing that minorities are facing in South Asia, particularly in Pakistan.