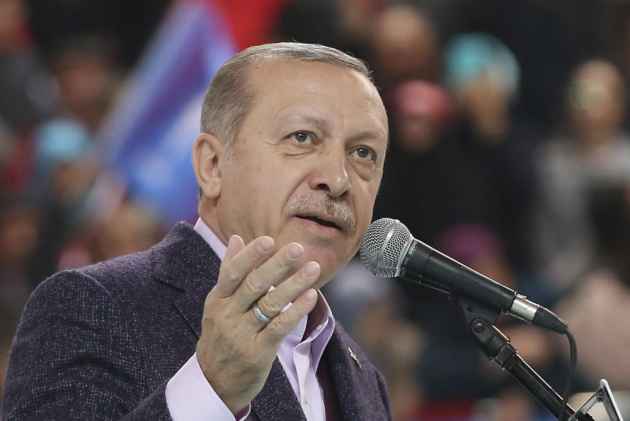 He also vowed to use "all means to fight" against the US recognition of Jerusalem as Israel's capital.

"Palestine is an innocent victim... As for Israel, it is a terrorist state, yes, terrorist!" Erdogan said in a speech in the central city of Sivas.

"We will not abandon Jerusalem to the mercy of a state that kills children."

His speech came days after US President Donald Trump recognised Jerusalem as the capital of Israel, angering Palestinians and sparking protests in Muslim and Arab countries.

Four Palestinians were killed and dozens injured in violence following the US announcement.

Rockets were fired from Gaza and Israeli warplanes carried out raids on the territory.

Erdogan earlier described the status of Jerusalem, whose eastern sector Palestinians see as the capital of their future state, as a "red line" for Muslims. He called Trump's declaration "null and void".

The Turkish president has used his position as the current chairman of the Organisation of Islamic Cooperation (OIC) to call a summit of the pan-Islamic group on Wednesday.

"We will show that applying the measure will not be as easy as that," he added today.

During his speech, Erdogan held a picture of what he said was a 14-year-old Palestinian boy from Hebron, in the Occupied West Bank, being dragged away by Israeli soldiers.

Turkey and Israel normalised their relations in recent years but Erdogan has continued to defend the Palestinian cause and has regularly criticised Israeli policy.