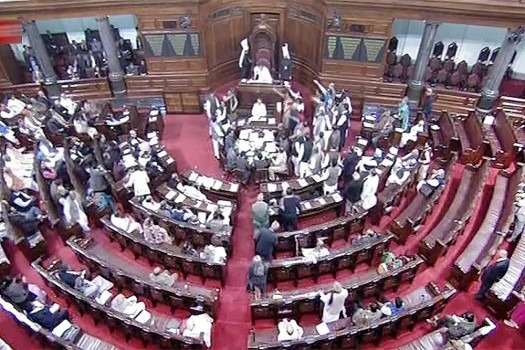 A united Opposition today disrupted proceedings in the Lok Sabha and the Rajya Sabha protesting against controversial comments reportedly made by Union Minister Anantkumar Hegde on changing the " Constitution" and do away with the term secularism.

Congress, SP and BSP members trooped into the Well of the RS shouting slogans seeking removal of Hegde and forcing Chairman M Venkaiah Naidu to adjourn the proceedings till 1200 hours.

The trouble started during the laying of the official papers on the table of the House as opposition members shouted "shame, shame" when Hegde, who is Minister of State for Skill Development and Entrepreneurship, rose to lay the papers listed against his name.

Leader of the Opposition and senior Congress leader Ghulam Nabi Azad sought a clarification from the Minister as he could leave the House soon after laying papers.

True to this, Hegde sat in the House for a while listening to opposition protests against his controversial statement that the BJP would change the Constitution by excluding Secularism from the preamble. Soon thereafter, he left the House.

Azad asked if a minister does not believe in the Constitution, does he has a right to remain as a minister.

Sukhendu Sekhar Roy (TMC) said secularism is inscribed in the preamble of the Constitution and asked if a minister is allowed to denounce the same preamble in public.

Naresh Agarwal (SP) said the Constitution is the Ramayana and Gita of democracy and any minister who abuses it and its founder Baba Saheb Ambedkar should be removed. At this, Naidu interjected to ask members not to bring Babasaheb Ambedkar into the controversy.

As soon as the LS met for the day, some Shiv Sena members raised slogans against Pakistan, apparently over the treatment of the family members of Indian national Kulbhushan Jadhav, imprisoned there. Some BJP members also joined them in raising slogans like 'Pakistan murdabad' (down with Pakistan).

Leader of Congress in the Lok Sabha Mallikarjun Kharge raised the issue of remarks by Hegde, following which his party members rushed to the Well raising slogans such as 'Ambedkar ka apman nahin chalega' (We will not tolerate the insult of B R Ambedkar -- one of the key framers of the Constitution). They also demanded "removal" of the minister apparently from the Council of Ministers.

At a function in Karnataka on Sunday, Hegde, the Minister of State for Skill Development, had reportedly said people should identify themselves by their religions and "those who, without knowing about their parental blood, call themselves secular, they don't have their own identity...They don't know about their parentage." He had also said "we are here to change the Constitution and we'll change it."