Despite claims, closer scrutiny of the data shows that the actual farmers are not getting enough support. 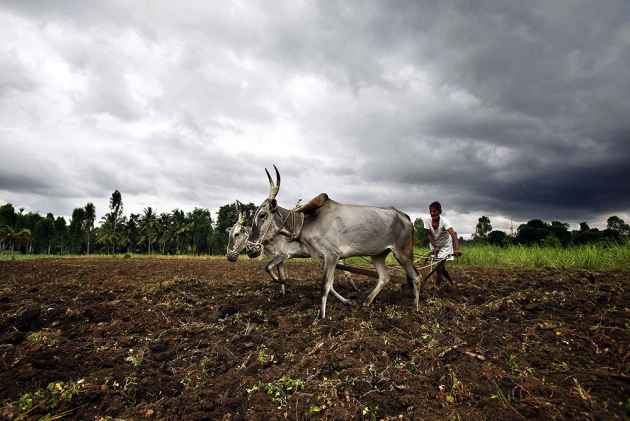 There are tall claims on the farm credit front while there has not been any let up in the agrarian crisis, indicated chiefly by the continued farmers' suicides in different parts of the country. Yes, there is enough evidence for the government to show a heavy flow of credit to the farmers through numerous institutional channels; official data makes one believe, prima facie, that the farmers are getting their due share.

Look at the allocations and achievements. Way back in its 2004 budget — strictly speaking the budgets have nothing to do with bank credit though — the government announced its goal of doubling the institutional credit to agriculture within three years. But that happened just in two years! Enthused at this, every subsequent budget continued to increase the targets and the finance ministers invariably bragged about surpassing each one of them. The targets during the last three years — 2012-13 to 2014-15 — were, 5.75, 7.00 and 8.00 lac crore rupees respectively. All of them were exceeded. The 2015-16's goal of Rs.8.5 lac crore, too, is not going to be missed in all probability.

These sums, by no means, are small; they accounts for about 7 per cent of the Gross Domestic Product (GDP), more than half of agriculture's contribution to GDP in a given year. In other words, the macro picture suggests that the institutional initiative, at the government's instance, has resulted in the supply of a credit input equal to half of agricultural output. What more do our farmers need then?

The institutional arrangements and policy frameworks, too, look very impressive. There is a wide network of branches of Commercial Banks, Regional Rural Banks, Cooperatives and Microfinance Institutes besides other types of institutions like Local Area Banks. The total of 151 Commercial Banks (including RRBs) in India have 1,17,218 branches as of March 2014. Of them, 45,177 are in rural areas. In the cooperative sector, there were 1081 offices of the State Cooperative Banks and 13,655 offices of District Cooperative Banks besides 93,488 Primary Agricultural Societies (PACs) as of 2012-13. Similarly, about 160 microfinance institutions are operating with their 11,687 branches in 561 districts of 28 states and 5 union territories of the country, since March 2014.

The policy making and implementation arrangements are not weak either. The Reserve Bank of India fixes targets to agriculture; it has been 18 per cent of the adjusted net bank credit. A fair share indeed! Even the recent policy on priority sector, although dubbed by some as retrograde, has not altered this ceiling.

To fix and monitor the bank-wise targets, there are state level bankers' committees. Also the NABARD, the apex bank has the mandate to ensure agriculture and rural development, as its very name suggests, in the country.

But a closer scrutiny of the data reveals that the actual farmers are not getting enough support despite all these arrangements and claims. The Commercial Banks' credit to agriculture, as per the latest available RBI data, aggregated to Rs.5.81 lac crore by March 2013. This apparently huge sum equals to just 10.52 per cent of the total bank credit, much less than the 18 per cent target set by the RBI.

In fact banks have never been serious about achieving the 18 per cent target. They have some government approved escape routes like investing their priorities sector shortfalls in the Rural Infrastructure Development Fund (RIDF) etc.

More worrisome, even this low 10.52 per cent farm credit has not entirely gone to benefit the agriculture in rural areas. The rural farm credit gets only Rs.2.48 lac crore which equals only to 4.49 per cent of bank credit while the remaining 6.03 per cent — more than half of the farm credit — is apportioned by semi-urban, urban and metropolitan farmers.

Again, the small, marginal farmers who constitute the overwhelming majority of the farming community — 85.30 per cent in terms of farm holdings and 44.55 per cent in the area operated — do not get their fair share. So is the case with tenants who account for 40 per cent of the actual cultivators. These groups neither get their share in proportion to their holdings nor to the area operated.

The RBI's March 2013 data shows that the small loans, of below Rs.2 lac limit, add up to Rs.2.81 lac core, that is 5 per cent of the total credit supplied by the banks. The small and marginal farmers' share in this could naturally be much less than this 5 per cent.

Apathy of the specialised agencies

The agencies specialised in serving the farmers, particularly the poor among them, have drastically moved away from their goal. The cooperatives which were known to be synonymous with the institutional credit for agriculture before the nationalisation of banks are losing their relative importance. Their share in institutional credit has come down from 62 per cent in 1992-93 to 17 per cent in 2013-14.

Share of Different Institutions in the Formal Agricultural Credit in India (Amount in Rs. Crore)

Similarly, the Regional Rural Banks which came into being in 1975 with the mandate of providing finance exclusively to the poor — small farmers, marginal farmers, agricultural labourers and others below poverty line in rural areas —  have undergone a drastic change whereby they have lost their right to be called social banks and have transformed into pure commercial banks — in fact more commercial than the most commercial banks. Their lending to the poor has come down to 15 per cent from 100 per cent.

To add to this, the government and RBI have created an enabling environment for commercial microfinance to thrive through financing to the poor. The MFI have earned a profit of Rs.6,560 crore in a single year 2013-14 , on their gross outstanding portfolio — loans given to the poor — of Rs.33,517 crore.

The MFI borrow cheap, mostly from the banking system, and flourish on charging exorbitant interest from the poor although the poor people's activities hardly generate any surplus. In fact, a farmer with as high as 25 acres of land is getting a paltry monthly income of Rs.5,681 as per the Arjun Sen Gupta Committee report. Worse still, the small and marginal farmers spend 36 per cent more on farming than their incomes from it.

There are moves to further strengthen the MFIs while distancing the poor from the commercial banks' credit. The recent change in the priority sector norms, for instance, have removed the distinction between direct and indirect agricultural credit and facilitated the way for sanctioning more loans to big farmers and the corporates in the name of agriculture.

These trends of declining cheap and easy credit to farmers have the portents of deepening the agrarian crisis. If food and employment securities of the people are of any concern, the government is left with no choice but to reverse them and strengthen the lending institutions to increase, not weaken, the support to the farmer in the country. Are we hoping against hope?