It is not yet clear that how much time it will take for restoration of the tracks. 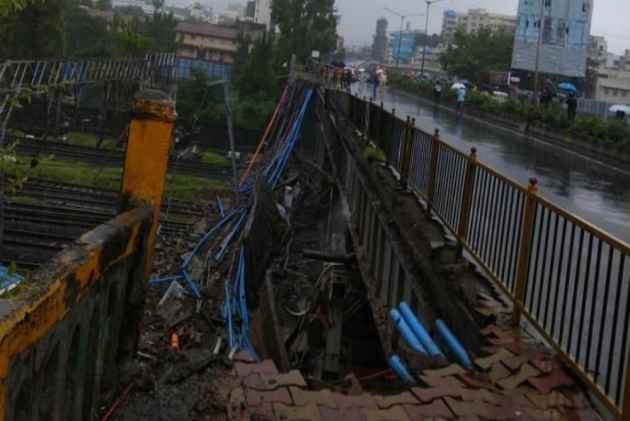 Train services of the Western Railway here came to a halt after a part of a footover bridge (FOB) collapsed this morning, an official said.

No casualties were immediately reported.

Overhead Equipment (OHE) have been damaged and a team of engineers have swung into action to restore it, chief PRO of Western Railway Ravinder Bhakar told PTI.

"A part of the FOB has collapsed which resulted the halt in all our up and down services of Western Railway. Our officers have reached to the spot and accessing the situation," he said.

Part of Gokhale Bridge, connecting Andheri East to West has collapsed affecting the overhead wires too.Trains on the western line are affected.BMC,Fire Brigade as well as RPF Staff & Officers are deputed on spot for support.Traffic above & below the bridge is stopped for now pic.twitter.com/LMcKmwyDCh

An official from Disaster Management Unit said that fire brigade jawans and other agencies have been mobilised to clear the debris.

"Around 7.30 am, the part of East Western Railway FOB fell down towards Andheri east station. Fire brigade, Mumbai police and ward staff have rushed to the spot," said the official adding no casualty was reported so far.

He also said that it seems that incessant rain caused cracks in the FOB, which later resulted in the collapse.

Thankfully, no train was passing beneath the track," he added.

Meanwhile, the stoppage of the Western Railway suburban services have paralysed the city.

Prashant Ghag, who works in media house at Fort said, "When I reached Borivili to board a Churchgate bound train, I came to know that all the lines of Western Railway have come to halt. Therefore, finding no alternate means of commute in such a rainy season, I had to return at my home."

Dabbawalas, who supply Tiffin boxes to the working professionals, have also expressed their inability to work today, as the all the four lines of the Western Railway suburban services have come to halt.