Subramanian Swamy’s valedictory address at a Goan college didn’t quite go as planned. 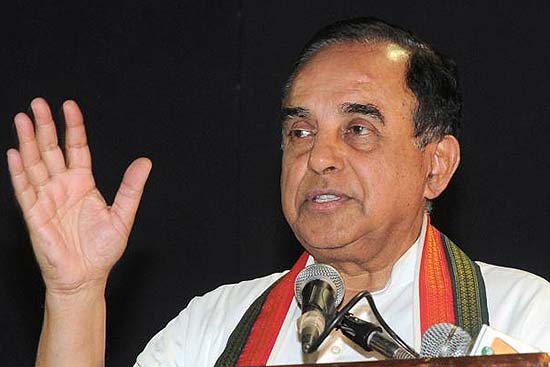 Part tragedy, part farce, the event was presaged for doom the previous day, when Swamy tweeted “I shall address a Sangh related public meeting in Goa on “ISIS Threat: India’s Options”. It was obvious he comprehensively misunderstood it was actually a management studies festival attended by young students of all religions and backgrounds.

The next day, a typically Goan pluralistic crowd of higher secondary and undergraduate students sat dumbfounded through a blistering, highly inappropriate sectarian harangue by Swamy, who ignored the students interests, and focus of the festival, and instead played to the middle-aged cheering section (the talk was open to walk-ins) who filled the rest of the auditorium at the Charles Correa-designed Kala Academy complex on the Panjim waterfront.

It was hard not to feel bad for the youthful business studies enthusiasts, who had clearly worked very hard to make their annual festival the best in the history of their college. The zealous, diligent volunteer who ushered us to our seats, which were next to a contingent of shy, uniformed 12th-standard students, said to us proudly, “no other management college in Goa has ever achieved anything of this quality.” Then he admitted his organizing committee’s unanimous first choice of speaker had been Anand Mahindra. But the tycoon proved unavailable.

So it was Swamy, striding out rather incongruously to the swelling accompaniment of The Ramones anthem, ‘Blitzkrieg Bop’, flanked by stern-faced submachine gun-wielding guards, thus immediately inviting an unflattering contrast to Defense Minister Manohar Parrikar, who freely circulates in Goa without anything like such ostentatious heavy metal.

The former Cabinet Minister sat through an impressively slick student-produced video which raced through synopses of the leading economies of the world, but then made no mention of it or the students’ interests and instead jumped right into his analysis of ISIS. According to Swamy, in two or three years this “world’s richest terrorist group” will likely be at India’s borders. Then he started to outline a series of increasingly outlandish recommendations on how to cope with the threat, and things began to go haywire.

The audience in Goa quickly sorted itself into two camps. There were the students, but they were outnumbered by a crowd of much older Swamy fans which was waiting eagerly for favourite applause lines about Muslims and the Nehru family. When these slams emerged, as they did on cue, there was much clapping and hooting from the elders. But when Swamy – to his credit -- returned again and again to a stern anti-caste message, and praise for Dr. B. R. Ambedkar, it was only the students applauding, while many seniors looked furious and confused.

It is when Swamy strayed dangerously into areas far from his academic expertise (his PhD from Harvard is in Economics) that the students became restive and much more alert. The 76-year-old made the fatal mistake of repeating a very old canard, “NASA has made study of Sanskrit mandatory because it is the most computer-friendly language” and urging the audience to “just go home and Google it.” That is the exact moment he lost the students for good, as dozens of smartphones lit up all around the auditorium, and the search engine informed the audience that Swamy was in fact peddling a much-discredited hoax.

Falsehoods flew fast, but the fact-checking fingers were even fleeter. While middle-aged faces in the audience bore progressively rapturous expressions, the students were shaking their heads, first skeptical then furious at the gibberish on parade. Swamy said all Indians had exactly the same DNA. But in front of me a student searched “genetic mapping of India” and the first link she found was to Nature magazine, which said “there are populations that have lived in the same town and village for thousands of years without exchanging genes”. She looked up North-East tribes like the Khasis, and found they are not actually “from Thailand” as Swamy claimed.

In Scroll.in yesterday, Kai Friese wrote “the fantastical charlatanry of Hindutva “history” is central to the new National Project”. It was this unrelenting perversion of Indian history, delivered in such strident tones in broad-minded, deeply syncretic and tolerant Goa, which was the most repulsive aspect of Swamy’s address. The students and many other members of the audience visibly reeled. They were clearly offended by the message of exclusion that went against the bedrock of their own culture and identity.

In Swamy’s retelling of “correct Indian history” the only people who count who ever fought for India were Hindus. But Goa’s anti-colonial resistance was never sectarian, and was even often led by Christian priests, who repeatedly conspired to expel the Portuguese. This, after all, is a contemporary culture where endless streams of Hindus devotedly attend church feasts and festivals, and countless Catholic families pay sincere respects to the deities of the beautiful temples across the state. All of this is contrary to Swamy’s idea of India. Goa, Goanity – what the Goans call ‘Goenkarponn – has no place in his rigidly narrow conceptions.

And so the question and answer session was an unusually fraught tug-of-war between irate students, and the fawning Swamy admirers, with a faculty member trying hard to keep out any possible discordant note (though Swamy – again to his credit – was quite happy and willing to debate anyone).

When one student rose, all soul patch and flashing eyes, to demand to ask three questions, he was shut down before he could even properly ask one. Then the moderator quickly called for a final question. A young man got the mike, and coolly asked Swamy, “You’ve been criticizing the British all this time, isn’t there a contradiction that you’re speaking to us in English?” It was the kids turn to hurrah. Behind me, I heard, “someone should thrash that rogue.” Looking back to see who it was, instead I saw two girls high-fiving each other with wide grins on their faces.