Pass The Dongle, Will You? 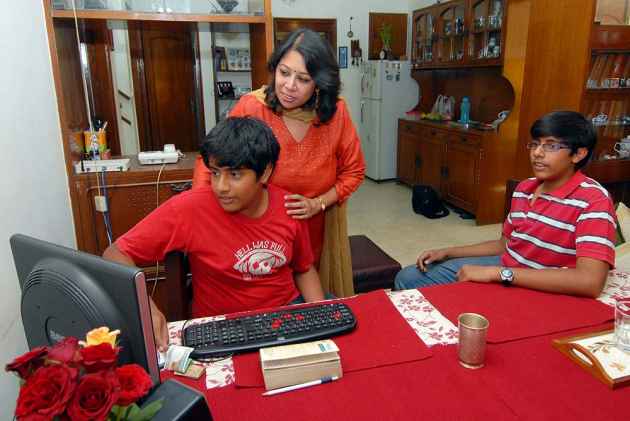 Summer's here! And at least in half the country, it means summer vacations are here. In other words, the stage is set for happy families to gather round and bond over morning walks and bicycle rides around the neighbourhood and pre-lunch expeditions to bookstores and post-lunch board games and evening badminton and joyous, cordial dinnertime discussions over where to go on holiday. Right?

'Of course!' you might say in response, but be warned that this will cause everyone around you to mutter 'Out in the sun too much yesterday, was she?' to each other while advising you to drink lots of coconut water and go lie down for a bit. If you responded, however, with a crazy-eyed 'HA!' and followed it with a burst of high-pitched hysterical laughter, rest assured that those same people will clutch you to their bosoms with glad cries of recognition.

Don't get me wrong. Every loving, well-meaning parent —  that's us, at least in our own heads; best not to ask for a second opinion —  really does want to do everything the ads tell us those perfect families do. In the stressful 'Final Exam' days leading to the holidays, visions of the perfect summer for the kids proliferate in our heads like the number of likes on someone else's irritatingly happy-looking family picture.

But the very real joys of no-alarm, no-morning-rush, no-lunch-to-pack and other such luxuries do not last. Rose-tinted visions have a way of imploding when they come under sixty hours (give or take a little, depending on your threshold) of heavy shelling from 'Can I have something to eat?' 'Can I have something to drink?', 'Can I have some money for xyz?' and 'I'm bored.' Not to mention the evil twins 'Can I watch TV?' and 'Can I go online?' Actually, scratch that. Television is passé, and essentially harmless. It is only the internet —  that millennial den of iniquity —  that we have to worry about.

Seriously, though, is the internet such a corrupting influence? Is all the hand-wringing over the loss of imagination and the death of the much-vaunted 'joy of discovery' in our children, because alas and alack, we live in an age when information about anything and everything becomes available in a ridiculously tiny fraction of a second (always assuming, of course, that your neighbor has unsecured and super-speedy wifi), really justified?

Most certainly not. In fact, letting your teens spend long hours staring into a computer screen these vacations will help them, and —  surprise, surprise —  you, reap hitherto unsuspected benefits:

You are, after all, helping them get a head-start on preparing for the real world, instead of being unnecessarily draconian about their 'device time' like less well-advised parents are wont to do. Then get yourself a cup of chai, open your laptop, google multiverse —  or kabbala, or hypergeometric distribution or whatever other incomprehensible concept you have wanted to figure out forever, take a lesson in making choux pastry off youtube, update your whatsapp profile picture, download the latest crime bestseller onto your Kindle, and start having your first real summer holiday in years.