The titular Maharaja of Travancore, the younger brother of the last ruling monarch of the Kingdom of Travancore, was much more than the Custodian of the richest temple in India, the Sree Padmanabha temple in Thiruvananthapuram. 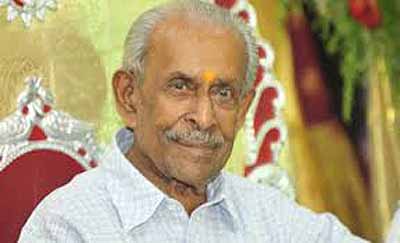 Children love adults who pamper them. Cadburys Milk chocolate bar was a treat -- as it still is -- nearly half a century ago. My great uncle, Uthradom Thirunal Marthanda Varma (22 March 1922 – 16 December 2013), used to conjure up a chocolate bar out of his pocket each time he came to Trivandrum. Being a show man and a great raconteur he would make a production of this simple gift, holding it up high and making me jump ineffectually to reach it, clamouring for it all through, till he would grin and swoop it down into my greedy, grubby hands. He would then run to his elder brother Chittira Thirunal Rama Varma's 'office room' in Kaudiar Palace and do a low Namaste. Chittira Thirunal would then run his hands down his brother's back and both of them would look absurdly happy to be with each other. Chittira Thirunal was his brother's hero and only Lord Padmanabha got a lower, more worshipful namaste. Then they would go and see their mother. She used to call her youngest born 'Peach', a name that has resonated down for decades, as Gouri and Prabha his twin great great nieces call him 'Peach ammava' [uncle].

'Peach' was the pet of the family. We, his grand niece and nephews, used to listen with wide eyed admiration to Peach ammavan's childhood escapades which Chittira Thirunal used to regale us with. When he was a little boy, his mother took him to London. One of the doctors there declared him to be too fat. A diet and exercise regimen was put in; the former he hated, the latter he loved. He used to go to the palace cooks and beg for 'normal' food rather than the salads he was put on and they used to indulge him, heaping hot Indian food on his plate. Though he became fitter thanks to his long walks, the doctor and his mother found that he was not looking much thinner. They asked his tutor to go get his weight measured. To his horror he was four pounds heavier. On the long walk back to the hotel, he was pondering how to deal with the damning paper in his pocket till he got the bright idea of sailing it away as a paper boat on the Thames. Uthradam Thirunal loved to feed people and one of his greatest joys was to have people over for a meal. He would also add something special to the table like a traditional Kerala snakeboat shaped dish to contain the rice long before theme parties became the vogue.

Like his sister Karthika Thirunal Lakshmi Bayi, he too had a highly developed sense of beauty. He used to say that he fell in love with Radha Devi's studio photograph first and then decided to seek her out to marry her.

The very first horse I sat on was his. He kept dogs too, a love he shared with his elder brother. His sister loved horses and hated dogs. The other two great loves of his life were books and photography. His collection of black and white photographs are phenomenal. When technology was still not fully developed,  he took aerial pictures of Shri Padmanabha Swamy temple and Kaudiar Palace and pictures of the now famous Sabarimala temple, when it was but a little forest shrine. His collection of books was huge. One of the delights of spending time in his Bangalore house was raiding his library. From ancient children's books like Misdoings of Mickey and Mac, to detective stories to the Upanishads and their interpretations, the range of subjects was colossal. He had carefully preserved an autographed book of Agatha Christie's in Bangalore.

When his guru Shri Ananda Mayi Ma came to stay with him, all of us went to stay with him as well. I was sharing a room with my grandmother, his sister Karthika Thirunal. I pestered him to open up the library which was kept locked as there were so many people around. Uthradam Thirunal had a distinctive spidery hand writing and there was a bright yellow file of jokes, hand- written by him. With a rapid glance inside, he swooped the file away telling me with his customary twinkling eyes, 'These jokes are certainly not for you.' Which, of course, made me doubly eager to read them. Just then, his wife's nieces came up and in that meeting I gently took away the file from his hand and popped into my bedroom. I sat up half the night quickly trying to finish as much of the file as I could, because I was sure that he would definitely not allow me to keep the file had he known about it. What I had not factored in was my grandmother, who was an early riser, glancing through the file. She came down for breakfast after her customary bath and prayers, thundering out 'Aniya [little brother] how could you give such reading material to the child?" He was horrified to find how neatly the 'child' had purloined his X- rated file!

He also meticulously kept press cuttings of news about anyone in the family. He was very proud and fond of his niece Ashwathi Thirunal Gouri Lakshmi Bayi who had done yeoman service to his beloved Shri Padmanabha Swamy temple with her in- depth research and her books on the temples of Kerala. During his last aaraat temple festival, he gave her his personal pooja idol of Shri Padmanabha Swamy to hold in her hands, a privilege given only to the Shankara Achaarya, Shri Ananda Mayi Ma and Uthradam Thirunal himself.

Uthradam Thirunal was brought up in the old school. No homework, which he hated doing, meant no horse riding, which he loved. In his own way he cared deeply not only for his family but for many who came into contact with him. He was tickled pink that Antonia Filmer, a famous British journalist produced a documentary film on him, of immense archival value as well. My great uncle had a special name for me 'Lakshman Singh', thanks to my obsession with Sikhism and 'Daku' for my abrasive nature. I used to write 'LSD' on all my books with great flourish. Given my non- sylphlike figure he later on amended it to 'Lumpy Stumpy Dumpy' as well, which my three brothers delighted in echoing. There is a skein of laughter that runs through all the strands of my memories of him. One cannot picture him sans his ever twinkling eyes.

On the 14th of January 2014, there is the Lakshadeepam, the festival of a hundred thousand lamps, in the Shri Padmanabha Swamy temple. A pair of twinkling eyes will not be there to add to the light. May be, it would not matter too much for a new radiance of his soul would have merged with Shri Padmanabhaswamy.

Lakshmi Bayi Nalapat is the grandniece of Marthanda Varma