It is perhaps the biggest campaign that has got a country-wide attention since Anna Hazare-led anti-corruption movement and the massive protests that erupted after the Delhi gang rape incident. 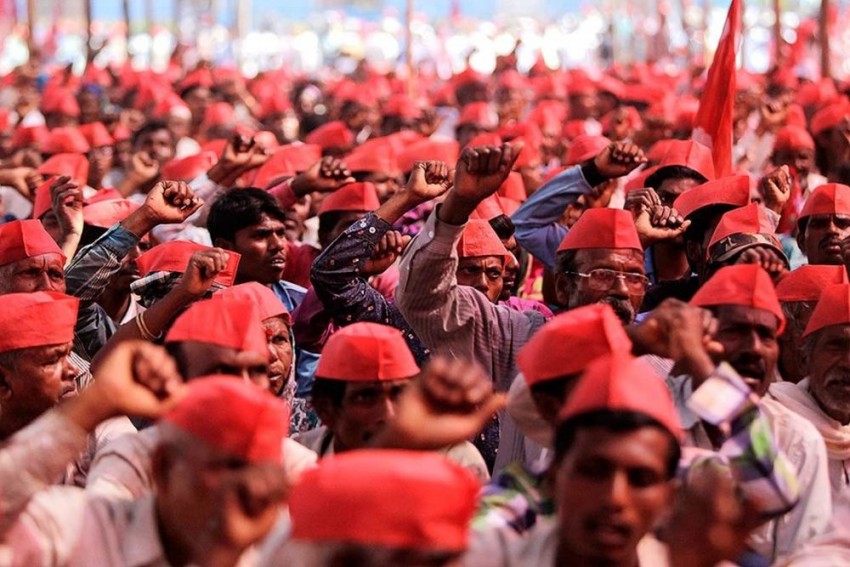 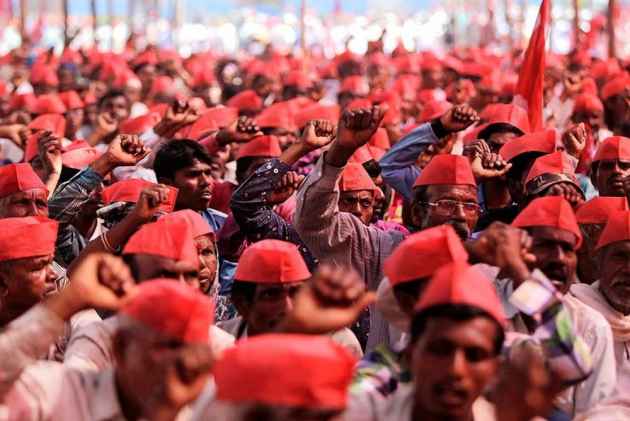 outlookindia.com
2018-03-12T20:47:02+05:30
On March 6, it was not a news for majority of the media organisations. When some of them carried it in inner pages, saying “farmers to begin march to Mumbai today,” it was seen as just another protest. However, the pictures that emerged thereafter were hard to ignore.
A video shot in bird’s eye angle that went viral on social media showed thousands of farmers descending from the hills. With red flags in their hands, they formed a red sea on the hairpin roads connecting Nashik and Mumbai. They were singing, dancing and marching forward. Their bloodstained feet and crying slippers didn’t stop them. As they walked, before each meal, a team of farmers broke off from the larger procession to find a clear ground and cook food (from resources collected largely by themselves) before the rest of the group arrives, according to reports. There were no large tents and farmers ate khichdi under the scorching sun. Musicians played traditional songs and the farmers danced, somehow still energetic despite their grueling journey. Some were quick to call it, “Dance of democracy”. Some said, “Democracy is on the move.”
Six days later, after walking 180 km from Nashik, the farmers, coming from all over the state of Maharashtra, entered the city of Mumbai at the crack of dawn on Monday. Marching over the JJ Flyover in the city, they gave the impression that a large army of foot soldiers were all set to take over the country’s finance capital. Mumbai was expecting a roadblock. But, surprisingly, the president of the All India Kisan Sabha, which organised this long march said: "We do not want to put SSC students (who are to appear for their exams) in any trouble. But we will reach (Mumbai’s) Azad Maidan. Therefore, we have decided to start walking past midnight."
It is perhaps the biggest campaign that has got a country-wide attention since Anna Hazare-led anti-corruption movement and the massive protests that erupted after the Delhi gang rape incident.
AIKS joint secretary and one of the organisers of the long march, Vijoo Krishnan, told Outlook that it took two months for them to mobilise farmers for this and to make arrangements for water, food and other facilities on the marching route.
“We have mobilised farmers in the past. But, this one seems to have touched people’s hearts positively. Even the mainstream media is giving coverage to us, besides the big support on social media,” he said. Krishnan has a reason to cite mainstream media coverage as a huge trade union march in Delhi just ahead of the Anna Hazare movement in 2011 was literally ignored by the mainstream media.
According to political observers, the farmers’ march has also given a fresh lease of life to the Left parties in India after their electoral setback in Tripura reduced them only to the state of Kerala. The march has come at a time when political commentators had reminded the Left parties that their future in India depends on social movements and actual striving on the ground. Aneesh Thillernkery, national convener of the Gandhian movement, Ekta Parishad, which has adopted foot marches as a successful form of campaigning, told Outlook that this form has its origin in the Gandhian movement. “March 12 also marks the 88th anniversary of Mahatma Gandhi’s dandi march (where Gandhi led a march from Sabarmati Ashram to Dandi covering 390 km to challenge the tax imposed by the British on salt production). “Walking is also a spiritual activity,” Thillenkery said.
Ekta Parishad led by Gandhian P.V Rajagopal had successfully led two long marches from Gwalior in 2007 and 2012 respectively. In 2007, thousands of farmers marched to the national capital from Gwalior demanding land for the landless, forcing the UPA government led by Manmohan Singh to set up a National Land Reforms Council headed by the PM. In 2007, the Parishad led another march from Gwalior. But, a bewildered central government sent the then union rural development minister Jairam Ramesh to sign an accord with the protesters and to persuade them to stop the march midway in Agra.
The AIKS march has been organised to denounce the BJP government in Maharashtra for betraying all its assurances given to the peasantry during the last two years on issues like farm loan waiver, remunerative prices, recommendations of the Swaminathan Commission and the implementation of the Forest Rights Act (FRA).
It also demanded complete change in the river linking scheme proposed to be started in Nashik, Thane and Palghar districts, so as to ensure that tribal villages are not submerged and water is made available to these districts and to other drought-prone districts in the state. It also opposed the acquisition of peasants' lands in the name of "fancy and elitist projects of the rulers" like the bullet train and super highways. It demanded temple lands and pasture lands be vested in the names of the tillers. It also sought increase in pension schemes to poor peasants and agricultural workers; compensation for great losses sustained by peasants due to pest attacks and hailstorms; and burning issues connected to the public distribution system (PDS).
When this story was last updated, the farmers, who got Maharashtra chief minister Devendra Fadnavis to hold a meeting between a delegation of farmers and political parties under his chairmanship at the Vidhan Bhawan, have successfully forced the government to accept the demands on the FRA and ration card. Minister for tribal development Vishnu Savra, who was part of the government delegation, said the FRA related issues will be sorted within six months. Later, Fadnavis said “all demands were met”.
Along with three ministers, the delegation of All India Kisan Sabha came to Azan Maidan to address the farmers in the evening, who were parked there from 5.30 am. Dr Ashok Dhawle and Dr Ajit Nawle explained the demands to the crowd even as senior leader Sitaram Yechury remained present on the dais. The march, however, also faced some sharp reactions from some quarters. Film maker Vivek Agnihotri dubbed it as red terror. “Red terror is coming to cities. The organisational and communication management all handled by #UrbanNaxals. Front organisations and media handling narrative. Dangerous times ahead leading upto 2019. Ignore it now, repent later,”  he tweeted.

BJP lawmaker Poonam Mahajan saw it as agenda-driven. "What has bothered me the most is these farmers holding communist flags. I hope it is not political. And in future, farmers should not be used for these political agendas," she said.
Undeterred by any of it, the farmers were determined to march ahead. One of them, Bhausaheb Gagode, from Dindori Taluka, Nashik, said: "We have only 2.5 acres land on which we grow crops like vaal, chawli and nagli. We have been tilling it for over 25-30 years and we applied for the transfer under Forest Rights Act in 2008 but nothing has happened. I have two children, wife, brother and parents to look after. I have completed BA but there are no jobs and our entire family is dependent on this plot, which we can till for only six months of the year. We want new ration cards to be issued, want the payment under Sanjay Gandhi Niradhar Yojana to increase to Rs 2000 from Rs 600 and not give our water to Gujarat."
Kusum manohar Waghmare, from Nalegaon village in Nashik district, said, "I left my ailing child at home to participate in this march. We don't have 7/12 in our name and we work for just Rs 150 per day. There is not enough to eat for my two children and we haven't been able to add their names to ration card, so that we can get more grain under BPL schemes."
For Shantabai Sampat Waghle, in her sixties, the long list of demands and rules and notifications may not mean much but for someone who has been tilling the forest land for the past 20 years she has been bearing the brunt of these policies and apathy for long. Which is why, she has walked from Nashik to protest along with thousands of other tribals who have tilling the land with no land to their name and other issues plaguing the farmer of Maharashtra.
My husband is very old and my house is in the forest. We have nine people in the family and not enough to eat. There is no irrigation and we have go to labour work where I get only Rs 100 per day. We have to save that to buy seeds and insecticide. How can this go on?, Shantabai asks.
“We have not only got the demands met but as we had said earlier we have a time bound commitment on most of them. And it is in writing,” said Dhawle. Some of the major demands were handing over the land that tribals had been tilling for long under the Forests Rights Act and sorting out the renewal of the ration cards to enable them to have access to the Public Distribution System. Apart from the demands concerning tribal famers, the agitation was also successful in getting a commitment on compensation for those affected by pink boll worm and hailstorms and loan waiver for all. Moreover, a committee to decide on the minimum support price for crops will also be formed to revise the prices before the monsoon session.
“Whatever could be achieved at this stage has been achieved and we will continue to strive for making every farmer loan free in the future,” said Ajit Nawle.
Even as the farmers were eager to get back home after being on foot for six days in the scorching sun, the announcement of additional trains and compartments may have just eased their pain a little bit, for now. And even as they will still wait for the time bound commitments to be honoured, having it in writing may have given them the strength to start preparing their pieces of land, one more time for the summer and then the erratic monsoon.
Earlier in the day, scores of other Mumbaikars were impressed by the gesture the farmers have shown by walking in the middle of the night on service roads to not cause any inconvenience to the class 10 board exam students. Maharashtra chief Minister Devendra Fadnavis on Monday lauded the protesting farmers for maintaining discipline during the protest in Mumbai.
Many NGOs and social workers from across religions have come forward to provide water and food to these farmers. The famed 'dabbawalas' of Mumbai and the city residents also came out to help the thousands of farmers.
On social media, people shared pictures of the bleeding legs of farmers and videos of senior citizens and women marching from Nashik to Mumbai. From actors to businessmen, Mumbaikars extended their support to the protesting farmers.
For in-depth, objective and more importantly balanced journalism, Click here to subscribe to Outlook Magazine

Mehbooba Throws Out The Architect Of PDP-BJP Alliance, Haseeb Drabu