He said the discrimination with different regions of Jammu and Kashmir over the past many decades was ended by the Modi government. 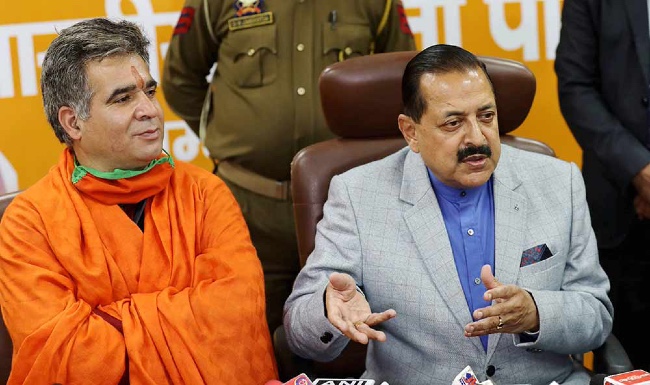 The people of the country have full faith in Prime Minister Narendra Modi's decisions, Union Minister Jitendra Singh asserted on Sunday and said the past critics of the BJP eagerly want to join the party to secure their political future.

"Those people who were teasing our party are waiting eagerly to pick up our party flag and those who do not get a chance are troubled…the leaders who were our critics in the past want to join us to secure their political future," Singh told reporters on the sidelines of a function in Kathua district.

He said after the Modi government took over the reins of the country, the decades long discrimination with different regions of Jammu and Kashmir was ended. "Those who are complaining today (about governance) are the same who remained in power for the past 40 or 50 years," Singh, who is minister of state in the Prime Minister’s Office, said.

Lauding the prime minister for his role in the fight against the COVID-19 pandemic, the minister said the way he led the nation of 135 crore people is acknowledged all over the world. "India announced a lockdown around March 2020 when people were raising questions about the need for such a move. Today, everyone recognises the wisdom of our prime minister which kept people safe from the infection," he said.

The Prime Minister Modi-led fight against COVID-19 put India in the league of major nations around the globe, Singh said. "People of the country have full faith in the decisions of their prime minister. He too has faith in the public," he said.

Singh also referred to the vaccination drive against COVID-19 and said the Modi government is taking every decision on scientific outlook and objective rationale.

"The country is exporting vaccines to other countries and has also overcome the earlier shortage of PPE kits. When vaccination was started in the country, the priority was given to health workers and (coronavirus) warriors," he said, adding that Modi himself took the vaccine later as per his age group.

Asked about his comment on senior Congress leader Ghulam Nabi Azad's remarks that the autocratic rule of the Maharajas was far better than that of the current government, Singh said the question here is whether he wants democracy or not.

On restoration of statehood to Jammu and Kashmir, the minister said Union Home Minister Amit Shah has repeatedly made it clear that statehood will be restored at an appropriate time and that he had nothing to add to the statement.