Persia To Perth: Pyarelal’s Qawwali Was A Spiritual Expression Of Love For God

Sufi music lost an old-world exponent in the death of the younger Wadali, who sang with his brother-guru Puranchand. A look at the scene vis-a-vis a famed pair of twins in 20th-century Carnatic: 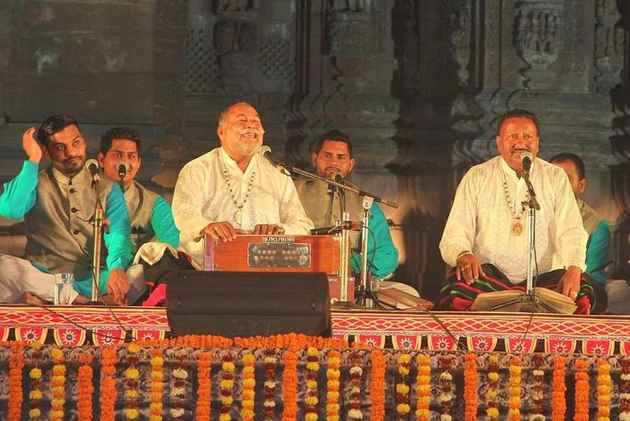 When the last rites of Pyarelal Wadali were held at his village in the country’s northwest plains, the sprawling wheat fields around the singer’s Amritsar stood a month short of harvest. In a way, that tended to symbolise an abrupt end to the Sufi-music siblings’ half-a-century’s artistic journey that many buffs thought had a few more years to go before wilting typically owing to old-age issues.

True, Pyarelal wasn’t young—he was 75—when the vocalist breathed his last yesterday (March 9) but the news of departure was largely unexpected. The famed duo, definitely latecomers, was active in the circuit when the younger among them suffered a cardiac arrest in the morning. For his family, the post-Holi Punjab air suddenly lost all its springy feel. Such was the shock his elder brother suffered that Puranchand Wadali retreated to his room in utter grief that lasted for hours together in contemplative silence.

It requires only basic empathy to imagine what it is for an artiste to lose his co-performer, kin and disciple—in one go. Younger-time Pyarelal was into playing the role of Krishna at the folksy raasleela traditional theatre shows when Puranchand, himself a delayed entrant into music after a quarter century’s stint as a village wrestler, chose to groom his brother in another arena of culture that has its roots also in West Asia.

For Sufi vocal in independent India, that meant a lot of service. Reason: that branch of music was one that the country had, after the 1947 Partition, lost in huge quantity and quality to a new neighbour along its west. In fact, the Wadali brothers’ own guru was someone Indian music almost missed for a while—before Bade Ghulam Ali Khan (born in Kasur, south of Lahore, which is now in Pakistan) himself decided to make Bombay his home from 1957 till his death eleven years later.

The celebrated Patiala gharana ustad was not Puranchand’s only guru. The brothers had learned music also from Pandit Durga Das of Amritsar, besides top proponents Ashiq Ali Khan and Machchan Khan. Not surprisingly, the Wadali music was devoid of gimmickry that had slipped into Sufiana Kalam during their peak of fame. By the turn of the millennium, they had openly expressed resentment over a trend of turning a “spiritual experience” like Sufi music into a cheap spectacle with colourfully dressed dancers around.

That would have anyway been antithetical to the duo, who had only in 1975 begun to sing outside their Wadali village that is also the birthplace of Guru Hargobind (1595-1644), the sixth nanak of the Sikh religion. That concert happened in Jallandhar, 80 km away from their native place—and, by default, in the Harballabh Mandir in that Doaba city. The two had actually gone there to perform at the prestigious sangeet sammelan (a festival annually held since 1875), but the tale goes that the Wadalis were disallowed (over their dressing that is said to have not suited the occasion), following which they gave a concert at another venue in the locality.

From, there they had been a pair who went on to win huge fanfare—within India and abroad. Indeed, by the mid-1990s, a couple of years after the Sangeet Natak Akademic graced them with an award, a Punjabi film featured one of their qawwalis (a seven-century-old genre, originally sung in the shrines built around graves of revered dervishes). Barely a decade later, in 2003, they made a more direct mark in the Hindi filmdom by rendering lyrics in the movie Pinjar that portrayed the pangs around India-Pakistan division. A sporadic string of trysts with the Bollywood was to follow—till 2011, by when they had worked for half-a-dozen flicks. The death of the Wadali brother comes a fortnight after Carnatic music, down the peninsula, observed the birth anniversary of a singer duo who were twins. Tamil Nadu’s B.V. Raman and B.V. Lakshmanan were born in Bhavani near Erode in 1921, but had moved to Bangalore for higher studies in the art as teenagers. They were 17 years when began learning vocal under S Sreenivasa Rao and a couple of other masters, Veena Krishnamachariar and Kulithalai Krishnaswamy Rao.

The brothers were significantly moulded by ‘Tiger’ Varadachariar (1876-1950) at Chidambaram that had a music college under Annamalai University. Their having later learned Kathakali music (under titan Venkitakrishna Bhagavatar of Mundaya in Kerala) added to their emotive strength while delivering Carnatic kacheris. It also helped them support the dance strides of Rukmini Devi Arundale (1904-86) in the theosophist-choreographer’s productions at Chennai’s Kalakshetra institution.

If the Wadali brothers generated frenzied atmospherics through their music, the Raman-Lakshmanan pair was restrained on the dais. Of the stage, both set of brothers led an earthy life marked by simple living—the essence of devotion that manifested in their art. Raman died in 2006 after a decade’s existence away from the world of concerts: Lakshmanan had died in 1996. Like the Wadalis, Raman-Lakshmanan bloomed late: they started singing together from the age of 35. Up in the Majha region, for Puranchand from now, life could be somewhat handicapped—be it as an artiste or just as the elder sibling of the late Pyarelal.