Perhaps the court thinks if the photos will reduce, so will the ads, resulting in savings. 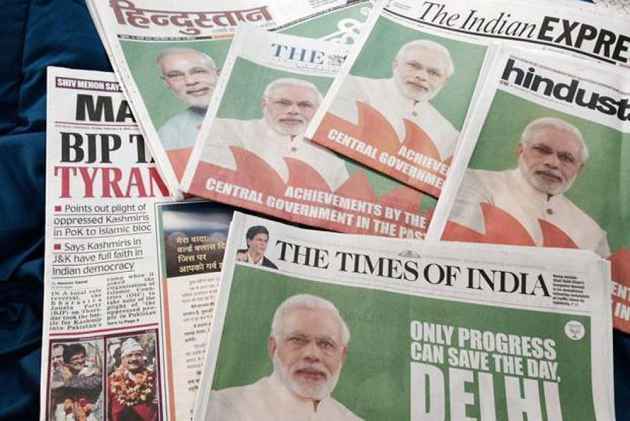 The Supreme Court has sent down a judgment which all political parties in India will hate. I personally do not agree with the decision, which I do not think was a matter of constitutional impropriety or of sufficient importance to be dealt with by the Supreme Court. But it is now with us.

The court has ordered that only three individuals may have their photographs on any advertisement paid for by the government. These are ads usually released by the Department of Audio-Visual Publicity (all Indian print journalists are familiar with the abbreviation 'DAVP'). The ads are released on subsidised rates, though by volume are important enough for all newspapers and TV stations to chase them aggressively.  They peak in the weeks before the elections, but are released through the year and their content constitutes things like announcements about inaugurations and foundation-stone laying and anniversaries and such things.

They are the single biggest way in which the governments of state and centre communicate achievements with constituents. Usually the largest component of the ad is the photographs which are placed at the apex or most important strategic position of the advertisement. The photos follow a hierarchy and the powerful get both premium positioning and larger size over others. In Union government ads it is the prime minister and the Cabinet minister whose department is releasing the ad who are highlighted, with deputy ministers and others getting small pictures which are consigned to the bottom.

In the ads released by the state governments it is the chief minister who is given pride of place. The textual material is usually poorly laid out, and that is because it is not as important as the photograph (though this could also be a function of the fact that the DAVP does not attract quality designers).

I say this because that is the exact format of the political advertisement at the local level also. In every neighbourhood of India, one finds billboards packed full of photographs, with little text. If they are authorised by a political party they will star some leader on top with the faces of his or her 'supporters' lined up below. If they are not authorised they will carry an outsized visual of the local man 'congratulating' state and national leaders. What is intended by this is association.

When I first went to the United States as a teenager I was struck by the local political ads, called yard signs, which were pure text ('Proxmire for Senate' or 'Kasten for Senate'). There were no photos and they seemed to be not needed. This may be the difference between a mostly literate society and a mostly illiterate one. Or, if one may speculate further, the doings of an idolatrous people for whom the visual — darshan — is critical.

So in the tens of thousands of ads released in India from now on, we will get to see the photographs of only three people. They are the president, the prime minister and, somewhat oddly since the judiciary does not release much or any publicity material, the chief justice of the Supreme Court.

Trickily, the court says that even these three "may themselves decide the question" of whether use of their photograph is appropriate. I say this is tricky because the prime minister loves having his photographs published and will now open himself up to political attack if his mug is overused. So why has the court banned the others' photographs? I am puzzled by this since the court has no problem with the ads themselves (other than duplicated ones, for examples many departments releasing ads for the same thing). So it seems to be an objection on either aesthetic or moral grounds, in my opinion.

Perhaps the court understands the broad psychology of Indians and thinks that if the photos are banned, the ads themselves will reduce and so result in savings. Whatever the reason, political parties will not like the order. It cuts at the single most important messaging too they have available to them, and it will be interesting to see how our leaders, who are quite ingenious and know much more than most of us, will work their way around this hurdle.