The tourist traps at Chatta Chowk in Red Fort The most surreal conversation I’ve ever had, I think, was with a shopkeeper at Chatta Chowk, the arcaded street lined with shops just as you enter Red Fort. He was lying down inside his shop, business was low, an assistant was keeping guard outside, by whose occasional yelling you could tell the passing of foreigners. Good Day. Sir. Madam. Handicrafts? Jewellery? Sandalwood?

I started speaking to him in Hindi. He closed his eyes, and answered my questions in staccato English, performed as if on stage.

"It is a hundred years old. I have been here for 35 years. Previously I am doing business of ivory. The ivory is banned by government. We start sandalwood business. All made by hand."

"Who do you get more business from? Indians or foreign tourists?" 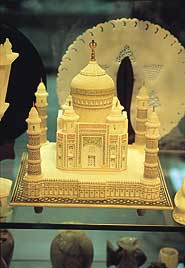 "Some people are doing 100 per cent Europeans. Others are doing only Indians. We are doing business with the Europeans and the NRIs and the diplomats. We are selling sandalwood, white wood, ebony wood, miniature paintings on paper and silk."

"Indians are having different tastes. They are buying mostly souvenirs for family members."

"Do foreigners bargain a lot?"

"Yes, they do heavy bargaining."

"So how much do you reduce?"

"I’m not doing heavy bargaining. I give some discount to my customers but don’t reduce beyond a certain limit. So I have a fixed price."

I thank him, and he goes to sleep again. Outside, I look at his assistant, who is sitting next to imitations of Mughal miniatures, which look horribly tacky to my untrained eye.

"How much for these?"

He says this in a singsong accent pitched somewhere between the American, the French, the British and the Japanese, trying to please them all at once. The Delhi hustler accent.

The Chatta Chowk is the first and the last great tourist trap of Delhi. It came up a century ago, with Curzon’s renovation of the Red Fort, reviving the Mughal bazaar that used to inhabit the place. And it has stayed, outlasting all the other poseurs around other monuments. Not that there are many. The Qutub Minar has one stall selling guide books, mineral water and camera film, and a few pesky guidebook sellers. Humayun’s Tomb, post renovation, has nothing. Neither now does the Purana Qila. And the vibrant markets outside the Jama Masjid are meant for another sort of tourism— from small town India. There are prayer caps, plastic Quranic inscriptions, posters of Mecca, and such like.

So the Chatta Chowk is the last of the rock stars. I walk into a shop and ask for a pair of wooden puppets.
"600 rupees."

"Tell me the desi price."