"PM in his speeches didn't question, nor meant to question the commitment to this nation of either former PM Manmohan Singh or Former VP Hamid Ansari, any such perception is erroneous, we hold these leaders in high esteem, as well as their commitment to India." 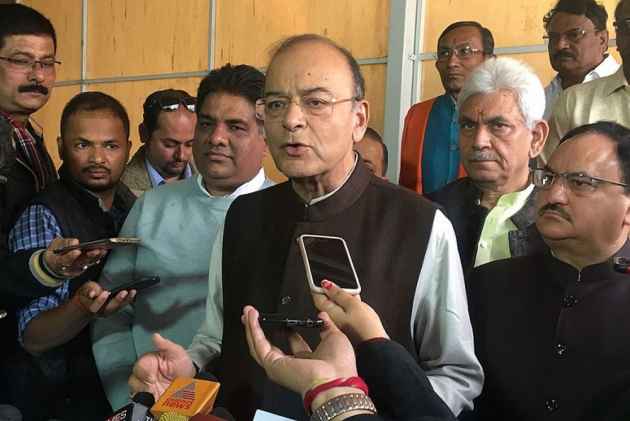 Union Finance Minister Arun Jaitley today said Prime Minister Narendra Modi did not mean to question the commitment of former Prime Minister Manmohan Singh and former Vice President Hamid Ansari to the country, and that the BJP holds them in high esteem.

The winter session of Parliament, had seen daily adjournments and uproar by the opposition demanding an apology by the Prime Minister for insinuating that former PM Manmohan Singh colluded with Pakistan to sway the results of the Gujarat Asseembly Elections to the Congress' side.

Addressing an election rally in Palanpur, Gujarat, earlier this month, Modi suggested that Pakistan was trying to influence the assembly polls in the state. He claimed that some Pakistani officials and Manmohan Singh met at Congress leader Mani Shankar Aiyar's house over dinner on December 6.

Singh has rejected the charge as "innuendos and falsehoods", and added he was deeply pained by the prime minister's "ill thought transgression".

The Congress had repeatedly sought a clarification of the remarks, and an apology by the PM.

"PM in his speeches didn't question, nor meant to question the commitment to this nation of either former PM Manmohan Singh or Former VP Hamid Ansari, any such perception is erroneous, we hold these leaders in high esteem, as well as their commitment to India," Jaitley said today in the Parliament.

He had earlier lambasted the Congress for seeking an apology, saying the Prime Minister will not apologise for Congress' 'misadventure'.

The Congress has thanked the minister for the clarification, also disassociating itself from any remark made any party member that may have hurt the dignity of the PM.

"Thank leader of the house for clarification on what has been issue of contention. I,on behalf of my party, say that we disassociate from any comments made by any member during elections that may have hurt PM's dignity,also we don't want any such thing to be said in future,"  leader of opposition in Rajya Sabha Ghulam Nabi Azad said.

Ahead of the Gujarat polls, senior Congress leader Mani Shankar Aiyar was suspended from the party's primary membership for calling the PM a 'neech insaan' (derogatory human).

The BJP had then called Aiyar's suspension "strategic".

Aiyar had on Thursday called the PM a neech aadmi (deplorable man) in response to the PM's speech at the inauguration of Ambedkar International Centre where he took a dig at Rahul Gandhi's comment on being a Shiva devotee and said some parties talked more of Baba Bhole (Lord Shiva) than Babasaheb.