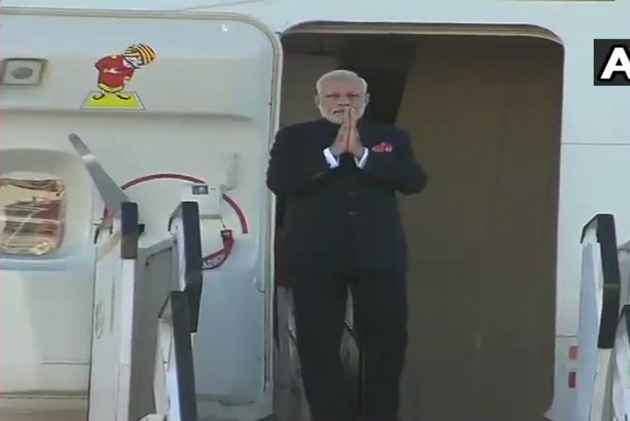 Prime Minister Narendra Modi was today accorded a warm welcome as he arrived here on a three-day visit to attend the BRICS Summit hosted by South Africa.

He will participate in the BRICS Summit, whose theme this year is 'BRICS in Africa'.

"Good evening South Africa! PM Narendra Modi arrives at the Waterkloof air base to a warm welcome. PM will attend the 10th BRICS Summit and related meetings in Johannesburg and several bilateral meetings on the sidelines," External Affairs Ministry Spokesperson Raveesh Kumar said in a tweet.

"After successful bilateral visits to Rwanda and Uganda, PM Narendra Modi landed in South Africa to take part in the BRICS Summit," Office of the Prime Minister tweeted.

Modi will attend the 10th edition of the BRICS Summit in Johannesburg, during which the grouping's leaders are expected to deliberate on global hot-spot issues, international peace and security, global governance and trade issues among others.

He is also expected to meet several leaders including Chinese President Xi Jinping.

Earlier, Modi had visited Rwanda for two days on the first leg of his visit.

BRICS is a grouping of five major emerging economies: Brazil, Russia, India, China and South Africa. Originally the first four were grouped as "BRIC", before the induction of South Africa in 2010.

India's relations with South Africa date back several centuries. India was at the forefront of the international community in its support to the anti-apartheid movement.

This year marks 25 years since the resumption of India's diplomatic relations with South Africa in 1993. This year also marks the 125th year of the Pietermaritzburg railway station 'incident' involving Mahatma Gandhi.

The South African Indian-origin community numbers around 1.5 million and constitutes about 3 per cent of South Africa's total population.