Modi used the occasion to speak against people who litter and said those who do so have no right to say ‘Vande Mataram’. The crowd intermittently shouted 'Vande Mataram' as the prime minister spoke. 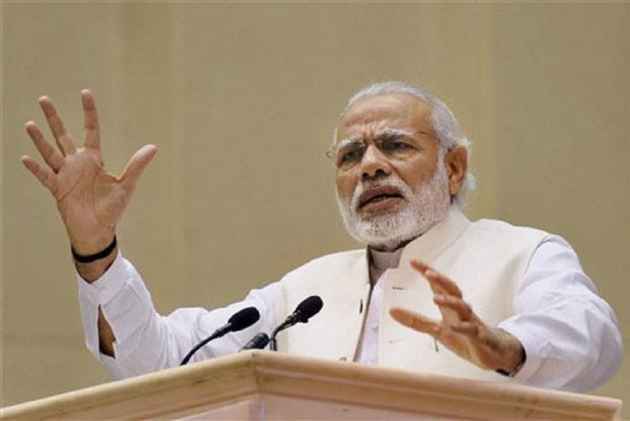 Prime Minister Narendra Modi on Monday batted for innovation and promoting skills among the youth and asked them to work for a modern India.

The world evaluates the country where it is today not what it was 5,000 years ago or during the times of Lord Rama or Buddha, the prime minister said at an event to mark the 125th anniversary of Swami Vivekananda's address at the World Parliament of Religions in Chicago.

Vivekananda supported experimentation and innovation and his government was working according to the ideals shown by him, Modi said.

The prime minister referred to Vivekananda’s address as 09/11 and also referred to the terror attack on the US on September 11, 2001. The devastating terror strike might not have happened if the significance of the other 09/11 had not been forgotten.

Vivekananda, the prime minister added, had given the message of love and brotherhood.

Modi used the occasion to speak against people who litter and said those who do so have no right to say ‘Vande Mataram’. The crowd intermittently shouted 'Vande Mataram' as the prime minister spoke.

Lauding sanitation and cleaning workers, he said they have the first right to say ‘Vande Mataram’.

The prime minister also asked colleges to hold cultural events to celebrate other states and added in a light-hearted vein that he was not against celebrating days like ‘rose day’. Students should do more, Modi said, asking them hold a Tamil day in a Haryana college or a Kerala day in  a Punjab college.

“There is no better place for creativity and innovation than university campuses… There is no life without creativity. Let our creativity also strengthen our nation & fulfil the aspirations of our people,” he said.

India’s standing in the world had risen, he said, crediting ‘janshakti’ (people’s power) for this.