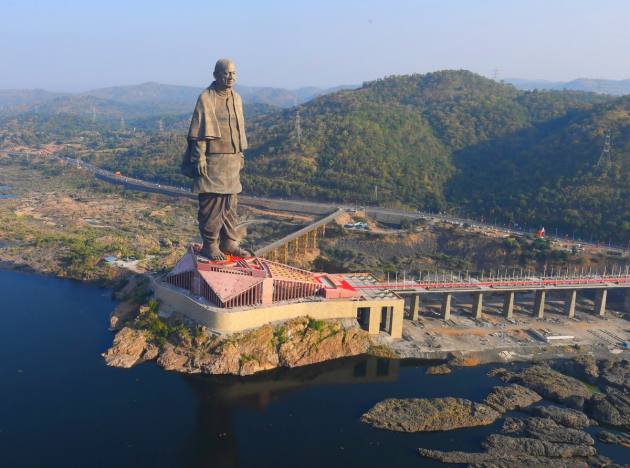 Prime Minister Narendra Modi on Wednesday dedicated to the nation a 182-metre statue of Sardar Vallabhbhai Patel, believed to be the tallest in the world, and said it will be a reminder about the courage of a man who thwarted efforts to disintegrate India.

Built on Sadhu Bet Island on Narmada river, the imposing statue is touted to be the world's tallest.

It is almost 29 metres taller than China's Spring Temple Buddha that stands at 153 metres, and almost twice as high as the 93-metre Statue of Liberty in New York.

Had Sardar Patel not united the country, we would need visas to see lions or pay homage at Somnath or view the Charminar in Hyderabad, the prime minister said.

He added that the statue will remind those who question India's existence that this nation was, is and will remain eternal.

He described the Statue of Unity as a symbol of the country's engineering and technical capabilities.

The imposing monument is twice the height of the Statue of Liberty in the US and is built on an islet, Sadhu Bet, near the Sardar Sarovar Dam in Gujarat's Narmada district.

It has been built using over 70,000 tonnes of cement, 18,500 tonnes of reinforcement steel, 6,000 tonnes of structural steel and 1,700 metric tonnes of bronze, which was used for the outer cladding of the structure.

A viewing gallery has been created at a height of 135 metres inside the statue to enable tourists to have a view of the dam and nearby mountain ranges.