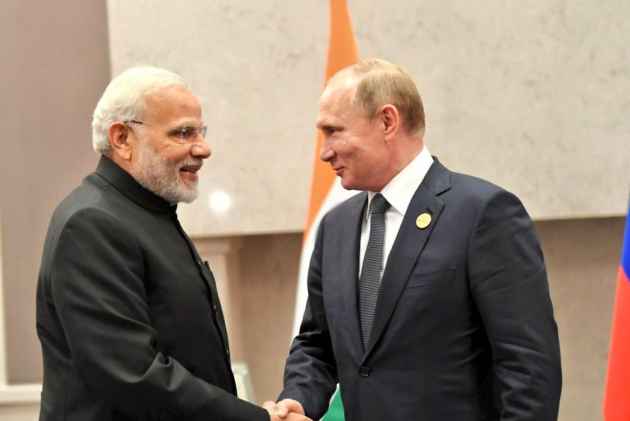 He held bilateral talks with President Vladimir Putin on the sidelines of the BRICS Summit in Johannesburg, and said the friendship between India and Russia is deep-rooted.

Never too late! Last bilateral meeting of the day, between PM @narendramodi & Russian President Putin got over at midnight local time. Both leaders had a comprehensive discussion on bilateral issues of mutual interest, specially in trade & investment, energy, defence and tourism. pic.twitter.com/mgnJpKT1Nx


Modi was meeting Putin after their informal meeting in May in the Black Sea coastal city of Sochi in Russia in May.

The two leaders then met on the sidelines of the Shanghai Cooperation Organisation Summit in Qingdao, China, in June.

Modi also met Chinese President Xi Jinping and the two leaders, who are meeting for the third time in less than four months, held talks to further friendship between India and China.

Taking forward the spirit of cooperation following Summit meetings in Wuhan and Qingdao, PM @narendramodi had a substantive meeting with Chinese President Xi Jinping in Johannesburg on the sidelines of #BRICS Summit. Discussed steps to further build trust & cooperation. pic.twitter.com/S8JlIqpy1w

India's PM also met South African President Cyril Ramaphosa and the two leaders discussed ways to expand the bilateral ties in a number of sectors, including trade and investment, IT and defence.


Following the delegation-level talks between Modi and Ramaphosa, three MoUs were signed on cooperation in exploration and use of outer space for peaceful purposes, setting up of Gandhi-Mandela Centre of specialisation for artisan skills and agricultural research and education.

Modi arrived in Johannesburg on Wednesday to attend the two-day BRICS Summit. The theme of the summit is 'BRICS in Africa'.

PM @narendramodi had a good meeting with the President of #Argentina Mauricio Macri on the sidelines of the #BRICS Summit. Discussed enhancing cooperation in trade and investment, agriculture and food processing and pharma. pic.twitter.com/W9j26qbRIF


BRICS is a grouping of emerging nations formed in 2009 and comprises five countries - Brazil, Russia, India, China and South Africa. Representing over 40 per cent of the world's population, the block's growth rates surpass those of the developed countries of the G7.

"Prime Minister said what we need today's is reformed multilateralism. He stressed on the importance of UNSC reforms," the MEA official said.