One thing that a wide cross section of Australians are not remotely worried about are the allegations by Salman Khurshid about Modi bringing his own cheerleaders with him on his foreign trips. 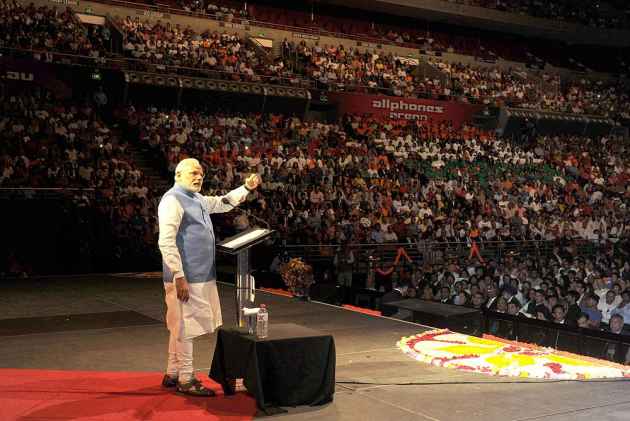 PM Modi of Pollie-wood has been such a success on his trip to Australia that an increasing number of Australians on the streets have been asking whether the Prime Ministership in Canberra cannot be outsourced to the PMO in the South Block.

These comments started in Brisbane when Modi was noticed to have 'great wrist action' while unveiling a statue of Gandhi at South Bank. Despite Abbott’s camp trying to make light of the situation with comments such as, "But Modi comes from a nation of statue worshippers", the whispers were not silenced.

They were also heard at the Allphones Arena where, reportedly, extra cleaning staff, who knew Gujarati, were brought in shortly before Modi 2014 began. This was, presumably, to make sure that no one accidentally erased any inspirational messages left by Modi while he waited it out in the green room. Earlier, at the Queensland University of Technology (QUT) in Brisbane, federal minister for agriculture, Barnaby Joyce, had displayed cultural insensitivity for Modi’s native script, remarking that the cleaners might think it was graffiti and clean up a long message Modi wrote with a marker on a prototype robot.  In Joyce’s defence, though, he has long been a victim of 'foot in mouth' disease. The emcees Rashi Kapoor, who is currently not Miss India Australia, and Siddharth Trivedi turned the crowd off with their shrill fangirl gushing and heavy handed swag respectively, making sure that Modi’s Madison Garden gig won, at least in the better emceeing category.

More people have since openly asked for Abbott’s job to be moved offshore, after it was found that he failed to acknowledge the traditional Kamberri landowners of the land in Canberra. Cameron, Xi and Modi made no such faux pas before their speeches. It was also noted that he had backed away from his threat to shirtfront Russia’s Vlad ‘the shirtless’ Putin over Flight MH17. He now says he has every belief that the Russians would do the right thing by the relatives of the Malaysian Airlines crash victims. Despite ample opportunities arising from Brisbane’s heat wave conditions, Abbott did not even attempt flicking Putin with a towel in the pool.

[Modi did take a crack, though: "(As) the third head of the government you are listening to this week, I do not know how you are doing this," he told members of parliament, "Maybe this is Prime Minister Abbott's way of shirtfronting you!"]

While on the topic of climate change appropriate clothing, many of the world’s leaders appeared uncomfortable and stiff in their suits. Modi appears to be relaxed in his cotton clothes and trademark jackets in unconventional colours such as blue, yellow and red. It was noted that various Australian officials on the stage at Olympic Park in Sydney were behaving like utter groupies and taking photos of him for social media. Where other G20 leaders were content with handshakes, Modi greeted Abbott with a hug, described locally as 'exuberant'. When asked later why he did not return the hug, Abbott immediately denied that his Liberal fear of all new things had anything to do with it.

One thing that a wide cross section of Australians are not remotely worried about are the allegations by Congress Party stalwart Salman Khurshid about Modi bringing his own cheerleaders with him on his foreign trips. After this information was passed around, the initial response consisted of nudges and winks of approval, followed by queries about the whereabouts of the pompom carrying Sheilas from the younger men. The older men mounted patrols and scanned the seas around Botany Bay, worried about the ever present risk of boat people. Once it was made clear that Modi’s cheer leaders rarely danced and that Mr Khurshid had based his math on the people that turned out to greet Modi in Nay Pyi Taw, a number of the old fellas began talking about the Japanese and the Burma Railway. Soon they were all yelling slogans against Shinzo Abe and had forgotten all about Modi and his mob.

For the Indian Australians, watching a Prime Minister visit their adopted land, talk of merging PIO and OCI cards or offering visas on arrival to Australian citizens are welcome. After years of seeing China dominate the market, they wish to see more trade. They are concerned at the recent local report that the Australia desk in the ministry of external affairs also looks after 25 other countries. They will be hoping that two-way trade can at least increase from $ 15 billion to the $ 40 billion that former Labor PM Gillard promised on her India junket. At least a few will want to know the secrets behind the rise of the Adanis in India, now that the group plans to build a $ 7 billion mine in Queensland with an SBI loan of $ 1 billion. Do all that Mr Modi, and we will ensure the Modi Express truly comes to Australia, bells, whistles and mango leaf garlands firmly in place.