PM Modi Should Not Walk On Manusmriti's Path, Must Speak On Dalit Targeting, Says Jignesh Mevani

"On January 9, I will hold Constitution in one hand and Manu Smiriti in other hand and would like to ask Prime Minister Modi whether this county would run on Constitution or Manusmriti," he said 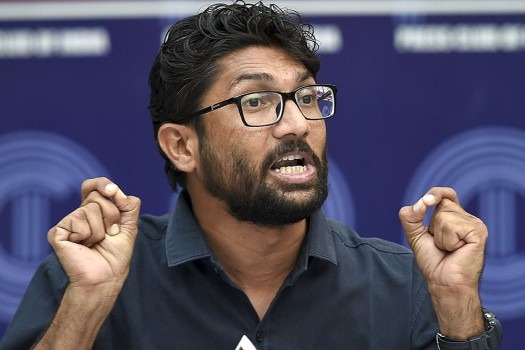 Talking to ANI here, Mevani said, "After incidents of Una, Saharanpur, Rohith Vemula episode or Bhima Koregaon violence; time has come when Prime Minister Narendra Modi should open his mouth. Social justice must be ensured in this country and targeting of dalits should be stopped."

He also said Prime Minister Modi should not walk on the path of Manusmriti.

"Everybody in this country must rise above caste and religion and become a human. The country's prime minster should also understand this and it is expected of him to talk about constitutional values and should not walk on the path of Manusmriti," the dalit leader said.

He added that he would ask Prime Minister Modi to choose between Manusmriti and Constitution at a rally in the national capital on January 9.

"On January 9, I will hold Constitution in one hand and Manu Smiriti in other hand and would like to ask Prime Minister Modi whether this county would run on Constitution or Manusmriti," Mevani said.

He also termed registration of an F.I.R. against him in Pune for delivering inflammatory speech as a childish act of Rashtriya Swayamsevak Sangh (RSS) and the Bharatiyia Janata Party (BJP).

"I didn't go to Bhima-Koregaon, didn't deliver inflammatory speech. Even I didn't participate in Bandh call. Despite this, a childish attempt to tarnish my image by lodging F.I.R. against me won't yield any results," Mevani said.

He added, "Jignesh Mevani is going to prove costly to them (RSS and BJP) in 2019 that is why they are targeting me. But, we will continue to fight within the ambit of Constitution and law."

An F.I.R. was registered against Mevani and Jawaharlal Nehru University (JNU) student leader Umar Khalid in Pune on Thursday under sections 153(A), 505 and 117 of the Indian Penal Code (IPC).

The F.I.R. was registered after two complainants -- Akshay Bikkad and Anand Dhond - approached police and alleged Mevani and Khalid had made "provocative" comments at an event on December 31 at an event organised to commemorate the 200th anniversary of the battle of Bhima-Koregaon.

Bhima-Koregaon violence in which a person was killed has led to protests on streets and in Parliament.

The dalit community is up in the arms over the incident. However, the Maharashtra government has denied any dalit was killed in Bhima-Koregaon where clashes broke out between two groups on Monday during an event to mark 200 years of Bhima Koregaon battle near Pune.