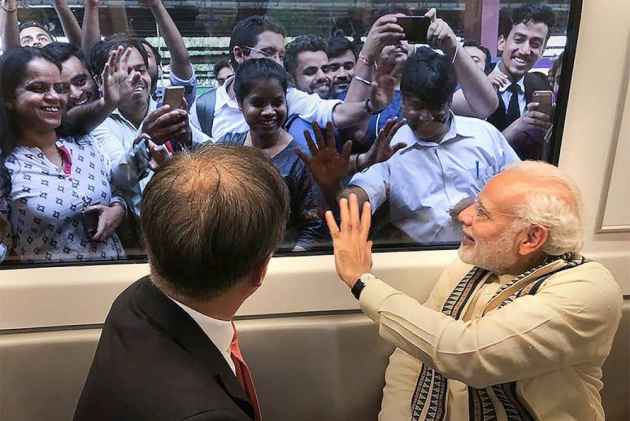 Prime Minister Narendra Modi and South Korean President Moon Jae-in took a ride in the Metro to Noida on Monday.

The prime minister's office (PMO) tweeted a picture of the two leaders travelling on the Delhi Metro.

On board the world-class Delhi Metro with President Moon Jae-in. We are headed to Noida...do not miss the iconic Akshardham Temple in the background! @moonriver365 pic.twitter.com/g0J40lRb7t

Another picture tweeted by the PMO showed them at the Yamuna Bank metro station.

A DMRC spokesman said they leaders boarded a Metro train at Mandi House Metro station at around 4:36 pm and travelled up to Botanical Garden station on the Blue Line, leaving the station at 5:02 pm.

They travelled with tokens in a normal train with passengers and there was no delay in services on the Blue Line due to their movement, the spokesperson added.