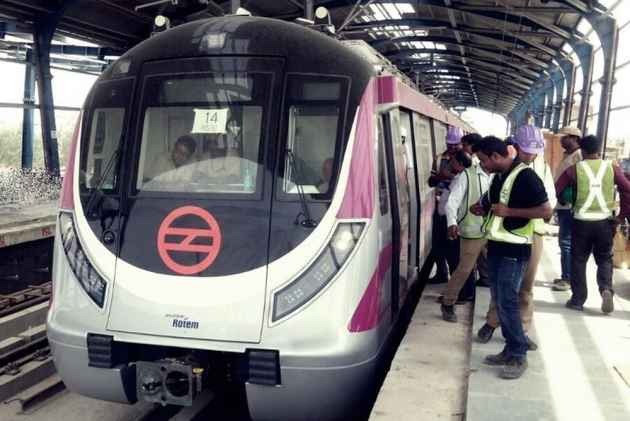 The prime minister boarded the metro at Botanical Garden, which is the terminal station of the Magenta Line, at 1.05 pm, and alighted at the Okhla Birds Sanctuary following a four- minute ride. Both stations fall in Noida, a suburban town in Uttar Pradesh bordering New Delhi.

The other end of the line, for now, will be south Delhi's Kalkaji Mandir. However, by April, the entire corridor, stretching till Janakpuri West, is scheduled to be functional.

From the metro station, Modi proceeded to sector 125 rally ground at Amity University where he will address a public rally.

Senior AAP leader Ashutosh, in a series of tweets on Sunday, said that it was “narrow minded” of the Prime Minister to discriminate against an elected Chief Minister of Delhi, reported The Hindu.

The coaches will reportedly have LED display, power charging capacity and colourful seats, while the stations will portray themes of nature, yoga, and cultural landmarks. Further, driverless trains are to be introduced along with the Communication Based Train Control (CBTC) signalling technology, which facilitate the movement of trains within a frequency of 90 to 100 seconds.

The Magenta Line also marks the usage of the first platform screen doors (PSDs), which are glass-made screens installed near the edge of platforms that open only when a train arrives and shut after it departs.

On a related note, a driverless metro train on Tuesday rammed into a nearby boundary wall during a trial run, due to alleged negligence by the maintenance officials.

The accident, which occurred at the Kalindi Kunj Metro depot along the Magenta Line, reportedly happened when the train was being moved from the workshop without testing the brake system. As a result, when the train was moved up the ramp for washing, it rolled back and hit the adjacent boundary wall.

However, no casualties were reported.