The PM's road show commenced from the Nizamuddin Bridge, the start of the about 9 km first leg of the Delhi-Meerut Expressway. 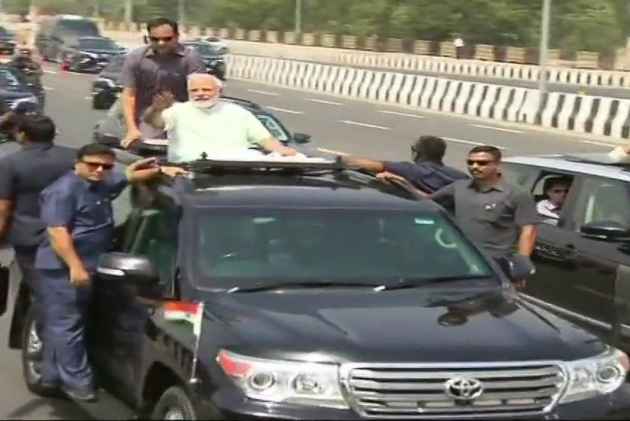 Prime Minister Narendra Modi traveled in an open jeep on the Delhi-Meerut Expressway on Sunday and also inaugurated India's first smart and green highway, the Eastern Peripheral Expressway (EPE), built at a cost of Rs 11,000 crore.

Modi also inaugurated the first phase of the Rs 7,500-crore Delhi-Meerut Expressway that will reduce the travel time considerably.

The Prime Minister's road show commenced from the Nizamuddin Bridge, the start of the about 9 km first leg of the Delhi-Meerut Expressway, and after a 6-km travel on the stretch, he then flew to Baghpat for dedicating the EPE to the nation.

Road transport and shipping minister Nitin Gadkari too rode in a separate open car alongside Modi.

The first phase of the Delhi-Meerut Expressway costed Rs 842 crore on building the 9-km stretch of 14-lane highway, according to an advertisement released by the government on the project.

The 135-km EPE, built at a cost of Rs 11,000 crore, has several unique features and is India's first highway to be lit by solar power besides provisions of rain water harvesting on every 500 metres on both sides and would showcase 36 national monuments and 40 fountains, the minister said, adding it has been completed in a record 500 days.

There are 8 solar power plants on this expressway having a capacity of 4000-kilo watt (4 MW).

The state-of-the-art road will have auto challans for over-speeding, as cameras will capture speed of vehicles, besides it will have provisions of tolling only for the distance travelled, the minister said adding, the expressway has an iconic toll plaza at the entry point on Kundli side besides digital art gallery.

The minister said it is equipped with smart and intelligent highway traffic management system (HTMS) and video incident detection system (VIDS) and will set a benchmark in highway construction by being environment-friendly with world-class safety features and smart/interactive infrastructure.

The foundation stone of the greenfield project was laid by Prime Minister Narendra Modi on November 5, 2015.

Gadkari said 2.5 lakh trees have been planted here including transplant of 8-10 year old trees and drip irrigation provision has been done.

A lot of traffic, outbound or non-destined for Delhi will be diverted, he said adding at least 50,000 vehicles going to Jammu and Kashmir, Punjab, Haryana, Uttarakhand, Uttar Pradesh and Rajasthan will be diverted, bringing down vehicular pollution.

The fully access controlled six-lane expressway provides entry and exit designated interchanges only and has 406 structures of which 4 are major bridges, 46 minor bridges, 3 flyovers, 7 inter-changes, 221 underpasses and 8 road over bridges (ROBs).

The project had earlier faced resistance from farmers over land and other issues which have since been solved by giving higher compensation.

The Supreme Court on May 10 had directed the NHAI to throw open the Eastern Peripheral Expressway for the public by May 31, asking why were they "waiting" for its inauguration by the Prime Minister.

The apex court had said if the 135-km expressway, which envisages signal-free connectivity between Ghaziabad, Faridabad, Gautam Budh Nagar (Greater Noida) and Palwal, is not inaugurated on or before May 31, it should be thrown open for public who were facing traffic congestion in Delhi.

The Eastern and the Western Peripheral Expressways were planned in 2006 following the apex court's order to build a ring road outside the national capital for channelling the traffic not bound for Delhi.

About the Delhi-Meerut Expressway, the minister said the project, built at a cost of Rs 841 crore has vertical gardens with solar system on the Yamuna Bridge on this expressway.

This is the first bridge in the country/world that have vertical gardens with solar power system and drip irrigation. Beautiful lighting system has also been developed on the major structures, he said.

The minister said a cycle track of 2.5 metre wide has also been constructed on both the sides of this expressway, which also has provision of 1.5 metre footpath on each side for pedestrians.

The first package of the Delhi-Meerut Expressway will provide a major relief to the commuters in Delhi-Noida and starts from Nizamuddin Bridge to UP Border having a 6 lane Expressway & 4+4 lane Highway.

The minister said that on completion of the entire expressway the time to travel from Delhi to Meerut will reduce to 45 minutes from the present about 4-5 hours.

The scheduled time period for the construction of this project was 30 months whereas the project has been completed in 17 months, he said.