Karnataka: CM Siddaramaiah Slams BJP Over PNB Fraud, Says 'You Are Practising Goondagiri In The Country' 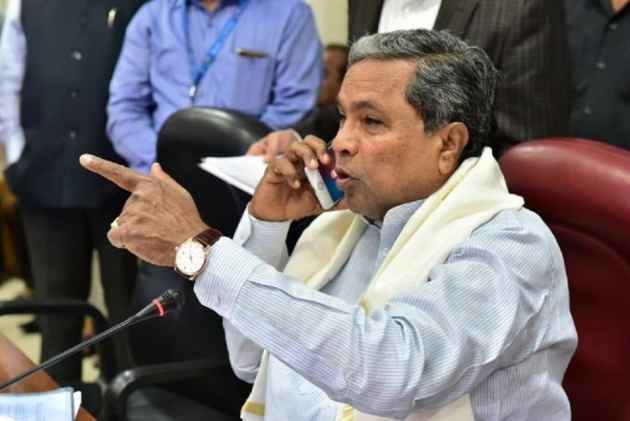 Amid heated exchanges with BJP members, Chief Minister Siddaramaiah asserted that Congress would retain the treasury benches in the next assembly and called Prime Minister Narendra Modi "the facilitator of corruption in the country."

Trouble arose in the otherwise smooth proceedings when senior Congress member K N Rajanna mentioned about the Nirav Modi issue while intervening during the Chief Minister's reply to the discussion on the state budget for 2018-19.

Rajanna,while referring to farm loan waivers in BJP-ruled Uttar Pradesh and Maharashtra, spoke of loans given to Nirav Modi and liquor baron Vijay Mallya, "who are now absconding."

BJP took strong abjection to it and accused the MLA of attempting to divert the issue.

BJP MLAs alleged that it was during UPA rule that loans were given to Nirav Modi and Mallya, while Congress too levelled similar charges against the NDA government and the Prime Minister,resulting in a war of words between both sides.

Despite BJP's objections, as Rajanna tried to continue with his intervention by mentioning the names of Nirav Modi and Mallya, opposition leaders Jagadish Shettar requested the Chair to restrain him from speaking and direct the Chief Minister to continue with his reply.

"Is Congress incapable in Parliament of raising the issue? What is Mallikarjuna Kharge (Congress leader in the Lok Sabha) doing?" Shettar asked.

BJP members then trooped into the well of the House,  shouting slogans like "goondagiri government".

Amidst the sloganeering, the Chief Minister tried to  convince BJP members, stating that Rajanna as an MLA also has the right to speak and raise issues in the House.

As BJP continued the protest, he termed them "shameless" and alleged that the opposition with "malicious intent" did not want him to reply on the budget.

Deputy Speaker Shivashankar Reddy then adjourned the house for about 10 minutes.

When it resumed,BJP members continued protesting from the well, with Shettar accusing the government of playing politics and not being interested in addressing issues of the state.

Hitting back, Siddaramaiah said the BJP's protest was not right and was against the parliamentary system.

"You are practising goondagiri. "As this is the last day of the last session, I'm quiet or else I would have got you expelled. I would have seen to it that you are put outside. You should be ashamed of your conduct," he told BJP members.

Even as the BJP protest and sloganeering were on, the Chief Minister continued his speech, during which he claimed credit for announcing farm loan waiver and hit out at the Modi government for not coming to the rescue of farmers.

He also claimed that his government has maintained fiscal responsibility 'very well' and shown fiscal prudence and that the economy of the state was stable.

BJP then shouted slogans that the Congress government "is number one in taking loans, corruption and suicides."

To this Siddaramaiah retorted that BJP was indulging in "goondagiri". "They indulged in corruption 90 per cent and they are the Gangotri of corruption", he alleged.

Holding the Prime Minister responsible for the Nirav Modi case and his 'absconding', he said "Modi (Narendra Modi) is the facilitator of corruption in this country."

After his reply,many bills, including vote on account and appropriation bills, were passed by voice vote amid the din.

Earlier, Siddaramaiah claimed that the public mood was in favour of Congress and they would again occupy the treasury benches, while BJP would continue in the opposition in the 15th assembly after election.

"I told this even to the Prime Minister after receiving him at Mysuru recently. I told him about Congress retaining power, to which he responded laughingly," he said.

Shettar said the Chief Minister was in an "illusion" about retaining power and asserted that the BJP would come to power.

He took exception to Siddaramaiah mentioning about his conversation with the Prime Minister as the latter was not present in the House to defend himself regarding the incident.