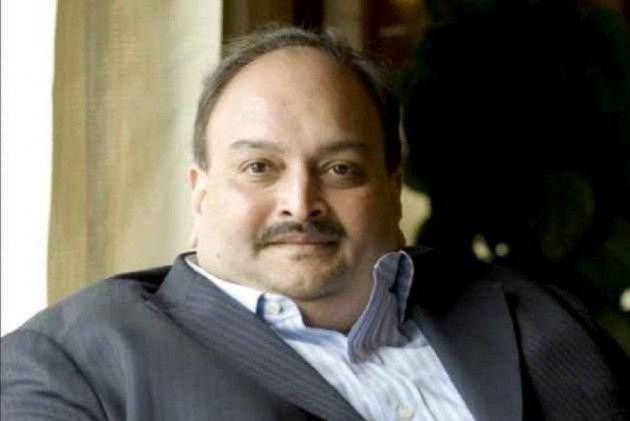 Gitanjali Gems chairman and managing director Mehul Choksi, co-accused in the Punjab National Bank (PNB) fraud, has said "exaggerated" allegations by multiple investigating agencies has left him "completely defenceless" and that he feared for his safety to return home.
In a two-page March 16-dated letter to the Central Bureau of Investigation (CBI), Choksi said: "I further inform that requiring me to join the investigation, though leaving me helpless and information less, by various actions taken by multiple agencies is unfair. The manner in which the allegations have been exaggerated has left me completely defenceless."
This is the second letter he has written to the CBI in less than 10 days.
In the March 7- dated letter, the jeweller said the seizure of his assets, bank accounts and the shutting down of all his offices in India has caused prejudice against him. He had also said it was not possible for him to travel back to India as his passport has been suspended. A Blue Corner notice was issued against diamond jeweller Mehul Choksi of Gitanjali Group and Nirav Modi in February.
In the last letter, Choksi further said he was unable to travel to India due to his persisting health condition, reported news agency IANS.
"I am extremely held up in my business abroad and am working hard to resolves the issues it is facing due to the unnecessary closure of the business in India due to untenable allegations. Further, I am unable to travel to India due to my persisting health condition," Choksi said.
He also denied he was a partner of Diamond R US, Stellar Diamond and Solar Exports.
He has also hit out at the media, alleging that it was blowing every issue out of proportion.
Clarifying that he was not making any excuse to travel to India, Choksi claimed that his passport is suspended.
"Regional Passport Office (RPO) has not communicated with me and my passport remains suspended. I have the deepest respect for your offices and assure you that I am not making any excuse, whatsoever to travel to India," he added.
"I reiterate that I am abroad and have earlier also responded to your notices. Surprisingly, the issues raised remain unaddressed, making my fear of safety rise to extreme levels. Media continues to conduct a trial by itself and blow every issue out of proportion," he stated.
Diamond tycoon Nirav Modi, his uncle Choksi and others are being investigated by multiple probe agencies after the scam recently came to light following a complaint by the PNB that they had allegedly cheated the nationalised bank of more Rs 12,000 crore, with the purported involvement of a few employees of the bank.
The CBI and the ED have registered FIRs to probe the case and intensified the crackdown on Modi and Choksi, with the ED seizing jewellery and assets worth thousands of crores of rupees, the I-T department attaching various properties and the CBI grilling several senior executives of his company.
The CBI has, so far, have arrested more than a dozen people, including former and current officials of PNB and companies related to Modi and Choksi, in connection with the case.
Recently, the CBI registered a fresh case against Modi. The action has been taken on a complaint by the bank on March 4, the police said.
The CBI has named Modi, then president (finance) of his  Firestar Diamonds International Limited Vipul Ambani, chief finance officer Ravi Gupta, other directors and officials of the company, and unidentified public servants of the bank.  This is the second CBI FIR in which Modi has been named.
The bank has alleged in its complaint that its Brady Road branch in Mumbai had extended credit facilities to Firestar group between 2013 and 2017.
(With ANI inputs)