“How difficult is it for the CID to track the buyer who had called my son on that day to meet him? We all know everything we do online is saved somewhere,” says his father.

It has been more than seven months since Kumar Ajitabh, a Bengaluru-based techie, went missing on his way to sell his car to a person he met on retail website OLX.  Ajitabh disappeared on December 18, 2017.

Ajitabh's family has been running from pillar to post, seeking an explanation for the sequence of events that led to the disappearance of the techie, who worked with the BT Group in Bellandur.

“These seven-and-a-half-months have been a nightmare for the whole family. Every day we wake up thinking we will receive some good news…but, every day has been disappointing for us,” Ajitabh’s father Ashok Kumar Sinha told Outlook on Thursday. On December 19, Ajitabh’s roommates informed the family that their son was missing.

“I remember the last time when we spoke on December 13, 2017, he was so happy. IIM (Indian Institute of Management) was his dream and he had just got selected to the Kolkata branch. He even asked me to arrange his marriage. I never thought that it will be the last time I would get to hear my son’s voice,” said Sinha, recounting his last conversation with his son.

“How difficult is it for the CID to track the buyer who had called my son on that day to meet him? We all know (that) everything that we do online is saved somewhere,” Ajitabh’s father added. 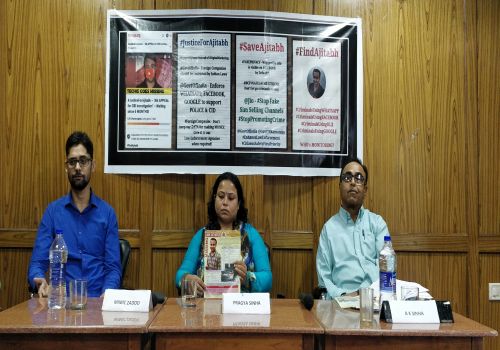 After searching everywhere, from his office to his friend’s places, from hospitals to police stations, the family, on December 20, 2017, got an FIR filed. The family even announced a reward of Rs. 10 lakh for anyone who provides information about Ajitabh. But nothing happened. Clueless and tired, on January 2, 2018, the father filed a writ petition in the Karnataka High Court for a CBI investigation.

“The police, the SIT and the CID, none of them have done anything so far. They have been harassing us since day one. Every now and then they call us to the mortuary to identify dead bodies. It’s humiliating for us,” Ajitabh’s sister, Pragya Sinha, told Outlook. “There was a time when the police forced us to say that one of the dead bodies that they were showing us was my brother’s body,” she added.

“We demand a CBI probe into the case. Only CBI can work without any limitations and can answer our questions as to what actually happened to my brother,” Pragya added. “Rakhi is coming and I am struggling to trace my missing brother…to hear his voice again.”

The family also alleges that the police never showed them the CCTV clips that were collected during the investigation. “We were never updated about anything regarding the case. It was us who gave information to them and sought justice,” says Ajitabh’s brother-in-law, Mimic Zadoo.

Why Ajitabh wanted to sell his car that he had bought a year back?

“To get admission into IIM for an executive MBA was my son’s dream. He was extremely happy with the admission letter, but the fee was around Rs. 25 lakhs and he was short of some amount. That is when he decided to sell off his car, never thinking this could change his life. I even offered him some money but he said he wanted to use his own money,” the distraught father said. “I wish I had forced him to take money from me. Now we are ready for the worst but we want a proper investigation and for that the CBI should take up the case.”

“We have lost faith in CID. Neither the police nor the CID did anything. The family has suffered the loss, they are still seeking justice,” Ajitabh’s friend Dr.  Prashant Kumar told Outlook.

Ajitabh’s friends and family say that it could have been anyone from any part of the country, and the state apparatus’ failure to find him so far brings to light the loopholes in the system. They blame the police’s laxity in swinging into action and several lapses in the initial investigation for their shaken trust in the administration.

The case in connection with Ajitabh's disappearance is currently being heard at the Karnataka High Court. The next hearing is scheduled for July 31.