The Frail, the Fearsome, and the Forthright

The frail, the fearsome and the forthright—three distinct personalities from the same political gene pool ranged against each other are set to influence voting and seat tally in the Saurashtra region of Gujarat which goes to the polls on Thursday.

If the serene, single frame of Dr Kanubhai Kalsariya, the man who stalled corporate major Nirma by forging the rural into a strong force is an example of innate strength, Narendra Modi’s in- the- face aggression stands up front while ageing patriarch Keshubhai Patel’s firm and forthright demeanour is set to rock politics in the region which will decide the fate of 52 of the total 182 legislators.

As things stand, Modi, the man who would be king, is a tiger trapped between an ageing patriarch, Patel, and the conscience keeper of the common kathiawadi, Kalsariya, as he wades through this lion country in the quest for a third term. The region’s ancient name was Kathiawar. Patel is contesting from Visavadar in this district and Kalsariya from Gariadhar in Bhavnagar district.

Interestingly all three come from saffron stock: Keshubhai Patel is the founder member of the Jan Sangh as well as the BJP in the state while Modi continues to be on loan service from the RSS and Dr Kalsariya is a three term MLA of the BJP.

Keshubhai is a respected elder with a clean reputation and an earthy grasp of politics. His community of  leuva Patels also treats him with veneration.

Dr Kanu Kalsariya remains a practicing doctor essentially cast in the mould of Jaiprakash Narayan whose simple life style and total dedication to suffering humanity makes him a cult figure in coastal Saurashtra. The Sarvodaya Trust headed by him runs charitable hospitals and the operations performed by him go into thousands.

Modi, a general secretary of the Gujarat BJP played a major role along with Shankersinh Vaghela in the BJP victory in the 1995 Assembly elections which led to the formation of the first party government in Gujarat, headed by Keshubhai Patel. The rebellion by Vaghela later the same year leading to the unseating of Patel is in hindsight seen as having been triggered by Modi for which he was banished from Gujarat and replaced by Sanjay Joshi. Patel’s return as chief minister after the Assembly elections and his subsequent removal and replacement by Modi widened the gulf between the two.

Modi’s strong personal streak and systematic sidelining of old guards within the party led to a rebellion within its ranks in the run up to the 2007 Assembly elections but old school Patel refused to lead the rebels and Modi crushed them with his aggression filled helmanship. Patel chose to walk into the sunset but circumstances, his community, and the increasingly alienated workers, who found a personality cult replacing the party, forced him to return. And he has done so with gusto to take on his one time junior. Patel counts in Saurashtra and his regional party is giving anxious moments to Modi who understands its common saffron heritage and vote dividing power that will harm him immensely.

Kanu Kalsariya stands out for very different reasons. A soft spoken do-gooder, very content serving the rural areas of Mahuva, Talaja, Gariadhar and Savarkundla in the environs of Bhavnagar-Amreli districts of Saurashtra region as a doctor in the best traditions of service epitomized by Jaiprakash Narayan and his sarvodaya movement. The BJP chose him and he defeated veteran congress leader and former chief minister Chhabildas Mehta at the hustings.

His championing of the people cause brought him in direct confrontation with corporate giant Nirma which wanted to set up a Rs 1400 crore cement plant in the region on land made available by the Modi government. Simply unmindful of who was facing him, Kalsariya took on both Nirma and the Modi government successfully. To challenge Modi in Gujarat is unthinkable and for a BJP legislator a disastrous preposition.

It goes to the credit of Modi as well as the public persona of both Patel and Kalsariya that the man who remorselessly tears into the trio of Mrs Sonia Gandhi, Rahul and Manmohan Singh in his campaign speeches has to date not uttered a single word against the two ex-saffronite elders. Neither has any BJP leader in Gujarat. Keshubhai quit on his own and Kalsariya merely did not renew his primary membership of the party. Patel’s party is contesting the bulk of the seats in the state while Kalsariya’s Sadbhavana Manch is contesting five seats in Saurashtra and one in Choriyasi constituency of Surat in south Gujarat.

The high point of chief minister Modi’s leadership remains the 127 seats the BJP bagged from the total 182 in the 2002 Assembly elections that followed the Godhra train carnage and the statewide communal riots thereafter. Saurashtra's contribution then was 37 of the total 52 seats accounted by the region. In the 2007 elections while the BJPs overall tally fell to 117, it gained one more seat in Saurashtra despite a rebellion of sorts in the party ranks in this region. This time both saffron sons are expected to cut into the BJP seat tally. The results will be interesting to watch this time over. 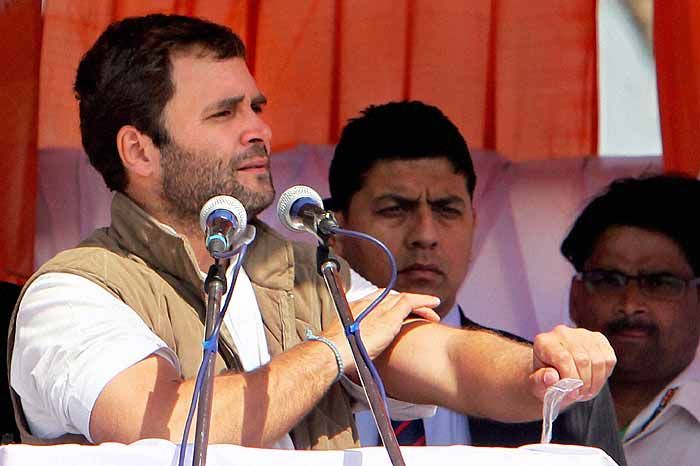 Rising temperatures of a dizzying poll campaign that saw Congress general secretary Rahul Gandhi taking on entrenched chief minister Narendra Modi was the highlight of the last day of campaigning in Gujarat on Tuesday for the first phase of elections to 87 seats of Saurashtra and south Gujarat slated for Thursday.

If Gandhi turned anecdotal story teller before lunging into his identified opponent—and there is only one— Modi sought to hit back in the only way he knows, through barbs, innuendos and satire laced comments designed to engage a local audience in their own language of comfort.

If Rahul addressed three public meetings, two in Saurashtra and one near Ahmedabad, the indefatigable Gujarat chief minister sought to ring his opponent with nine meetings, criss-crossing the poll-bound areas through the length of the day. Additionally, the BJP hurled a national leader with big stars to complement their chief minister’s efforts. If there were heavyweights like LK Advani, there were also stars like Vivek Oberoi , Swaroop Sampat Rawal and popular Gujarati singer actor duo Mahesh and Naresh Kanodia bringing up the rear.

If Gandhi charged Modi with self serving dreams that rarely incorporated the aspirations of the poor and the struggling middle class, Modi hit back pointing out that Congress ruling the country was a government mired in scams after scams and the state was not safe in their hands.

The third angle in the triangular battle, Modi rival former BJP patriarch Keshubhai Patel’s regional outfit Gujarat Parivartan Party (GPP) turned in an emotive appeal to the voters asking for their support for a man who fights perhaps the last election of his life and seeks to bring true development to the state of his birth. The GPP is contesting 167 of the total 182 seats in the state.

Rahul was scathing in his attack on Modi. “Unlike Mahatma Gandhi and Sardar Patel who belonged to Gujarat and pursued true democratic policies, listening to the voice of the people, you have a chief minister who dreams only for himself,” the Gandhi scion asserted, as a huge crowd cheered him.

Modi retaliated to this at a public meeting in Surendranagar in Saurashtra saying, “I live in the hearts of six crore people of Gujarat who are my family. Rahul baba will not understand the bond that we share.”

Rahul alleged that there was rampant corruption in the State “that is hidden and this is why a whopping 14,000 applications under the Right to Information Act are pending and the government is no mood to reply.” He added that as many as 10 lakh youngsters in the state are without jobs.

Modi ridiculed this charge claiming that there was a backlog of as many as three lakh RTI applications at the centre and wondered about Rahul's charge of unemployed youth. “Arre Rahul baba, youngsters from every district of the country get jobs in Gujarat, not just Gujaratis. You will not find a single Gujarati searching for work anywhere in the country,” Modi said, amid whistles and cheers from the crowd.

As many as 846 candidates, including 46 women, are trying their luck in 87 constituencies going to polls on Thursday with 1.81 crore eligible voters. The BJP is contesting on all seats, Congress on 84 and GPP on 83, while the rest are Independents. 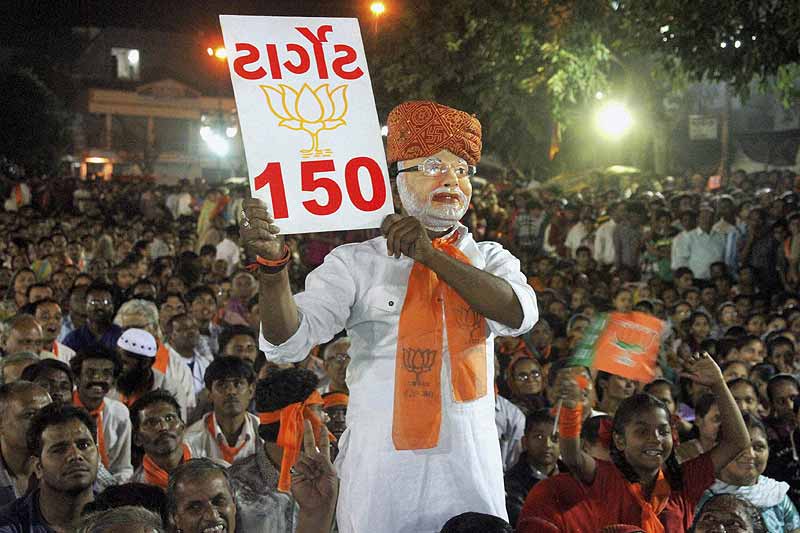 Meanwhile, Mr Narendra Modi was active not only in addressing rallies but also took time out to tweet some targeted potshots at the Congress general secretary:

If Rahul Baba is walking on Gandhiji's path, why is Bapu's 1 wish incomplete - to disband Congress after Independence? nm4.in/124G2oL

Mr. Rahul Gandhi talks of respect for Vidhan Sabha but his own attendance in Lok Sabha between May 2011-May 2012 was 24 out of 85 sittings!

Instead of talking development, Mr. Rahul Gandhi who does not even know the names of Gujarat’s districts is teaching Gujarat history.

Bills passed by Assembly many times are not signed for years at Raj Bhavan, which has become a Congress Bhavan & Cong teaches Guj democracy!

Congress neither has people nor issues in this election! Addressed 3 public meetings in Ahmedabad nm4.in/Rn4qQK