Driving the Porsche 718 range at the experience centre in Leipzig, Germany, teaches us that breaking free needs the most discipline 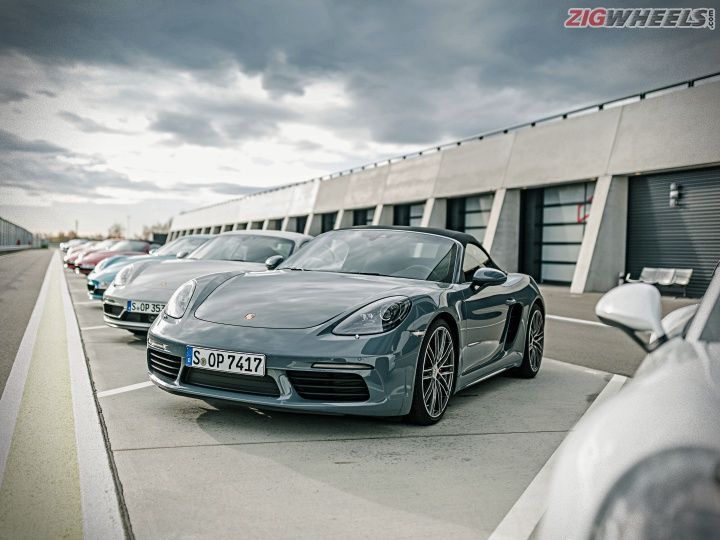 “How can you enjoy this car on regular roads?” It’s a question often thrown at sports car owners who, understandably, are tired of hearing it. But there is some truth to it. You can’t enjoy ALL that a fast car has to offer on public roads. So Porsche whipped up a solution: an experience program that lets you push Porsche’s cars on the brand’s own racetrack under the watchful eyes of professionals. And you don’t even need to be a Porsche owner to partake! 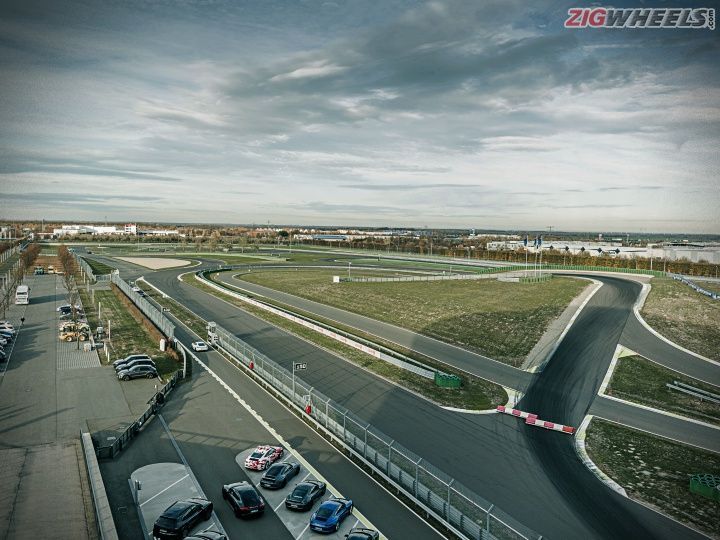 It’s staggering how much thought has gone into designing the FIA certified test track at Leipzig. This is what you get when you combine the best and some of the most challenging sections of iconic global racetracks. And if you aren’t one for motorsport, the drive is guaranteed to make you appreciate the science and strategy behind. 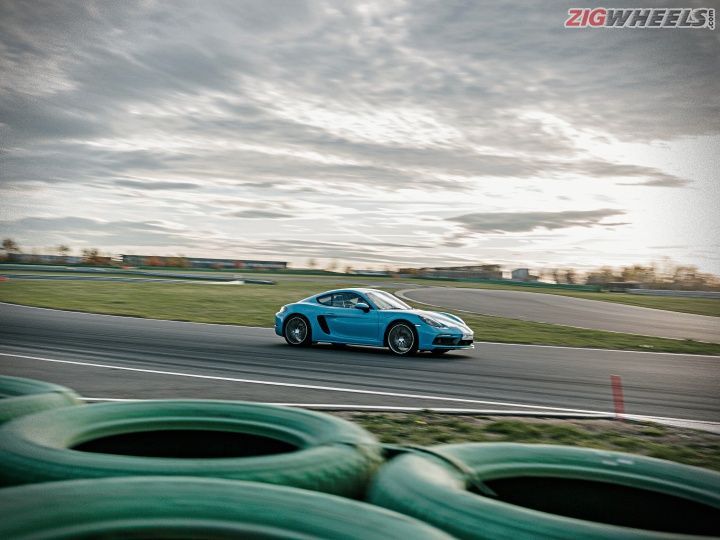 My drive begins with the range-topping 718 Boxster GTS and dives straight into the Parabolica - a 180-degree right hander from Monza that tricks you harder than an email scammer. The harder you try to hold the inside line to clip the apex, the more the car wants to go outside. For many track novices who may give this experience a shot, it’s an immediate lesson that the key to a fast lap time isn’t pushing the throttle through the floor. It’s a lot about doing the exact opposite and being disciplined enough to find the golden balance between grip and acceleration. 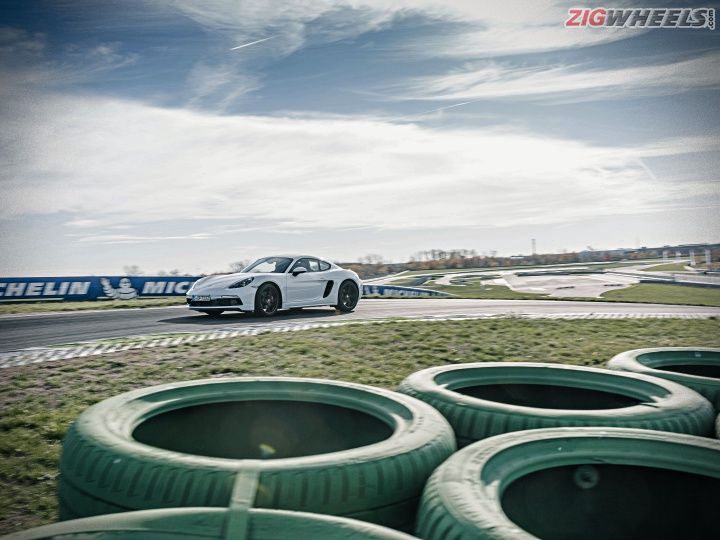 Then, hold the steering steady and blast down towards a right-left chicane from the Nurburgring where you clip the curbs just right to hold the fastest line. Barrel down the back straight and run through the Bus Stop from Spa. It’s a section sure to have even experienced drivers clenching their derriere as you drive dead straight into what is, essentially, a C-bend. In seconds, you exit into Curva di Lesmo, another long sweeping curve from Monza. 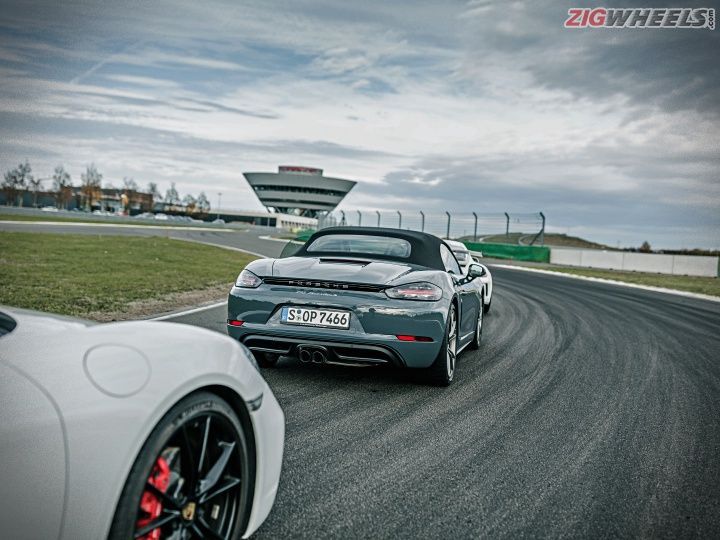 The last challenge is the Suntory Corner from Shizuoka, where you brake hard, downshift, take a sharp left and get on the throttle at the perfect time to launch into the start/finish straight. Push too hard and this is a section that can have you fishtailing even with the electronics being mildly trusting. 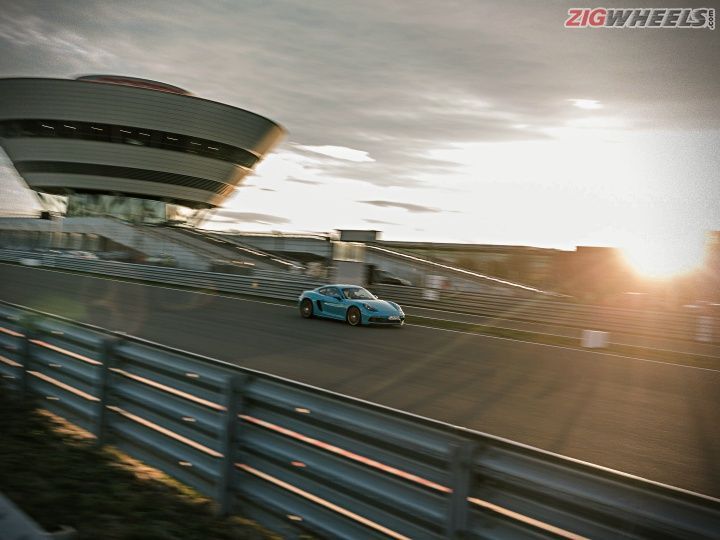 What grows through every challenge is your appreciation for how balanced the 718 range is. The compact size and mid-engined layout help the 718 Cayman and Boxster achieve a near-perfect weight balance. An immediate difference you notice is that unless you’re in Sport+, the 718s aren’t as tail happy as the Jaguar F-Type. There’s also a tangible difference in how the S models handle vs the GTS, with the latter feeling sharper and quicker to steer. 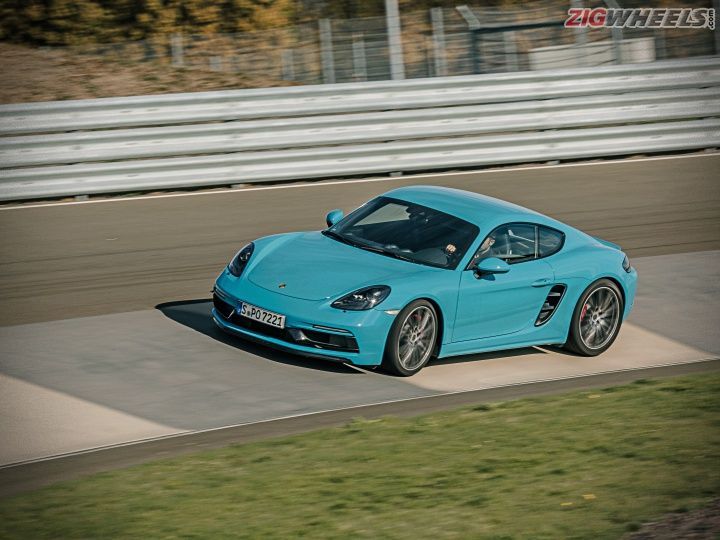 It’s something that becomes very apparent as you go through the infamous Karussell from the Nurburgring, as you dive into the steep banking with lesser steering input in the Cayman GTS. This 180-degree curve is not one to take after a heavy lunch, as the G-forces acting on you only get stronger. Your line of vision is limited to about a car’s length before the banking sharply flattens out, only to cut into a hairpin bend. 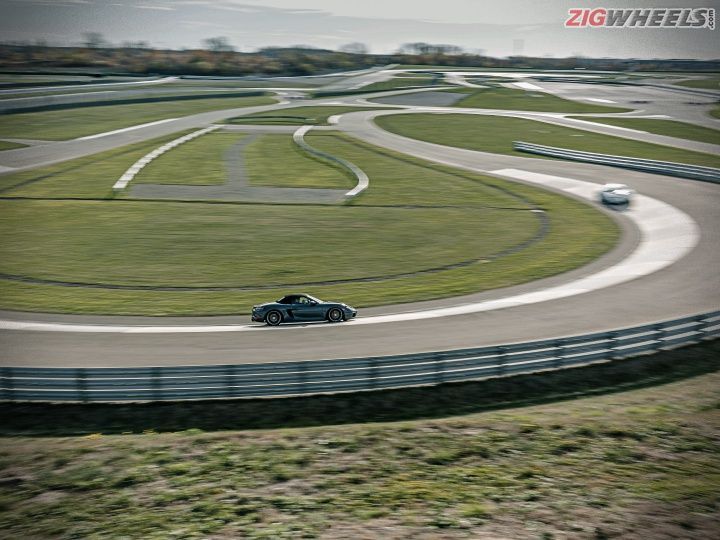 This merry-go-round is quite dizzying but then comes Laguna Seca’s heart sinking Corkscrew. This right-left-right combination drives you up a sharp gradient into an absolutely blind hairpin bend, before you sink into a right-hander, leaving you juggling between understeer and oversteer. But as you torture the tyres and try to keep up with the Porsche instructor in his 911 GT3, the cars, turns and lines get increasingly familiar. And that’s when you find out where the limit is and it’s where you find that these road-legal cars deserve a track treat every now and then. 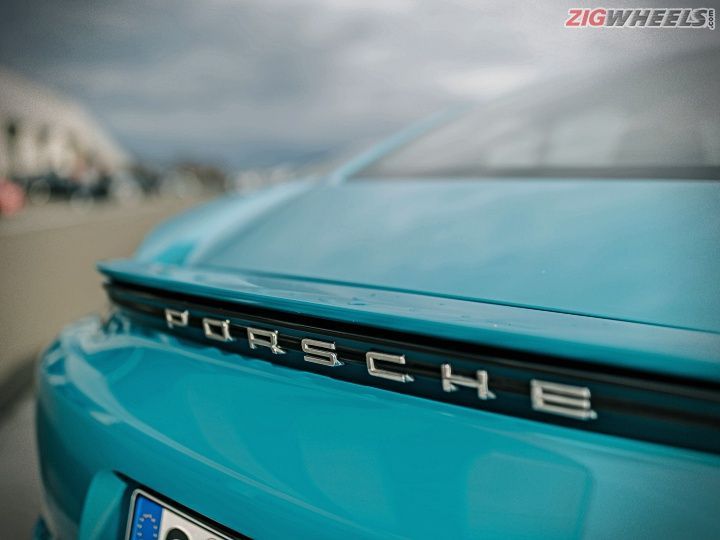 But handling prowess aside, it’s amazing how far engine technology has come. The 718 range employs a 2.0-litre, 4-cylinder engine with output ranging from 300PS to 365PS. The motor may be small, but is incredibly rev happy and sounds pretty good too. 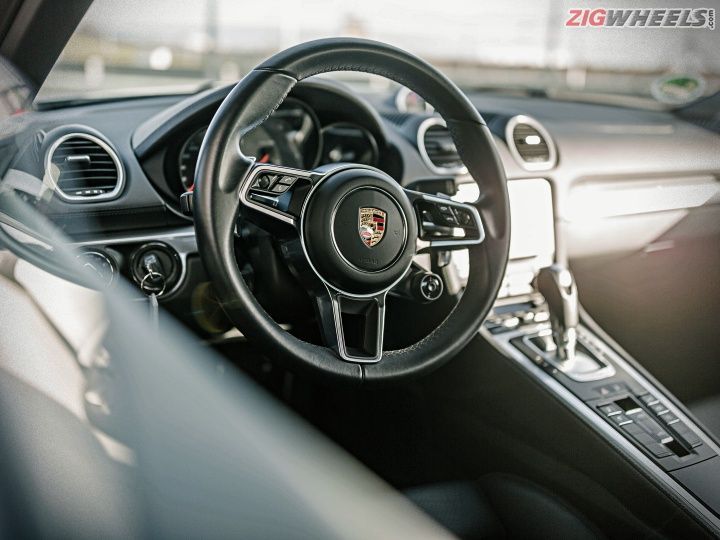 Now, the Porsche 718 cars can accommodate yours truly’s 6’5’’ frame, but only just. Every time I’d turn right my wrist would brush against my knee, making really sharp turns a difficulty. This did become an obstacle in the next, slide-ey sections. 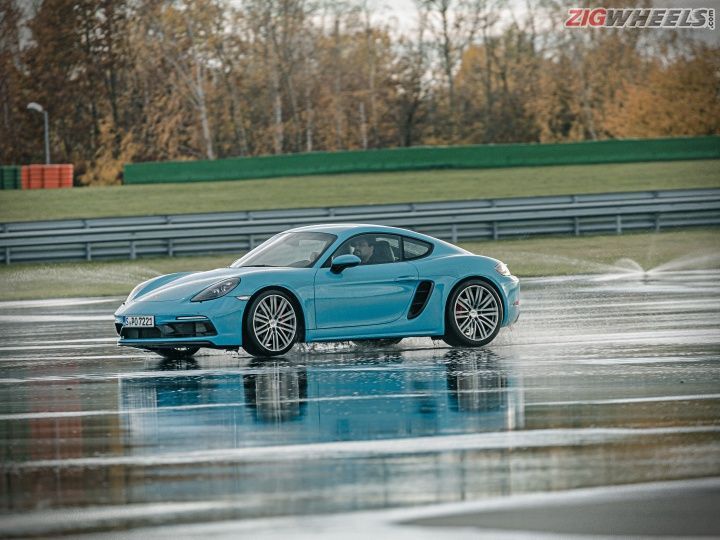 The Porsche 718 drive experience also included a few attempts at a slalom, followed by a go at the skid pad. This giant circle of tarmac is flooded to create a zone of low traction where you learn the basics of drifting. Turns out that even on a slippery surface, drifting is an art of instinct. An art in which, I was clearly a gaijin. 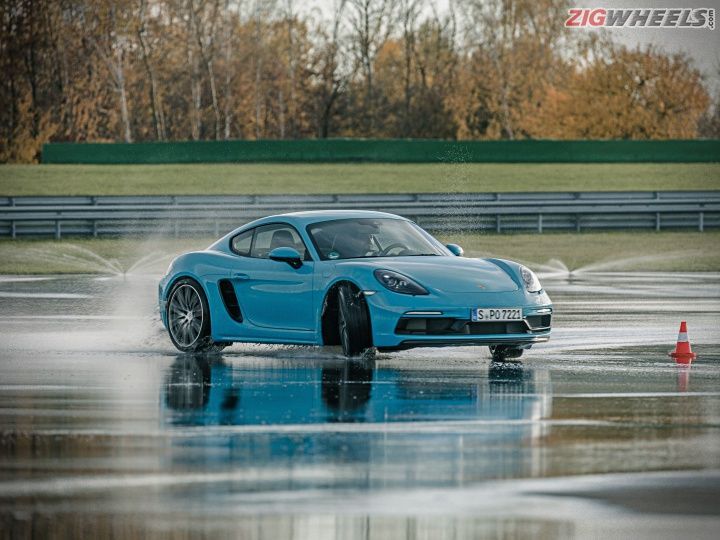 It’s no challenge to get the car to slide, but sustaining it is a delicate dance between the throttle and steering. And as it turned out, in this dance, every participant had two left feet. Another reminder that even something like drifting, which many consider “hooning about”, demands focus and discipline. Heaps of spin-outs later it was time for the instructors to get some payback. 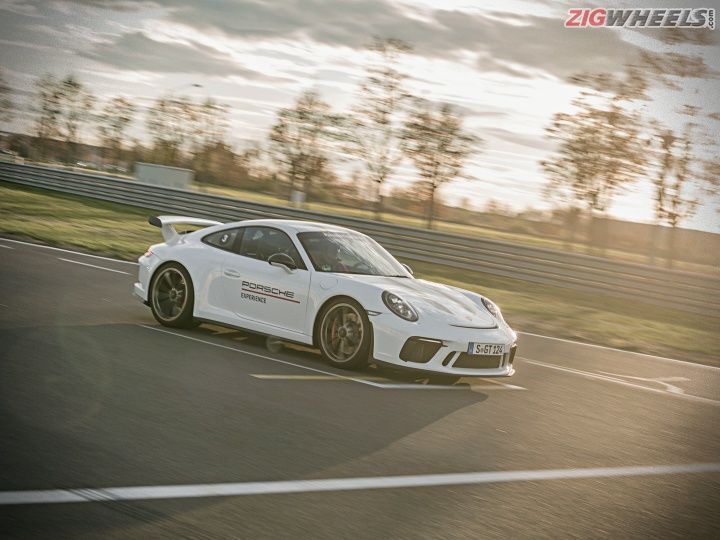 I switch from the driver’s seat in the 718s to the passenger seat of the 911 GT3. The ride that followed was simply humbling. What I considered unhinged driving in the morning with the Cayman and Boxster, felt like slow motion once in the GT3 with considerably more experienced hands at the helm. With the ability to brake later, throttle out earlier, harder and reach higher speeds at the straights, the experience made for the perfect adrenaline boost. 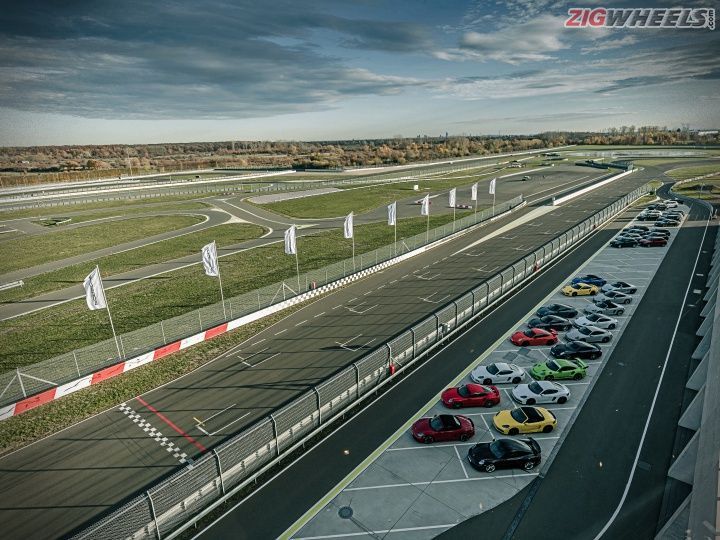 Porsche’s Leipzig track is a marvellous stitch of challenges that truly push both man and machine to the limit. It’s cool to know that the Macan and Panamera aren’t just built at the Leipzig factory but also tested on a track that can put sports cars like the 718s on edge.