Portraits Of Terrorists As Young Men

Maybe the staff at Charlie Hebdo would be alive if George W. Bush and Richard Bruce Cheney hadn’t modelled for the Kouashi brothers how you take what you want and rub out people who get in your way 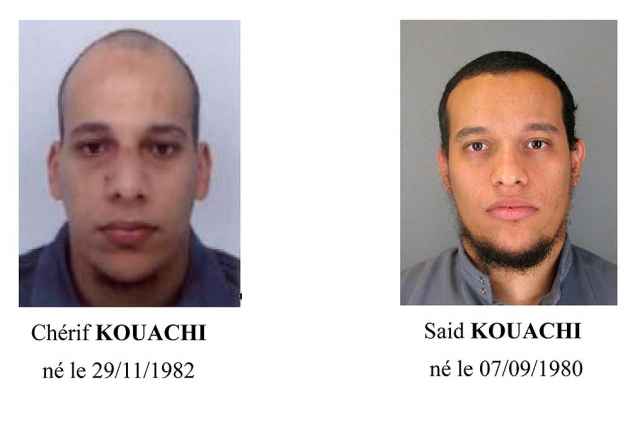 Sharif and Said Kouashi, the two brothers for whom the French police are searching, were born in Paris of Algerian parents, Mokhtar et Freiha Méguireche, according to a profile published by Le Monde. Said was born in 1980. Sharif was born in 1982. The brothers were poor and unemployed. Sharif did not finish school. The Kouashi brothers sometimes delivered pizza to make a little money. They were involved in petty crime as teenagers.

Then in early 2003 at the age of 20, Sharif Kouashi and his brother Said started attending the al-Da`wa Mosque in the Stalingrad quarter. They had showed up with long hair, smoking, and lots of bad habits. The mosque gave them a sense of purpose. Sharif told his later lawyer, “Before, I was a delinquent.”

One member of the congregation at the al-Da`wa Mosque was Farid Benyettou. He was only a year older than Sharif, but was learned in Muslim texts, and taught informal classes at his apartment after prayers at the mosque. The boys began spending time with Benyettou. They stopped smoking, stopped getting high. At his apartment, Benyettou took them on the internet, and showed them images from Bush’s invasion and occupation of Iraq. Sharif said, “It was everything I saw on the television, the torture at Abu Ghraib prison, all that, which motivated me.”

Benyettou ran a recruitment ring targeting young French Muslims that sent them to fight US troops in Iraq. They jogged in a park to get in shape and got rudimentary training in how to handle a Kalashnikov semi-automatic. They would tell their families that they were going to study in Syria. And they would spend some time in hard line Salafi schools. But then they would slip across the border into Iraq.

Sharif was about to go to Iraq in 2005, himself, to fight Bush’s troops there (which he saw as aggressive foreign occupiers), but he and a friend were arrested and interrogated by the French police.

In 2008 he and three others were tried as members of the 19th Arondissement Cell, on charges of funneling a dozen young French Muslims into Iraq from 2003 to 2005 (one ended up in Falluja). They typically joined al-Qaeda in Mesopotamia, then headed by the Jordanian Abu Musab al-Zarqawi. There had been no al-Qaeda in Iraq under Saddam Hussein, whose secret police issued an APB for Zarqawi in summer, 2002. Bush’s invasion and occupation led to the founding of ‘al-Qaeda in Mesopotamia.’

Sharif Kouashi was sentenced to 3 years but only served about 18 months.

When he got out, Sharif Kouashi became involved around 2010 in a plot to break Ismail Ait Ali Belqasim, a notorious Muslim fundamentalist, out of prison. Belqasim was a member of the Algerian Armed Islamic Group, an al-Qaeda affiliate that Usama Bin Laden supported from Sudan, and was responsible for a 1995 bombing of the French Metro (subway).

At some point after 2011, the Kouashi brothers went to Syria to fight the regime of Bashar al-Assad (which the French government also said it wanted to see overthrown). They are said to have returned this summer. Given their past with Zarqawi, they might have been fighting for Daesh (ISIS or ISIL). But since it was kicked out of al-Qaeda, it is also possible that they fought with another group, perhaps Jabhat al-Nusra, the main al-Qaeda affiliate in Syria.

They also may have had experience in, or contacts in, Yemen. Sharif told someone at the scene of the crime that it was done by ‘al-Qaeda in Yemen.’ That would be al-Qaeda in the Arabian Peninsula, the most active affiliate in attempting to pull off operations in the West. It was behind the 2009 underwear bombing attempt over Detroit.

Without Bush’s invasion and occupation of Iraq, it is not at all clear that Sharif Kouachi would have gotten involved in fundamentalist vigilantism. And if he hadn’t, he would not have gone on to be a point man in murdering out the staff of Charlie Hebdo along with two policemen.

Iraq is a major Arab, Muslim country. Its capital, Baghdad, is special to Sunni Muslims because the Abbasid empire built it and ruled from it. Having American troops occupy it for 8 years, humiliate its citizens, shoot people at checkpoints, and torture people in military prisons was a very bad idea. Some people treated that way become touchy, and feel put down, and won’t take slights to their culture and civilization any longer. Maybe the staff at Charlie Hebdo would be alive if George W. Bush and Richard Bruce Cheney hadn’t modelled for the Kouashi brothers how you take what you want and rub out people who get in your way.

Juan Cole is Director of the Center for Middle Eastern and North African Studies at the University of Michigan. He maintains a blog on US foreign policy and progressive politics, Informed Comment, where this piece first appeared. His new book is The New Arabs: How the Millennial Generation Is Changing the Middle East (Simon and Schuster).