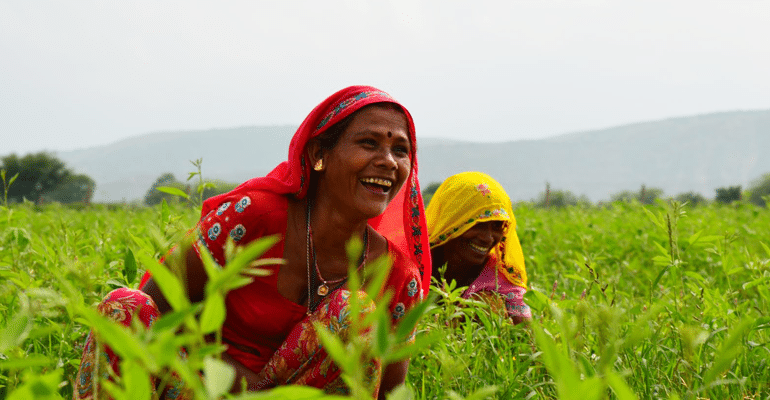 India has made remarkable progress in the past few decades from reducing absolute poverty to becoming one of the fastest growing economies in the world. However, the persistence of malnutrition across the country continues to be a threat to the well-being and development of the nation. And the Covid-19 pandemic has only exacerbated the crisis, with the brunt of the impact, as is often the case, being borne by women and children.

Focusing on women’s nutrition is key to addressing this complex issue since it impacts both their health and well-being, and also that of their children. Undernourished mothers almost inevitably give birth to undernourished babies, leading to a vicious cycle of malnutrition. In fact, given that domestic duties such as managing the kitchen and household continue to remain the obligation of women, their role becomes critical in meeting the nutritional needs of their families as well.

Women are also at the frontline of the delivery of key programmes and services introduced to tackle health and nutrition. The army of Anganwadi Workers (AWWs), Accredited Social Health Activists (ASHAs) and Auxiliary Nurse Midwives (ANMs) – usually local women with close ties to the community – are often the first port of call for any health-related concerns. They have to manage these along with a host of other responsibilities, such as visiting pregnant women and newborn children, providing counselling and supplementary nutrition, educating on immunisation, contraception and sanitisation, and in the case of Anganwadi workers, even giving preschool education.

However, as one moves up the chain, the number of women at the helm reduces drastically. According to a 2021 report by Global Health 50/50 tiled ‘Gender Equality: Flying Blind in a Time of Crisis’, men continue to dominate organisations active in global health: 71% of CEOs and 69% o fboard chairs are men, and among senior management, only 1 in 3 organisations have achieved gender parity.

The low levels of women in leadership is in sharp contrast to the fact that women comprise approximately 70% of the health workforce and deliver a majority of unpaid care work, according to ‘Delivered by Women, Led by Men: A Gender and Equity Analysis of the Global Health and Social Workforce’ by World Health Organization, 2019.

Given that women are the most affected by the malnutrition crisis and also form the majority of the workforce addressing the problem, involving more women on the decision-making table, preferably from the initial design stage itself, would benefit all programmes and interventions. Women are able to draw on their lived experiences to provide greater insight into the factors and considerations that need to be taken into account for successful implementation.

For instance, the socio-cultural norms dictate what and when a woman can eat. In a reflection of their status and power, women in many Indian households usually eat only after men and children have finished eating; they are expected to sacrifice their own food for others; and above this, there are rampant beliefs and taboos that restrict women from eating certain food items, especially adolescent girls, pregnant women and new mothers. For example, in many parts of the country, papaya is believed to cause miscarriage or abortion; and jackfruit, leafy vegetables and eggs are also forbidden.

In addition to bringing in more diverse perspectives, female leaders also more likely to prioritise the needs of women, children and marginalised groups; directly respond to the concerns of the community; allocate funds towards health and nutrition; and increase research in women’s health issues, according to reports like ‘Diversity Begets Diversity: A Global Perspective on Gender Equality in Scientific Society Leadership’ and ‘Why Diversity Helps to Produce Stronger Research.’

The government has recently consolidated several related schemes into an umbrella programme called Saksham Anganwadi and Poshan 2.0. As there is a renewed push towards improving nutritional outcomes, we need to ensure equal participation of women, especially at the state and district levels, where guidelines from the centre are ultimately contextualised for execution.

Malnutrition has serious implications for the future of our country. It has been linked with poor cognitive development, higher mortality, lower learning levels and reduced productivity. The consequences for the individual and therefore the nation are long-term and ultimately irreversible. If we want to change this reality and make sustainable and meaningful progress, women’s voices, expertise and leadership need to be brought to the fore.

(Shagun Sabarwal is India Programme Director at WomenLift Health. She is a former Director of Policy, Training and Communication at Abdul Latif Jameel Poverty Action Lab (J-PAL), South Asia. She has extensive experience of working in the areas of social policy and development research to improve gender equality and health in India. She has a doctorate in public health from Harvard University.)

A synergistic approach is key to achieve better nutrition outcomes

Focus On Tribal Children’s Nutrition Key To A Healthy India

Improving Quality Of Nutrition Services The Way To Suposhit Bharat