Alexandre Lacazette and Gabriel Martinelli were on target as Arsenal beat Sheffield United but lost Bukayo Saka to injury. 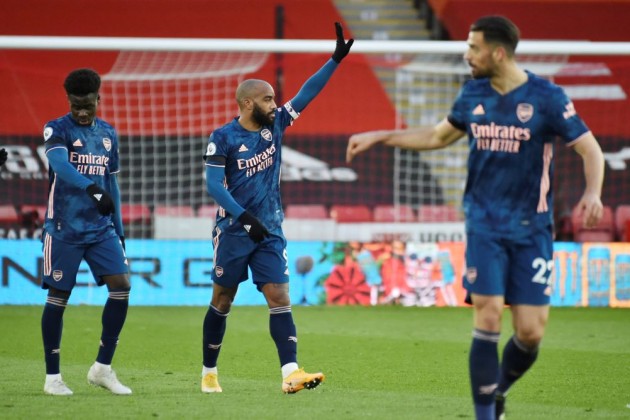 Arsenal cruised to a 3-0 win over Sheffield United in the Premier League but saw Bukayo Saka limp off ahead of their crucial Europa League clash with Slavia Prague. (More Football News)

The Gunners were always in control of Sunday's contest at Bramall Lane, which will surely soon no longer be a Premier League venue given the Blades are near certainties for the drop.

Alexandre Lacazette's superb 33rd-minute opener put Arsenal ahead and, shortly after Saka had departed the stage with an injury, Gabriel Martinelli made sure of the points prior to a late second for Lacazette.

Arsenal are ninth, 10 points adrift of fourth-placed West Ham, but their hopes of Champions League qualification rest on Thursday's quarter-final second leg in Prague, where they must score after a 1-1 draw in the first game.

Saka and David McGoldrick wasted presentable opportunities in the opening 10 minutes before Martinelli fired into the side-netting at the end of an excellent counter-attack.

Martinelli was then denied by Aaron Ramsdale and Calum Chambers saw a goal-bound effort blocked by Enda Stevens before Arsenal deservedly broke the deadlock in style.

Lacazette started and finished the move, laying off for Saka, whose return pass was exquisitely flicked by Dani Ceballos to allow the former Lyon striker to roll into the bottom-right corner.

A largely low-key second half saw Lacazette bend an effort over the bar before Saka came off in some discomfort to give Gunners manager Mikel Arteta cause for concern.

He had reason to smile again in the 71st minute when Martinelli tapped in on the rebound after Ramsdale parried Nicolas Pepe's low shot, with the impressive Lacazette applying gloss to the scoreline in the 85th minute as he latched on to Thomas Partey's throughball and rifled home.

What does it mean? Saka injury sours fine performance

The gulf in class was evident throughout and Arteta will have been thrilled with the manner in which Arsenal dispatched inferior opposition, something they failed to do in the first leg with Slavia.

But there were worried expressions in the Arsenal dugout when Saka came off having not being fouled, the forward seen with ice strapped to his thigh after his 69th-minute withdrawal.

Lacazette brings up his half-century

50 - Alexandre Lacazette is the sixth Frenchman to score 50 Premier League goals for a single club, with four of the six doing so for @Arsenal (also Thierry Henry, Olivier Giroud and Robert Pires). Outpost. pic.twitter.com/tp5N7WdbcJ

United's lack of goalscoring threat was telling throughout and was best illustrated by Oliver Burke, who in 64 minutes playing up front with McGoldrick did not have a single shot or play a key pass.

- In Premier League history, only Chelsea (42) have beaten the side starting the day bottom of the table more than Arsenal, with this win the Gunners' 37th such victory (level with Spurs).

- Sheffield United suffered their 25th league defeat of the season, the most by a non-newly promoted side since Huddersfield in 2018-19 (28). Each of the previous 12 Premier League sides to lose 25 or more matches in a season have been relegated, with 10 of those finishing rock bottom.

- Arsenal have secured their first Premier League victory at Bramall Lane, at the fifth attempt of asking (D2 L2).

- Arsenal are now unbeaten in their last four away games in the Premier League (W2 D2), their longest such run of the season. Indeed, the Gunners have earned more victories on the road (7) than they have at Emirates Stadium this season (6).

- Caretaker boss Paul Heckingbottom has seen his Sheffield United side concede 10 goals during his three Premier League games in charge, the joint-most after a manager’s first three games in the competition, alongside David Moyes (2002, Everton) and Christian Gross (1997, Spurs).

- Martinelli's strike was his first Premier League goal of the season for Arsenal, and his first in 446 days since netting against Chelsea in January 2020.

- Lacazette has now scored 13 Premier League goals this season, 10 of which have come away from home – only Mohamed Salah (11) has scored more often on the road this term.

Arsenal's season hinges on events in the Czech Republic on Thursday, while they could influence the fight against relegation when they face Fulham at Craven Cottage next Sunday. Bottom club United visit Wolves on Saturday, with relegation looming large.