Group Captain Abhinandan Varthaman, who downed an enemy jet during an aerial combat with Pakistan in 2019 and was held captive for three days in that country, was on Monday honoured with the Vir Chakra award by President Ram Nath Kovind. 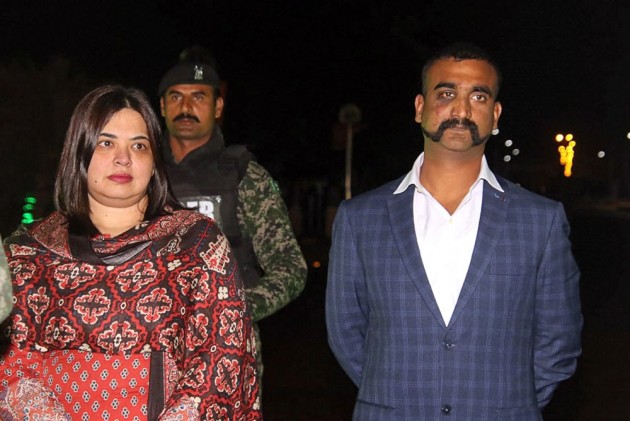 The fighter pilot of the Indian Air Force has been decorated with India's third-highest wartime gallantry medal for displaying an "exceptional sense of duty" during the dogfight, the award citation said.

The award ceremony, held at the Rashtrapati Bhavan, was attended by Prime Minister Narendra Modi, Defence Minister Rajnath Singh and several other dignitaries. Several other military officers were also honoured at the event. Earlier this month, the Indian Air Force approved the rank of Group Captain for Varthaman.

Wing Commander Varthaman (now Group Captain) downed the Pakistani jet on February 27, 2019, before his MiG 21 Bison jet was hit. Pakistan launched retaliation against India for the Balakot airstrikes a day before.

The citation read out at the ceremony said a large force of the Pakistan Air Force fighter aircraft, consisting of advanced fourth-generation F-16 and JF-17, was detected heading toward the Line of Control (LOC) at around 9:55 am that day.

It said Wing Commander Varthaman, displaying exceptional air combat acumen and knowledge of the enemy's tactics, scanned the low altitude airspace with his Airborne Intercept (AI) radar and picked up an enemy aircraft that was flying low to ambush the Indian fighter-interceptor aircraft

It said he alerted the other formation pilots about the "surprise threat", and then consolidated the riposte against the hostile Pakistani aircraft that were attempting to drop weapons on the Indian Army positions.

Wing Commander Varthaman then pursued a retreating enemy fighter bomber aircraft, and in the ensuing aerial combat, shot down an F-16 aircraft with his onboard missile, it said.

"However, in the melee, one of the enemy aircraft fired multiple advanced BVR (beyond visual range) missiles, one of which hit his aircraft forcing him to eject in enemy territory," it said.

The citation said despite being captured by the enemy, he continued to display exceptional resolve in dealing with the adversary in a brave and dignified manner till he was repatriated on March 1, 2019.

"His actions raised the morale of the armed forces in general and the IAF in particular," it said.

The strike by India's warplanes on a Jaish-e-Mohammed terrorist training camp in Balakot and the Pakistani Air Force's subsequent retaliation the next day triggered fears of a war between the two nuclear-armed neighbours.

The government had announced its decision to confer the Vir Chakra on Varthaman in 2019.