"Let us elevate this to a global celebration, using platforms such as the United Nations and other multilateral organisations." 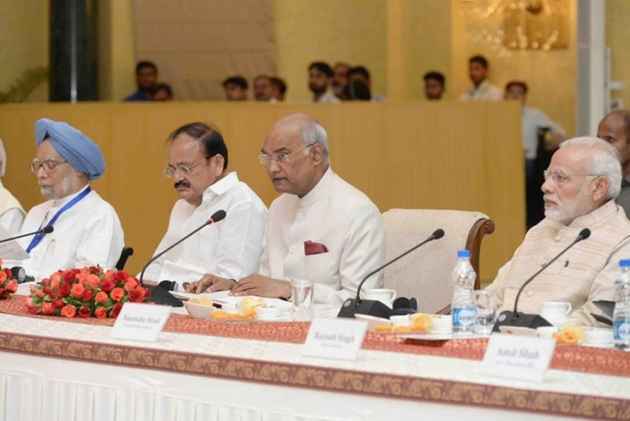 President Ram Nath Kovind and Prime Minister Narendra Modi today pitched for making the commemoration of the 150th birth anniversary of Mahatma Gandhi a global event using platforms such as the UN and other multilateral organisations.

The president, while speaking at the first meeting of the national committee for the commemoration of the 150th birth anniversary of the father of the nation, said Gandhi's principle of 'Ahimsa' was very relevant in today's times with the world facing terrorism and other forms of violence.

Gandhi strived to lead the country to not just political independence, but to a better India and a society free of caste, religious, economic and even gender prejudices, he said.

The president said that the Gandhi's birth anniversary commemoration has a worldwide meaning.

"Let us elevate this to a global celebration, using platforms such as the United Nations and other multilateral organisations. The focus should not just be on events, but on tangible, actionable legacies that will make a difference to the lives of ordinary people -- wherever they may be," he said.

The principle of Ahimsa is very relevant in today's world, which is experiencing violence in the form of terrorism and other conflicts, he said, adding that in such times the values espoused by Gandhi can guide "our planet towards a better future".

"Mahatma Gandhi was India's conscience keeper. The Mahatma is our past, he is our present and he is also our future," the president said.

Gandhi's lessons are relevant in every policy of the country such as Swacch Bharat, rights of women and children, and of civil liberties of small and disadvantaged groups, health and well-being of the Indian farmer and the Indian village.

"...When we battle climate change and promote green, eco-friendly living, we invoke Gandhiji. And what is sustainable development if not an expansion of Gandhiji's simple mantra: 'The earth has enough for everyone's need but not for everyone's greed'," he said.

The prime minister thanked various members of the committee for their constructive suggestions and recommendations and said it was important that this occasion be celebrated in a manner that ensures Gandhi continues to be an inspiration for future generations.

"Globally as well, this occasion should serve to increase awareness about Gandhiji," he said.

The prime minister stressed that all programmes associated with this celebration should be designed around the theme of “Karyanjali” - or “Gandhi in action”. He expressed happiness that the suggestions received today were mostly action-oriented.

Modi said that Mahatma Gandhi and his teachings are timeless and he can become a mechanism for people around the world to understand India.

He said that solutions to several contemporary problems could be found by following the path shown by Gandhi.

The prime minister emphasised the need to use technology in the celebrations, so that the whole world can take note and participate.

He called for the celebrations to move beyond government events and take the shape of a mass movement.

Kovind, in his remarks at the meeting, also said Gandhi was born in India but he does not belong to India alone and remains one of India's greatest gifts to humankind, and his name finds resonance across the continents.

"Mahatma Gandhi was the inspiration for our largely non-violent, inclusive and democratic freedom struggle. He remains the ethical benchmark against which we test public men and women, political ideas and govt policies, and the hopes and wishes of our country," the president said, adding that Gandhi was a multi-faceted person.

"The Mahatma continues to be of significance for all of us in all countries. The world needs to incorporate his ideas in the building of a 21st century that is marked by justice and equality, by peace and wisdom, and by the elimination of poverty," he said.

Following the president's address, several members, including Union ministers, Chief Ministers and others, made suggestions on how the commemoration, which will run from October 2, 2018, to October 2, 2020 – could be planned.

During the meeting, it was resolved to set up a smaller executive committee, headed by the prime minister, to take forward the commemoration.

The committee has a total of 125 members, including 116 from India.

It also has nine international members, including two former Secretaries General of the United Nations -- Kofi Annan and Ban Ki-moon -- and Nobel laureates Archbishop Desmond Tutu of South Africa, and former US Vice-President Al Gore. Today's meeting was attended by 82 members of the committee, including two from abroad.