The Northeast will become the driver of India's growth story, he said, after dedicating to the nation and laying the foundation stone for 22 development projects worth Rs 4,815 crore in election-bound Manipur. 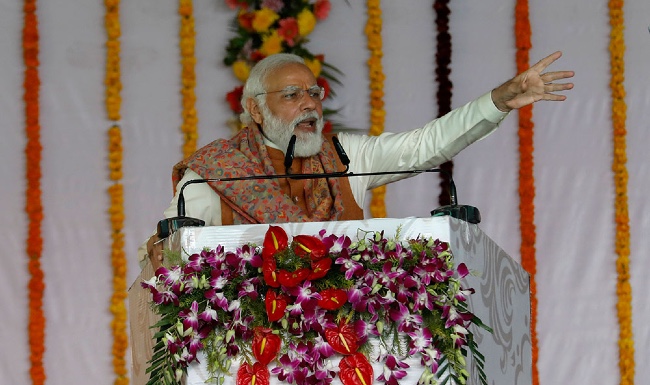 Prime Minister Narendra Modi Tuesday accused the previous governments in New Delhi of neglecting Manipur and the Northeast and creating a "hill-valley chasm", while asserting the BJP-led governments at the Centre and in the state ushered in a new dawn of peace and development.

"The previous governments in Delhi neglected Manipur and the entire Northeast, conspired to create a chasm between the hills and the valleys. Today, there is no fire of extremism and violence. We have brought in a new light of peace and development," he told a public meeting in Imphal.

Modi alleged the earlier governments left Manipur and other Northeastern states to their own devices, resulting in alienation of people. He said ever since he became the prime minister, sustained efforts were made to "narrow the distance". "After I became the PM, I brought New Delhi, the Government of India, to the doorsteps of Manipur and the Northeast. The entire region will become a major driver of India's growth," he said.

Kicking off the BJP's campaign for the assembly elections, the prime minister inaugurated an Integrated Command and Control Centre for the Imphal Smart City Mission, development of western river front on Imphal river, an industrial training institute (ITI) and a 200-bed semi-permanent Covid hospital, among others.

These projects are aimed at development of infrastructure and connectivity, skilling and employment of youth, renovation of places of historic and spiritual importance, and improvement of healthcare facilities.

"Earlier, the policy (of governments before the BJP came to power) was 'don't look east'. They looked at the east only during the elections. 'Act East' is our commitment. Employment and tourism will grow with increased connectivity," he asserted. Modi reeled off data to highlight how central schemes like Ayushman Bharat Yojana and Ujjwala Yojana had benefited the state's population.

"Your one vote changed things for the better. That's the importance of a 'double engine' government. Today, a stable and strong BJP-led government of N Biren Singh helms Manipur, while five ministers from the Northeast are handling important portfolios at the Centre," he said.

Modi said, as a tribute to the freedom fighters of the state, the Union government decided to rename Mount Harriet, an island peak in Andaman and Nicobar island, Mount Manipur. He said sportspersons from Manipur, especially women like M C Mary Kom and Saikhom Mirabai Chanu had done India proud at various events--from Commonwealth games to the Olympics. "They are an inspiration for our youth," he said.

He asked the people of Manipur to resolve not to allow the state to "slip into darkness once again". "We have to preserve this stability and take Manipur to newer heights of development," he said.