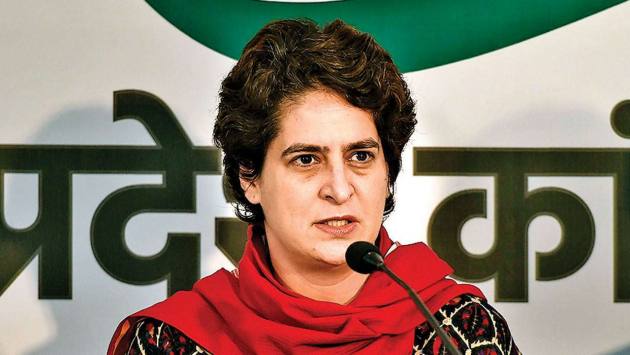 Priyanka Gandhi's comments came a day after PM Modi announced the repeal of the farm laws.

She also sought removal of Mishra from his post over the Lakhimpur Kheri violence in which his son is an accused.

Priyanka Gandhi made the appeal to the prime minister through a letter that she read out in front of reporters.

Reacting to the comments made by Priyanka Gandhi, Uttar Pradesh minister Siddharth Nath Singh mockingly asked her since when the "corporate Congress" has started caring for the farmers.

"For you, the biggest farmer is Robert Vadra, who bought land at throwaway prices from the farmers, and sold them overnight at high prices," Singh said in a statement.

The minister, who is also the spokesman of the BJP government in Uttar Pradesh, questioned the "silence" of Priyanka Gandh on the killing of farmers in the Bastar region of Chhattisgarh and the police lathicharging farmers in Rajasthan. The Congress is in power in Chhattisgarh and Rajasthan.

In her letter to the prime minister, the Congress leader wrote, "Yesterday, while addressing the people of the country, you had said that with true mind and pious heart and keeping in mind the interests of the farmers, an unprecedented decision to repeal the farm laws was taken. If this is true, then getting justice delivered to the families affected by the Lakhimpur Kheri violence should be your top priority."

"But, Union Minister of State for Home Ajay Mishra 'Teni' still remains a member of your council of ministers. If you share the stage in the (DGPs') conference with the father of the accused (Ashish Mishra), then a clear message will go to the aggrieved families that you are still with those persons who are giving patronage to the murderers."

She further said, "If today, your intention is really clear about the farmers of the country, then you should not share the stage with the Union Minister of State for Home, and remove him."

In its Twitter handle, the Uttar Pradesh unit of the party later shared a picture of Union Home Minister Amit Shah with Ajay Mishra and officials at the conference and wrote in Hindi, "...Teni himself had threatened the farmers, after which some farmers were crushed to death. How will justice be done to the farmers?"

The AICC general secretary also urged that cases registered against the farmers in the country for staging protests against the agri laws be withdrawn and financial assistance be given to the families of all those who died during the agitation.

Referring to Ashish Mishra, the Congress leader said, "The entire country has been witness to the cruelty that has been meted out to the 'annadatas' (food providers) in Lakhimpur Kheri. You know that the son of the Union Minister of State for Home is the main accused in running a vehicle over the farmers."

"Owing to political pressure, the Uttar Pradesh government has from the beginning tried to stifle the voice of justice. The Supreme Court has said that it seems the government is trying to save a special accused person," she said.

Violence had erupted in Lakhimpur Kheri on October 3 when farmers were protesting the visit of Uttar Pradesh Deputy Chief Minister Keshav Prasad Maurya to Mishra's native place. Four agitating farmers were run over by a vehicle while four others, including a journalist and two BJP workers, were killed in the violence that ensued.

Priyanka Gandhi also said that she had met the family members of the deceased farmers, and they are in tremendous pain.

"All the families want justice and with the Union Minister of State for Home being in office, they do not have any hope of getting justice. The current situation of the probe in the Lakhimpur violence case proves that the apprehension of the families is correct. Home Minister Amit Shah and Chief Minister Yogi Adityanath have shared the stage with him (Ajay Mishra)," she said.

With the Uttar Pradesh assembly polls round the corner, state minister hit back her and said, "There has been no comments from Priyanka on the murder of farmers in Bastar range of Chhattisgarh. She should tell which of her party leaders have gone there. She should speak about the canecharge on farmers in Rajasthan. If Priyanka speaks two words on the cruelty meted to the farmers in the Congress-ruled states, then it would be good."

He also said that the Uttar Pradesh government is doing everything possible in the case of Lakhimpur Kheri incident, and the farmers have openly expressed their satisfaction.