Four people were killed, two injured and at least one more is still feared trapped under the debris at the mining site following a landslide at the site on early Saturday. The rescue operation is to be continued at least till Monday. 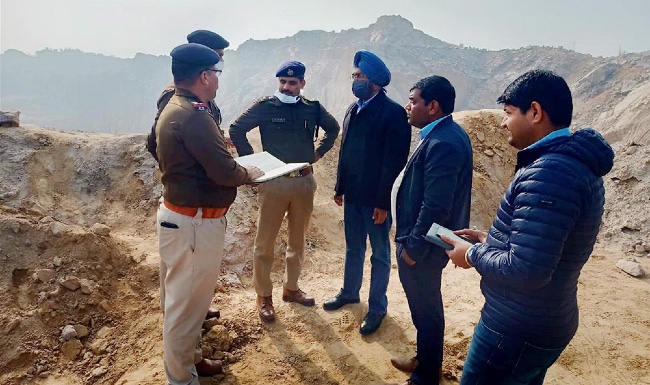 Amid the continued rescue bids for at least one more worker, feared trapped in an opencast quarry mining site at Dadam in Bhiwani after a landslide there, a BJP MP on Sunday alleged violation of several mining parameters at the site.

Speaking to reporters in Bhiwani after visiting the accident site, ruling BJP MP from Bhiwani-Mahendergarh, Dharambir Singh alleged violation of several laid down norms for mining at four sites at least in the Dadam mining zone.

He said he would urge Chief Minister M L Khattar to order a thorough probe into the landslide and its reasons so that such incidents are not repeated. Speaking to reporters in Panchkula on the sidelines of an event, Chief Minister M L Khattar, however, said he has already directed the mining department to find out whether there was any violation of laid down parameters for mining at the site.

"If any violation is found, action will be taken," he said. Bhiwani Deputy Commissioner Rippudaman Singh, meanwhile, on Sunday said the rescue operation at the site was still going on and it was being led by the NDRF. "Four have died in the incident while two were injured," Deputy Commissioner Singh, who visited the site and has been regularly taking stock of the rescue operation, said.

"At least one more person continues to be trapped under the debris," Sub-Divisional Magistrate Manish Phogat said earlier in the day, referring to the register that keeps a record of the workers at the site. The SDM did not rule out the possibility of one odd person such as a helper, being trapped as their records may not have been maintained.

"The rescue operation is likely to continue until Monday afternoon," Phogat said. Shifting big boulders was consuming time, he said, adding there was even fog earlier in the morning, but it cleared during the day. After the incident at around 9 am on Saturday, police had said around half-a-dozen dumper trucks and some machines were buried under the debris.

About the rescue operations, Haryana Home Minister Anil Vij had earlier said several rescue teams, including those from the National Disaster Response Force, State Disaster Response Force and the Army, were pressed into service. Haryana Congress president Kumari Selja, meanwhile on Sunday, demanded a judicial probe, monitored by a sitting Supreme Court judge, it is needed "to expose the mining scandal which was going on".

In a statement, Selja, a former Union minister, alleged that illegal mining was going on in Dadam and deep digging was going on at the site without permission. She said the Congress party demands a financial assistance of Rs 25 lakh for the next of kin of each of those killed in the incident and Rs 10 lakh to those injured.

Holding the BJP-JJP government responsible for the whole accident, former Haryana Chief Minister Bhupinder Hooda had on Saturday alleged that there had been a "scam of thousands of crores" in the Dadam mining zone. "Even the Supreme Court has made a serious remark on this matter and illegal mining is being done in this area by flouting all the rules but the government is not conducting a fair investigation. The opposition demands that there should be a judicial inquiry into the entire scam," Hooda had said in a statement.

Senior Congress leader and MLA from Tosham, Kiran Choudhary, has demanded an independent probe, alleging that the mining in the area has been going on in an illegal manner. Congress leader Randeep Singh Surjewala too had alleged that the illegal mining was going on under the Khattar regime and asked the BJP government who was responsible for these deaths.