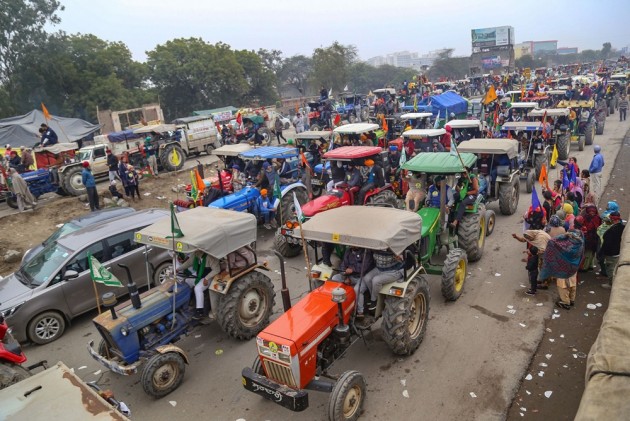 Farmer leaders protesting the Centre’s new laws are mobilising groups of supporters from nearby states to reach Delhi’s borders beginning today (Monday, May 10). They are also planning to up the ante against ruling Bharatiya Janata Party (BJP) in Uttar Pradesh where assembly election is due next year.

“It was farmers’ anger that resulted in the defeat of the BJP in West Bengal (assembly elections). Apart from strengthening our protests in Haryana and Punjab, we’ll start working in Uttar Pradesh and Uttarakhand now,” addressed Darshan Pal, leader of the joint platform of farmer unions, Samyukta Kisan Morcha (SKM).

Despite massive mobilisation and public outreach, the BJP failed to wrest power from the Trinamool Congress (TMC) in the recently concluded West Bengal polls.

While seeking support through a video message, Pal added that the protestors will ensure BJP’s defeat in Uttar Pradesh assembly elections as well, despite the state being considered a BJP fortress.

The SKM is planning a “social boycott” of leaders from the BJP and its allies in the National Democratic Alliance (NDA) and will also display black flags at their events.

Earlier, Bharatiya Kisan Union (BKU) leader Rakesh Tikait urged opposition parties to unite against the BJP. While speaking to a Facebook-based media channel, he claimed, “What happened in West Bengal was a reflection of the angst and resentment among various segments in the country. We saw a similar reaction in the local body elections in UP.”

They also seek boycotts of big corporates who they fear will usurp their produce.

Meanwhile, union leaders on the field are making arrangements for groups of supporters, including women, to reach Delhi on time. Due to the lockdown imposed by states to contain the spread of COVID-19, they are being ferried in private vehicles rather than public transport.

According to the protesting farmer union leaders, the lockdown has been imposed to weaken their struggle against agriculture laws by restricting their movements.

Thousands of farmers are sitting in protest at Delhi’s borders since end-November. Many had returned home to harvest crops, thus thinning the crowd.

They are seeking repeal of the three farm laws, legalising Minimum Support Price (MSP), and revoking the Electricity (Amendment) Bill 2020.

Though they try to remain apolitical, not allowing political leaders or party flags and banners near their protest sites, the farmer leaders have raised a cry to “punish BJP, defeat BJP”.