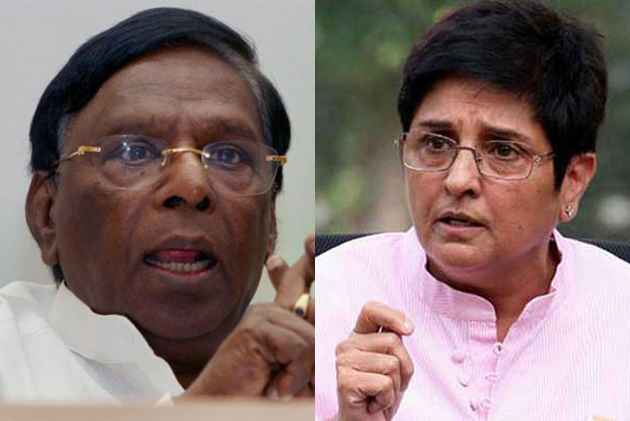 Stepping up the attack on Lt Governor Kiran Bedi, Puducherry Chief Minister V Narayanasamy threatened to sue her for defamation today accusing her of making derogatory statements against him and his ministers.

"After consulting with legal experts, we will decide on filing defamation suit against Bedi" for making "baseless and derogatory statements" against him, ministerial colleagues and officials, Narayanasamy told reporters here.

His statement came a day after Bedi said Puducherry had been "cleaned up" of corruption of a "gigantic scale" by the CBI this year.

Bedi was referring to the CBI filing cases against two IAS officers of Puducherry and 11 other officials on September 20 in connection with the alleged irregularities in admission of students to PG courses in private medical colleges here.

"Prior to festivities we clean our homes... The CBI has done this for Puducherry this year..," Bedi, who has been at loggerheads with the Congress government on several issues, had said in a WhatsApp message to reporters here.

The Medical Council of India (MCI) in July had rescinded admission of 95 students in PG courses in seven private medical colleges in Puducherry for 2017-2018 after finding they were admitted in violation of rules and regulations by the colleges.

Instead of functioning as Lt Governor in keeping with the statutory limits, Bedi was functioning more like a police officer and causing insult to the government by making false and baseless allegations, the Chief Minister said.

He said the officers of the administration, particularly those in the Centralised Admission Committee (CENTAC), which is responsible for selection of students to medical colleges, were functioning "in a very transparent manner" and carrying out in letter and spirit the directives of the Union Health Ministry and MCI.

The CENTAC was responsible for selection of students only. It was the MCI which was the statutory authority to supervise whether the selected students were admitted by the private managements according to the prescribed norms, he said.

Narayanasamy said that if the Lt Governor found any discrepancy or deficiency in the selection of students to PG medical courses, she should have brought it to the chief minister's or the health minister's attention. Without doing it, she was functioning in an "unjustified manner violating all rules and procedures", he charged.

He said he would soon consult legal experts to study the possibility of filing defamation case against Bedi for making "derogatory remarks" against him, the ministers and officials through her WhatsApp messages.

He said that Bedi's specific statement in her WhatsApp asking the officials now facing CBI probe for irregularities in admission that "they need speak the truth whether they were committing irregularities on their own or were being directed to and by whom" is a clear case of instigating the officers.

The instigation was a criminal offence and an FIR could also be filed against Bedi for this, he said.

He said he had met the Union health minister and officials of MCI in Delhi recently and they "praised" the Puducherry government for conducting proper selection of students for PG medical courses.

Narayanasamy claimed that he had sought replacement of Kiran Bedi as Lt Governor during his meeting with the Prime Minister in Delhi recently.

The chief minister alleged that right from the day Bedi assumed office, she had been making allegations against elected representatives and officials.

The Puducherry Assembly had on June 16 passed a resolution for absolute powers to the elected government led by Narayanasamy to check the style of functioning of Bedi.

Last year, the former IPS officer had even threatened to quit her post and leave the Union Territory over non- cooperation by officials.