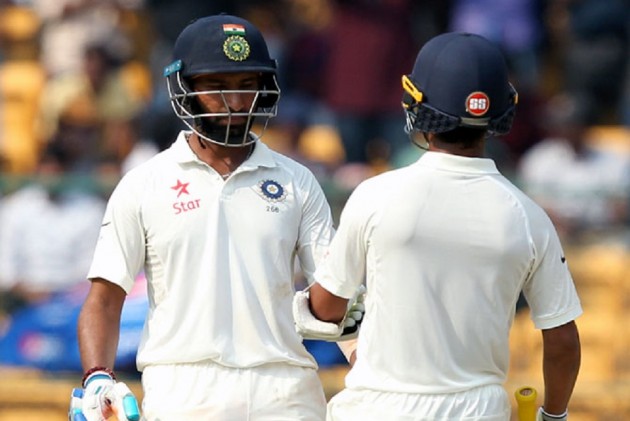 Just a few days ago, none of the eight IPL franchises in their collective wisdom felt that Cheteshwar Pujara was not worth even looking at for the shortest format of cricket. On Monday, he proved that he was worth his weight in gold when it comes to serving India that provides the biggest satisfaction – a stark reminder to those with deep pockets who look into players more than cricketing skill.
Pujara on Monday scored 79 priceless runs to steer India afloat on the third day of the second Test here in Bangalore after the team conceded a crucial 87-run lead to Australia. He was still batting when India finished the day at 213 for four wickets in the second innings, a good recovery from struggling at 120 for four at one stage. India are now 126 runs ahead of Australia and still have six wickets in hand.
Going into the fourth and penultimate day of the match, India on Tuesday will be looking to consolidate the good work done by Pujara (173 balls, 6x4s), Rahane (40 batting, 105 balls, 3x4s) and opener KL Rahul (51, 85 balls, 4x4s).
Pujara was largely responsible for steadying India’s ship as he held one end up to let the team heave a sigh of relief. He was also involved in an unbeaten 93-run partnership with Rahane that lifted Indian hopes and spirit by taking control of the situation as they played out almost 34 overs.
Earlier, KL Rahul for the second time in the match played a vital knock. After being the top scoring with a patient 90 in the first innings, the local boy again came good in front of a cheering crowd despite having a niggle in his shoulder. Rahul and comeback man Abhinav Mukund (16) gave India a decent start to the second innings by putting on 39 runs, before Pujara and Rahane brought life back into India’s campaign, following a mini collapse.
Starting with the fall of Rahul’s wicket, caught brilliantly by captain Steven Smith off left-arm spinner Steve O’Keefe, India lost three wickets for a mere 36 runs in 14 overs, raising doubts about Indian batsmen’s capabilities to stay at the pitch in testing conditions. The other wickets to fall in this period were of captain Virat Kohli (15), who failed to get going for a second time in the match, and Ravindra Jadeja (2).
Jadeja was for some strange reason promoted ahead of Rahane, Karun Nair and Wriddhiman Saha. Whatever the strategy behind his promotion, it failed to bear fruit as pacer Josh Hazlewood, the top wicket-taker for Australia (3/57), castled him for his third wicket so far.
Pujara, till now watching helplessly from the non-striker’s end, found a compatible partner in Rahane, and two stopped the minor tremor.
Australian spinners, particularly off-spinner Nathan Lyon, who ran through the Indian batting line-up, looked quite ineffective as the pitch looked to settle down after threatening at times to go the Pune way on the first two days. Talk of glorious uncertainties of cricket.
Earlier, Australia resumed the third day at 237 for six wickets, with wicket-keeper Matthew Wade (40, 113 balls, 4x4s) and Mitchell Starc (26). They ended up putting up 49 crucial runs for the seventh wicket which, who knows, might prove decision in the end.
Jadeja was the top wicket-taker for India as he bagged the seventh five-wicket-innings haul of his career, ending up with six for 63 in 21.4 overs.
Brief scores: India: 189 and 213/4 wickets in 72 overs (Cheteshwar Pujara 79 batting, KL Rahul 51, Ajinkya Rahane 40 battin; Josh Hazlewood 3/57) Australia: 276 (Matt Renshaw 60, Shaun Marsh 66; Ravindra Jadeja 6/63)