The wall paintings for a promotional video by Puma were made over a month ago on buildings located in a winding lane in Chawri Bazaar, which is endowed with iconic houses and old shops with ornate architecture. 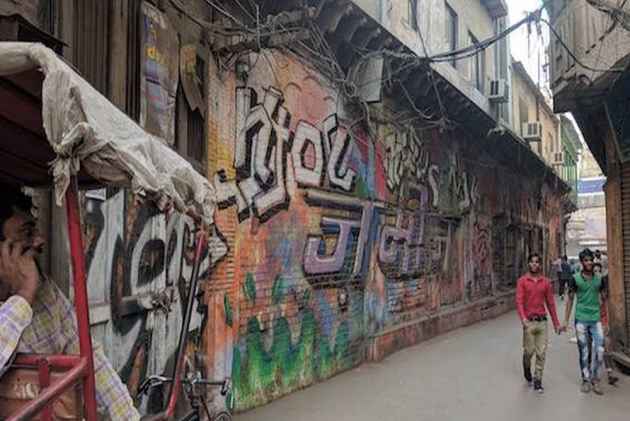 Spray painting on the facade of buildings in a heritage precinct in the Walled City, as part of an advertisement campaign by a global shoe major, has drawn the ire of conservation experts, who have termed the act insensitive.

The wall paintings for a promotional video by Puma were made over a month ago on buildings located in a winding lane in Chawri Bazaar, which is endowed with iconic houses and old shops with ornate architecture.

INTACH Delhi Convener Swapna Liddle, who highlighted the issue on social media earlier this week, said she was aghast when she learnt about the graffiti, which she feared may cause "irreversible damage" to the 18th-century era structures.

"This is not cool, as the ad may profess itself to be. On the other hand, it is a sheer lack of sensitivity on the part of the company, the ad-makers, and all the people who watched silently while the graffiti were being made," she said.

An official spokesperson of Puma, when contacted by PTI, said "multiple partners" were involved in putting the video together.

"We believe all the required permissions were obtained to carry out the shoot. However, given the point raised we are investigating the matter," the spokesperson said.

Dubbed the 'Suede Gully', the over three-minute video, shot in multiple languages and four corners of the country, is a creative endeavour that "captures the grit of Indian streets", the Puma India website said.

"We are proud of our country's heritage and would always act in its best interest as per our knowledge," said the spokesperson.

Anuradha Chaturvedi, associate professor at the city- based School of Planning and Architecture (SPA), said the act was "highly insensitive".

"The whole area has structures dating to the Mughal era and late 18th and 19th centuries. The houses whose walls have been spray painted have foliate arches and aesthetic architecture," she said.

The area had a "unique streetscape" which must be respected, she said.

"While the company talks about street culture in the ad, why couldn't they have highlighted the nuanced living style of the 'galis' in heritage zones like the ones they chose, instead of spoiling its heritage fabric," she told PTI.

The owner of one of the buildings spray-painted for the campaign, however, argued that it was not a heritage spot.

"It is a private property and I am entitled to use it the way I wish to, the colour I wish to paint it with. The paintings in fact are making the decrepit buildings look more beautiful," the owner said.

He also asked why activists and the media did not highlight illegal posters stuck on the walls or dangling electric wires.

"Don't they spoil the look of the place," he asked.

"The case points out that more education and awareness is needed to let people and big companies understand what constitutes heritage," said the former Delhi Convener of the Indian National Trust for Art and Cultural Heritage.

He stressed the need for greater social awareness.

"We also need to make more stringent and focussed conservation laws to prevent such situations in the future," he said.

The video for the ad seeks to capture street culture in Shillong, Mumbai and Madurai, apart from Delhi. It depicts walls of the Delhi buildings being sprayed with paint.

The facades of the Old Delhi buildings have been splashed with giant-sized Hindi letters, a large animal face, a series of eyes and other forms of abstract art.

Balancing Act, a production agency hired by DDB Mudra Group, the creative agency which did the advertisement for Puma, later in a statement claimed, "The owner wasn't aware that his property is protected as a heritage property and hence we were not made aware."

The intention behind this video was to "celebrate local artists" and any disrespect to national heritage properties in India was "completely unintentional" and "we are taking all the necessary steps to restore the heritage site to its original form," it said.