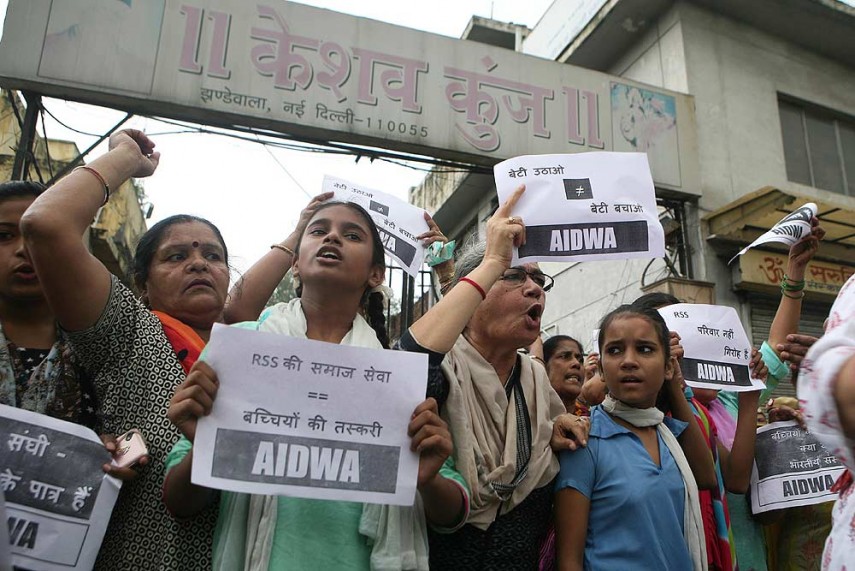 AIDWA expresses shock and protests trafficking of 31 young tribal girls from Assam in the name of education to Punjab and Gujarat to indoctrinate them in Hindutwa in RSS camps, which was flashed by media some days ago. This violates the national and international laws of Child Trafficking. The victim girls belong to Bodo and Santhal communities in Assam's Kokrajhar district. They were all aged between 8 to 14 years. Anti-trafficking unit of Delhi Crime Branch opened it up from the complain lodged by Child Line India Foundation.

The Outlook report stated, “On June 16, 2015, a week after the girls were taken away, the Assam State Commission for the Protection of Child Rights (ASCPCR) wrote a letter (ASCPCR 37/2015/1) to the ADGP, CID, Assam Police, and marked it to the National Commission for Protection of Child Rights, calling this incident ‘against the provision of Juvenile Justice Act 2000’ and concluded that it amounts to ‘child trafficking’. The commission requested the police ‘to initiate a proper inquiry into the matter and take all necessary steps to bring back all 31 children to Assam for their restoration’. The police was asked to submit an Action Taken Report to the ASCPCR within five days of receipt of the letter. No action was taken; no report was filed; no cognisance was taken by the National Commission for Protection of Child Rights, which is monitored by the BJP-ruled Centre.”

On the basis of this report, AIDWA also demands punishing of traffickers who are alleged to be RSS workers in Punjab and Gujarat by the respective state governments.