'The court has ordered that firecrackers can be only burnt between 6.30 pm to 9.30 pm.' 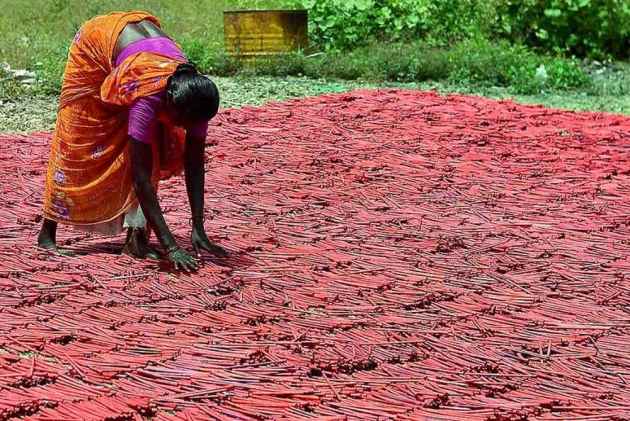 Residents of Punjab, Haryana and Chandigarh can burn crackers only for three hours -- from 6:30 pm to 9:30 pm -- on Diwali, the high court ordered here, days after the Supreme Court banned the sale of fireworks in neigbhouring Delhi and National Capital region (NCR).

Concerned over the pollution from crackers, the Punjab and Haryana High Court today also issued a number of instructions to authorities on issuing of temporary licences to traders in the states and the Union Territory.

However, the division bench of justices A K Mittal and Amit Rawal said detailed guidelines for the future will be laid down subsequently.

"The court has made it clear that the set of instructions are applicable only for this year's Diwali in Punjab, Haryana and Chandigarh. The court has ordered that firecrackers can be only burnt between 6.30 pm to 9.30 pm.

"Deputy commissioners, police commissioners and senior superintendents of police have been directed to ensure strict and meticulous compliance (of the order)," senior advocate Anupam Gupta said.

The high court has also directed the police to ensure adequate PCR vans are deployed for compliance of the directions.

The high court had yesterday issued notices to the two states and the UT asking them to furnish details of licences issued for sale of crackers.

The development comes days after the Supreme Court banned the sale of firecrackers in Delhi-NCR till November 1.

The high court bench had sought the response of the authorities while taking note of the issue of pollution caused by firecrackers and had appointed Gupta as amicus curiae (court's friend) to assist it in the matter.

Gupta also said that as per the court orders, sale and marketing of firecrackers will take place only at places designated by deputy commissioners and not any other place.

The division bench restricted the authorities from issuing permanent licenses without the court's permission and also limited the number of temporary licences to be issued to traders.

"The court has made it clear that no permanent licence for firecrackers under the Explosives Act will be issued henceforth without the permission of the high court," Gupta said.

"So far as giving temporary licenses for Diwali this year are concerned, the total no of such licences, which can be issued for the festival (for a period of 15-30 days), shall not exceed 20 per cent of the number issued last year," he said.

Temporary licences will be issued only by deputy commissioners and this power will not be delegated to anybody else, Gupta said while giving details of the court's directives.

"The temporary licences will be issued through a draw and video-graphed. The draw of lots will take place on October 16 at 5 pm (at designated places in the two states and Chandigarh)," he said.

The advocate said that applications will be entertained up to 2 pm tomorrow and on Sunday and Monday.

"If any temporary license has already been issued for this Diwali, it shall be inoperative," Gupta said.